The Case for Crytids: The Bunyip Australia Wins The Prize For Weirdest Monster 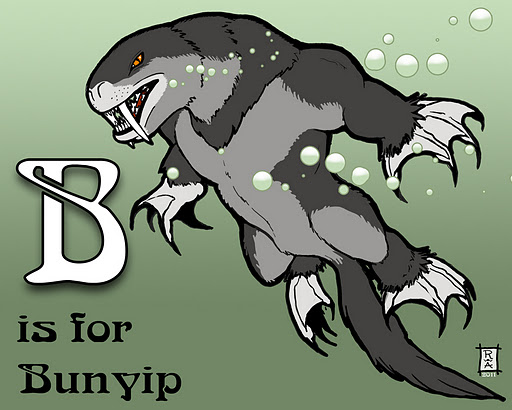 I consider myself well versed in many paranormal topics, but cryptozoology — the study of hidden or unknown creatures — is definitely not my specialty. Bigfoot is probably the most recognizable cryptid in the field, the paranormal’s most popular “monster” if you will. But what the hell is a bunyip?

The bunyip, also called a kianpraty, is the stuff of nightmares. I first became interested in the bunyip after an episode of the Syfy competition show Face Off . Contestants had to create their own versions of a well known (or not so well known) cryptid. The  cryptic created by two of the show’s contestants was a “kitchen sink boogieman” according to judge Ve Neill. The Face Off bunyip was one of the craziest creatures I had ever seen. How did I not know about this?

If there was ever a creature that was just too unbelievable to be real, it was this one. Talk about a mixed bag of crazy, the bunyip takes the cake. 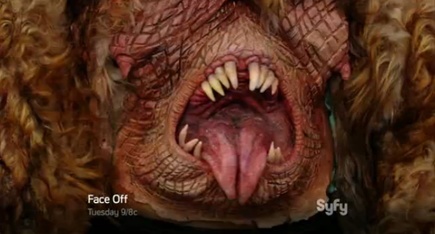 But don’t say that to anyone from Australia; the bunyip is like the unofficial aboriginal mascot.

Some Aborigines believed that the bunyip is a protector, a punisher of sorts, who was sent to Earth to bring justice to those who do evil. Maybe they just made it up to scare the settlers away?

To the people of Australia, the bunyip is more than a myth, more than a legend, it is a real flesh and blood creature. The huge water-dwelling monster has a taste for human flesh, especially that of women, children, and foreigners. Those who stray too close to the edge of swamps and lakes may find themselves face-to-face with the scaly snake-like feathery horned bearded killer. What the heck? 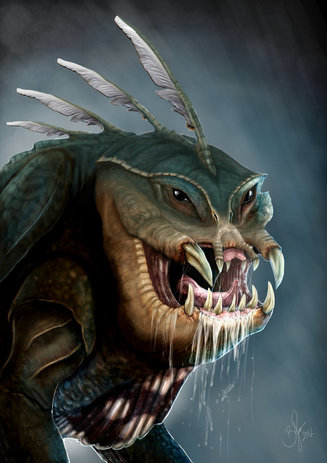 Descriptions of the bunyip vary, ranging from unusual to completely bizarre. Some of the first written accounts reported in “white man’s” newspapers say it had the head of a crocodile with a dog-like face, tail of a horse, tusks, horns, flippers, and with thick dark fur.

Even stranger accounts describe the bunyip as having traits of both a land and a water animal with long claws and thick hind legs. Some say it was a water spirit that takes the form of a giant starfish. And still others claim it has one large eye on its head and a mouth on its stomach, such as the one created on Face Off!

If they left out anything, I can’t imagine what it could be.

But there is another side to this creature, a softer side. The bunyip has become a beloved mascot of sorts to many of Australia’s younger generation. They turned it into a weird and wonderful, cuddly, lovable friend. A family friendly cartoon version has graced the pages of several very popular children’s books. It’s more snuggly than scary, even if it can be a “bad” bunyip sometimes. 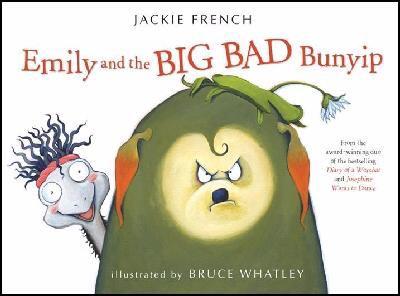 So this creature is so fantastical, so utterly bizarre, it cannot possibly be real. Of all the weird and wonderful cryptid creatures, the bunyip is the absolute least likely to ever be confirmed.

The “evidence” may say otherwise. Eyewitnesses, journal entries, newspaper reports, and even physical findings make a case for the bunyip. It’s not a strong case, but we’ve worked with less.

Large bones found in a Wellington cave were thought to be that of a bunyip. In 1845 strange fossils were discovered that led one newspaper to declare it a new animal. Hey, that’s more physical “evidence” than we have for Bigfoot! 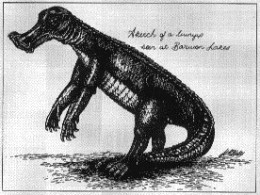 More and more stories surfaced of the strange creature attacking and killing aboriginal people, European explorers, and anyone else who had the misfortune of meeting it. A monster was born. Pictures, or in this case drawings and artist’s renderings, tell the story. It seems there is no consistent version of a bunyip. Maybe that’s what makes it so terrifying.

If the bunyip IS real, then it is the one crytid that I have no desire to ever find. I would love to see more research devoted to finding this creature. It would turn the scientific and paranormal worlds on their ears!

What manner of beast contains so many strange attributes? Is it evolution gone mad or Mother Nature’s practical joke? It’s like a giant mutated platypus that eats people. 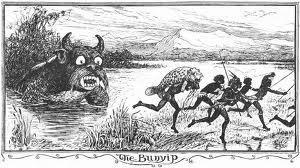 The public’s fascination with the unknown will not soon disappear. The weirder the better. The more elusive something is, the stronger the desire to find it. I predict a new reality show called “Bounty for the Bunyip” coming soon to a cable network near you.