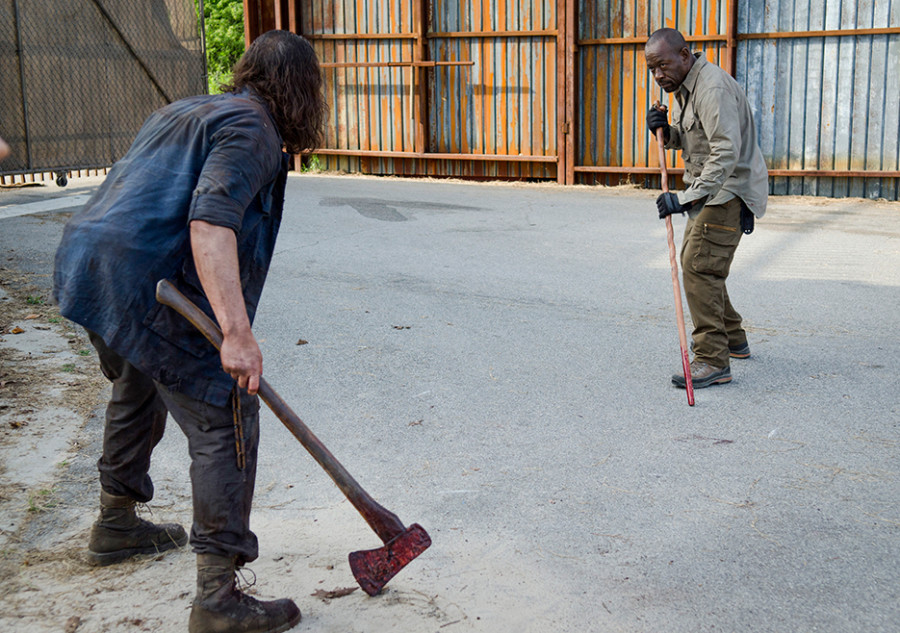 Last night’s episode two of The Walking Dead’s season six, entitled “JSS,” was one of the most startling and viscerally brutal in the show’s history.

While the epic sweep of last week’s zombie roundup and parade unfolded at a tense, stately pace, the unhinged ferocity with which the Wolves descended upon the mostly defenseless citizens of Alexandria — hacking and hewing with a feral bloodlust — was swift, gut-wrenching and without warning. Absolutely no “viewer beware, you’re in for a scare.”

The tracking shot at the episode’s end of the streets liberally littered with bodies, severed limbs, and blood was a vicious, sobering confirmation of every warning Rick had given the hopelessly naive outpost of suburban gentility.

And speaking of Rick, he and his band of zombie herders were nowhere to be seen throughout the ep as we learned the horrific fate of those left inside the walls — with only Morgan, Maggie, Carl, and most importantly Carol, from our core group to defend them — when the fateful horn had sounded at the end of episode one. 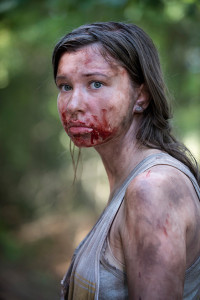 We learned the source of that horn blast from the end of last week’s ep as the horrifying Wolves’ sneak attack — an attack clearly carefully planned and timed to take advantage of the absence of Rick and company — unfolded with only Carol truly appreciating the existential severity of the situation. She slipped seamlessly out of goofy housewife and into ninja assassin mode and dispatched the filthy, debased attackers with an efficiency and élan that bordered on joy.

As Morgan said, you’re not supposed to LIKE killing, but is it wrong to take a certain satisfaction in being so damn good at what is now an essential skill set? Or is there no place for a “happy warrior” among the “good guys”?

We also learned Carl’s friend Enid’s “JSS” (“Just Survive Somehow”) backstory as she was orphaned by the apocalypse, wandered the land as civilization slipped away, and yielded fully to feral survival mode as she graphically ripped a poor turtle to shreds with her bloody bare hands and consumed it raw.

And she may have been a mole for the Wolves within Alexandria, helping to enable the attack. Poor Carl – that boy can’t catch a break.