Music and the Paranormal – Ghosts Seem to Dig the Tunes From aesthetic theory to rock 'n' roll ghosts, The 27 Club to the shaman's drum 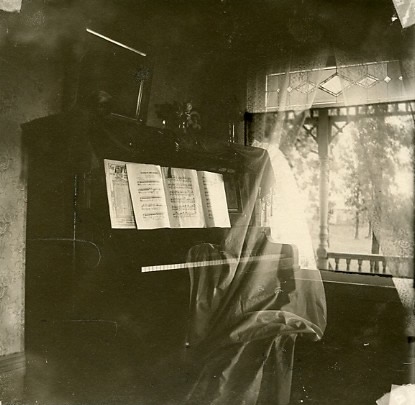 I was honored to do a little Halloween talk today at my alma mater Wittenberg University, on a lovely fall day in Springfield, Ohio. My topic was Music and the Paranormal, two of my favorite individual topics that also have a fascinating relationship with each other. 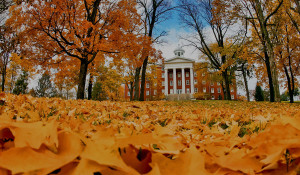 Among the topics in the talk are the nature of music and ghosts, both derived of personality and energy; and the aesthetics of music, described by philosopher Susanne Langer as having the “forms of human feelings, the tensions, ambiguities, contrasts, and conflicts of our feeling life.” In other words, “music sounds like emotions feel,” thus anchoring music to the very core of our beings, tied in memory to our most fundamental experiences and feelings.

So if people have this relationship with music, imagine how ghosts — who seem to be very little BUT memory — feel about it.

Music also acts as a conduit to the spiritual plane for virtually all religions on the planet; from the shaman’s drum, to the Buddhist’s chant, to the Christian’s hymns, music seems a not-so-secret passageway to the divine.

Additionally, I have run across a number of instances where music and specific hauntings are enmeshed. As detailed in the America’s Most Haunted book, at a recent recreation of the original 1882 opening of the Knickerbocker Hotel, in Linesville, PA, when a pianist began playing music of the era, an apparition in the form of original owner Milo Arnold emerged from a wall, took a look around, nodded approvingly to the piano player, then disappeared.

At Bobby Mackey’s Music World in Wilder, KY, the famous “haunted honky tonk,” someone really wants to hear “The Anniversary Waltz” since there are multiple reports of the club juke box playing the tune, even when it’s unplugged and even after the record was removed from the box! At the Stanley Hotel, haunted inspiration for Stephen King’s The Shining, one of the most common paranormal reports is of original owner F.O. Stanley’s wife Flora playing her Steinway piano with unseen hands.

Finally and not coincidentally, today my article on the mysterious The 27 Club was published on Cleveland.com.

Here’s a little taste before you click over to its full glory: 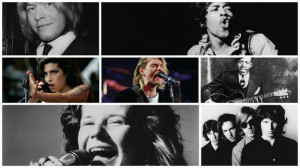 Why have so many young musicians, including some of the biggest stars on Earth with everything to live for, died at the tender age of 27? The phenomenon is so pronounced there’s a name for it: The 27 Club.

Is there a curse? Is there a rift in the space-time continuum? Did they make pacts with the devil that expired at age of 27? This close to Halloween one is tempted to seek a supernatural explanation for such an actuarial oddity. Under a more rational light, it seems likely that those who abuse themselves with the tenacity of these individuals have a built-in expiration date. Drugs, alcohol, debauchery, dissolute life on the road – all magnified by youth’s presumption of immortality. One can only tempt fate so many times before fate retaliates with finality, and that seems to happen a lot at age 27. 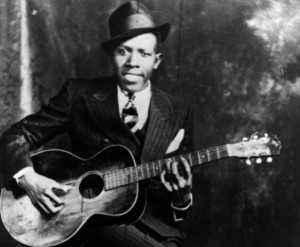 Robert Johnson – The honorary founder of the 27 Club, Johnson as poisoned by a jealous husband in 1938 as he was establishing himself as the most important innovator in blues history.

As a teen Johnson was a pedestrian blues singer, guitarist and harmonica player in Robinsonville, Mississippi, backing much brighter lights like Son House. Then, when he was 19 and she was 16, his wife died in childbirth, and Johnson, in an effort to walk off his pain or perhaps because he had nothing better to do, set off wandering the Delta.

A year later Johnson returned to Robinsonville with a new sense of gravity about him. At the roadhouse, the Son House band took a break and most of the crowd filed outside for some air. All chatter stopped as Johnson took to the stage and a strange, utterly original duet began between the singer and his guitar, creating a music wracked with pain, yet supple and thrilling to behold, almost like magic.

Word quickly spread that Johnson had sold his soul to the devil at the crossroads to gain such otherworldly artistic grace, and songs he wrote like “Cross Road Blues,” “Hellhound on My Trail,” “Me and the Devil Blues” did nothing to dispel the myth.

My talk concludes with my real life ghost encounter during a Halloween party my senior year of high school in Chagrin Falls, which I, also not coincidentally, told to The Lineup for their Halloween podcast. Take a listen here!