The Myrtles Plantation: Who’s the Ghost Girl in the Window? 18th century rural Louisiana estate haunted by the ghosts of the past 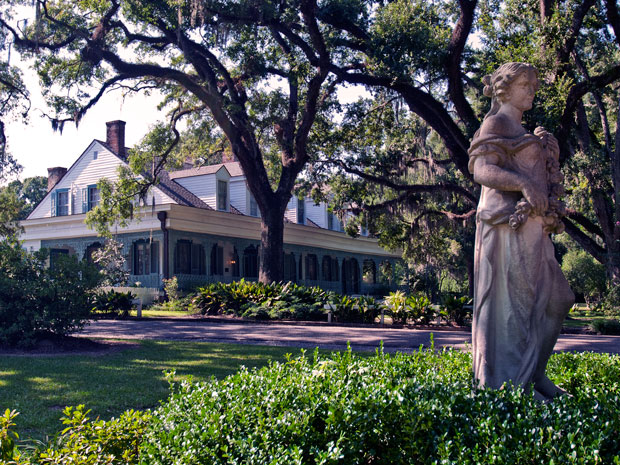 It all started with a picture. A few years ago, while on a school field trip, a teacher and her students posed for photos in front of Louisiana’s historic Myrtles Plantation. Later, when the teacher went over her photos, she noticed a chilling guest in the snapshot below: A little girl, dressed in her Antebellum best, lurked amid the curtains in the window behind them. 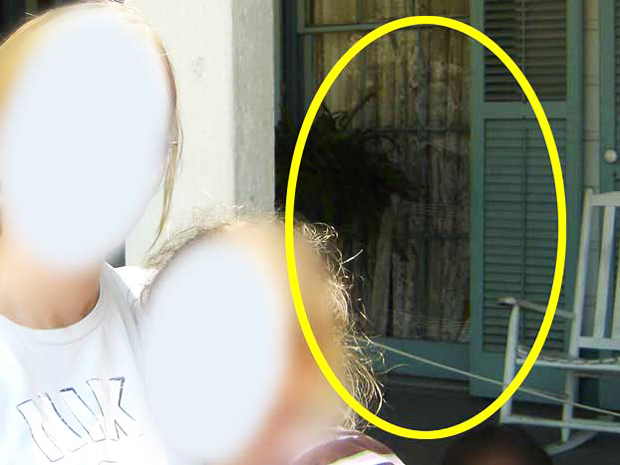 One could write off the whole thing as a scam—an amateur project anyone with an ounce of Photoshop know-how could whip up. But look closely. The girl is clearly behind the frame of the window, yet the bottom of her dress seems to extend beyond the glass.

To get to the bottom of the ghostly shot, we’ll need to peer into the haunted history of the Myrtles Plantation itself. Let’s investigate.

Nestled on a hill of blossoming myrtle trees and bushy azaleas in St. Francisville, Louisiana, The Myrtles Plantation appears stuck in time. Dating back to 1796, the property has survived war, multiple owners, and countless deaths. Today, the mansion serves as a quaint B&B, open to those who prefer a little supernatural mystery with their eggs and coffee. 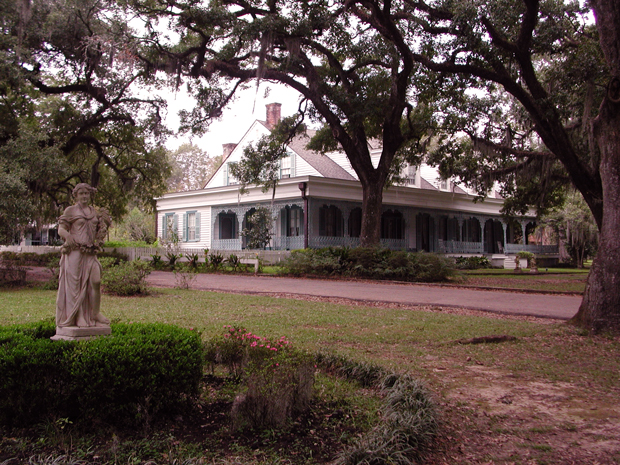 Indeed, the Myrtles Plantation is known as one of the most haunted hotspots in all of America. Sightings have occurred across its sprawling grounds, through its 28 rooms, and along its 125-foot ironwork veranda. Reports include broken clocks that tick, beds that shake and levitate, footsteps that range from pitter-patter to aggressive pacing, portraits whose expressions change, and a French-style Baccarat crystal chandelier that sways and jingles even when every window is shut.

Reputedly built over an Indian burial ground, the plantation is said to be swarming with ghosts, their untimely deaths due to hangings, poisons, gunfire, and more. One ghost in particular is that of Chloe, a house servant from the 1800s who, as legend has it, carried on an affair with the plantation’s owner Judge Clark Woodruff. 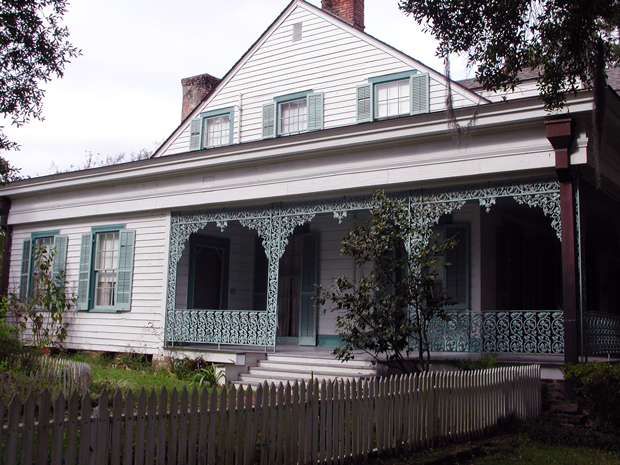 When the owner’s desires ultimately moved on to another servant, Chloe worried she’d be sent away from the house and forced to work the fields as a laborer. So she hatched a plan. Chloe baked a pie laced with poison and then served the dish to Woodruff’s daughters. The lethal additive would sicken the girls and the Judge would need Chloe to nurse his children back to health.

Of course, the scheme backfired; the daughters died from the poisoned pie.

Chloe’s fellow slaves caught wind of her botched plan. Fearing guilt by association, they took matters into their own hands. In the dead of night, the slaves accosted Chloe in her sleep; they dragged her from her bed, hanged her, and threw her lifeless body into the Mississippi River.

Numerous organizations have investigated the mystery of Chloe’s spirit. National Geographic Explorer even went so far as to declare the below photo taken in 1992 to indeed be that of Chloe’s apparition hovering between the General’s Store and the Butler’s Pantry. 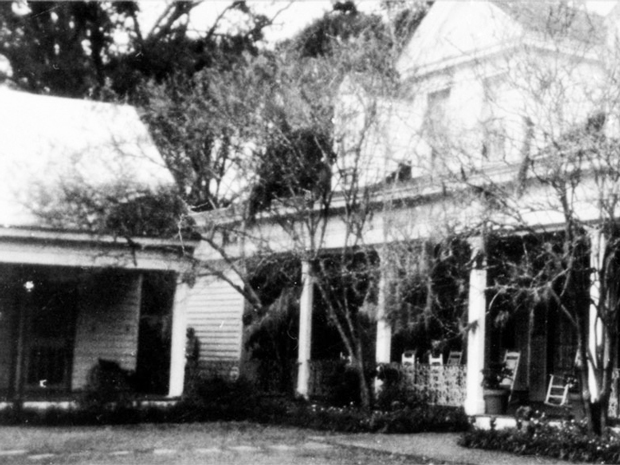 But what about that other little girl?

The owner of the picture sought the expertise of paranormal researcher Dave Young of Paladin Paranormal. Intrigued, he got a second opinion from the Society for Psychical Research in London, England, a highly respected organization, which was founded in 1882 and has attracted such notable members as ultimate skeptics Harry Houdini and Sigmund Freud. Per the photo, the SPR could find no traces of chicanery and declared the image authentic.

Research into the little girl’s identity continues. Perhaps the most interesting hypothesis is that the apparition belongs to a young girl who died in 1868, despite the efforts of a Voodoo practitioner to save her. Lore has it that today the girl practices Voodoo of her own on anyone brave enough to fall asleep in the room where she resides. 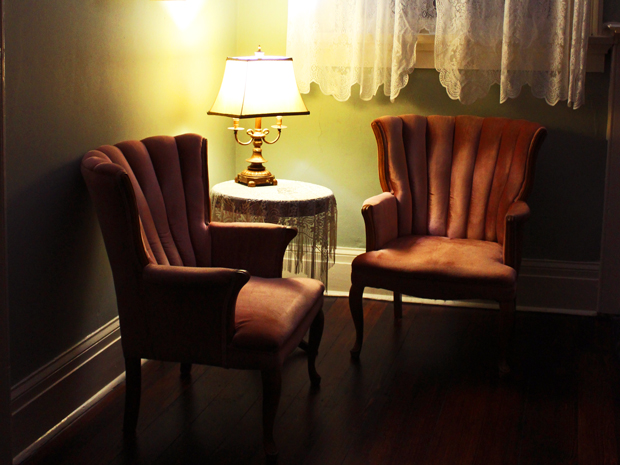 After some proverbial digging—and sifting through piles of nay-saying comments on the Myrtles’ skepticism-welcome Facebook page—we learned that the girl in the photo bears an striking resemblance to a girl featured in an antique painting hanging in the mansion’s game room. According to one version of the Chloe legend, this room is precisely where Woodruff’s children were poisoned.

As we delve deeper into this mystery, each question is met with yet another ponderable. Is the girl in the window the same girl in the game room painting? If so, then who’s the girl in the painting? And why do infrared lights reportedly show a bloody handprint on the wall near it?

We may never know. Like Chloe’s spirit, the girl in the window may be yet another ghostly legend that haunts the grounds of the Myrtles Plantation. 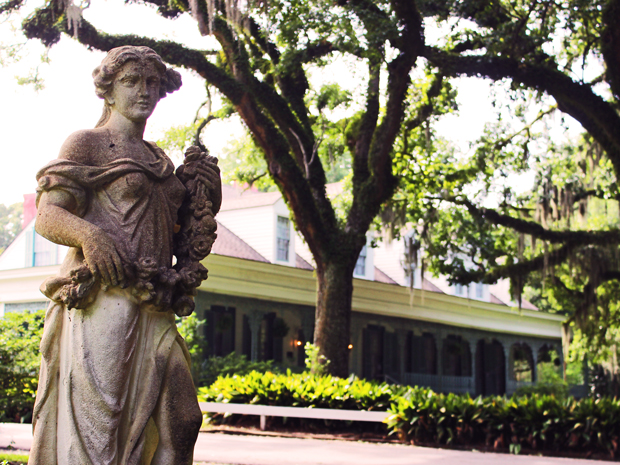 16 MOST HAUNTED B&BS IN AMERICA

ESME: THE OTHER FRIENDLY GHOST