Hand of Glory – Macabre Magic According to legend, the dried and pickled hand of a hanged man possesses sinister powers 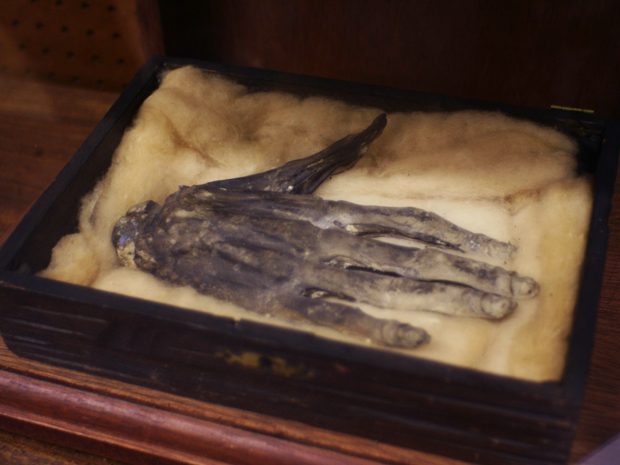 Anyone who’s heard of the Hand of Glory raise your, um, hand.

Perhaps you’re familiar with these ghastly magic items—the severed hands of fiendish men that are pickled and dried and turned into talismans. Such objects frequently appear in role-playing games like Dungeons & Dragons and Pathfinder, providing an extra place for characters to wear a magic ring. Yet the Hand of Glory has a long history in folklore, myth, and fact—and is said to provide far more sinister powers than a few extra digits.

The folkloric Hand of Glory dates back to at least the 1600s, where it is mentioned in grimoires like the Petit Albert  of 1722 and the Compendium Maleficarum, a manual for witch hunters published in Italy in 1608. Methods of creating the Hand vary, as do its purported magical properties, but virtually all of them involve the severed hand of a hanged criminal, or sometimes the severed hand of a dead child. 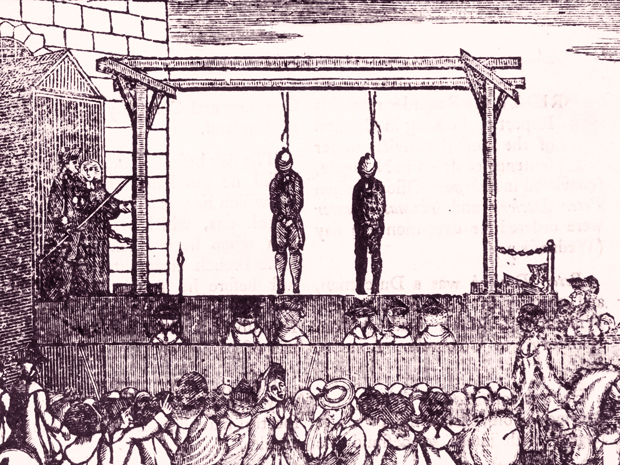 The Petit Albert—likely inspired by the writings of St. Albertus Magnus—offers the following recipe for creating a Hand of Glory, as was later cited by Grillot De Givry in his book Witchcraft: Magic and Alchemy.

Take the right or left hand of a felon who is hanging from a gibbet beside a highway; wrap it in part of a funeral pall and so wrapped squeeze it well. Then put it into an earthenware vessel with zimat, nitre, salt, and long peppers, the whole well powdered. Leave it in this vessel for a fortnight, then take it out and expose it to full sunlight during the dog days until it becomes quite dry. If the sun is not strong enough, put it in an oven with fern and vervain. Next make a kind of candle from the fat of a gibbeted felon, virgin wax, sesame, and ponie and use the Hand of Glory as a candlestick to hold this candle when lighted …

Present-day practitioners may find it difficult to reproduce this recipe at home. Not only is it rare to spot a gibbeted felon ripe for dissecting, you’ll soon discover that your local grocery store doesn’t sell zimat or ponie. In fact, even Gillet De Givry was a little unclear on what those two words meant, speculating that “ponie” may have referred to horse manure.

If you do manage to cook up a Hand of Glory, though, they can be pretty, well, handy—especially if you’re a thief. The most common account of the Hand of Glory’s powers suggests that a burning candle gripped in its dead fingers—made from the fat of the hanged man himself—immobilizes anyone in a house or building, or anyone but the wielder who possesses it.

Other versions claim that the candle unlocks doors, burns brighter when in the presence of treasure, or provides light only for the wielder. You can see how all of these would be helpful for thieves! 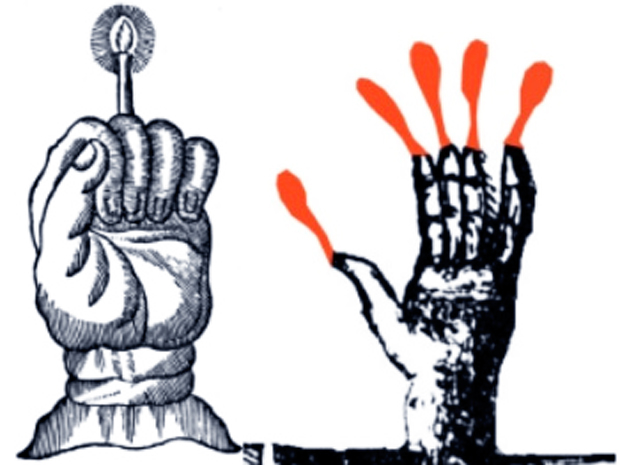 Luckily, there are ways to protect from the effects of a Hand of Glory. According to the Petit Albert, you can render a Hand of Glory ineffective by rubbing the threshold of all your doors and windows with an unguent made of the gall of a black cat, the fat of a white hen, and the blood of a screech owl.

Some modern researchers now think that the notion of the Hand of Glory entered the lexicon as a kind of “lost in translation” moment, when the word “mandragora,” or the mandrake root, was brought to French as main de gloire. Nevertheless, that didn’t stop real Hands of Glory from appearing in English folklore and actual homes.

English folk history tells of a Hand of Glory being used in an attempted robbery of the Spital Inn in North Stainmore in 1797. What’s more, there’s an actual Hand of Glory housed in England’s Whitby Museum. The macabre relic was found walled up in a cottage in Castleton in 1935 by a local historian. According to newspapers like the Bladen Journal and the Express, it’s the last genuine article in existence. 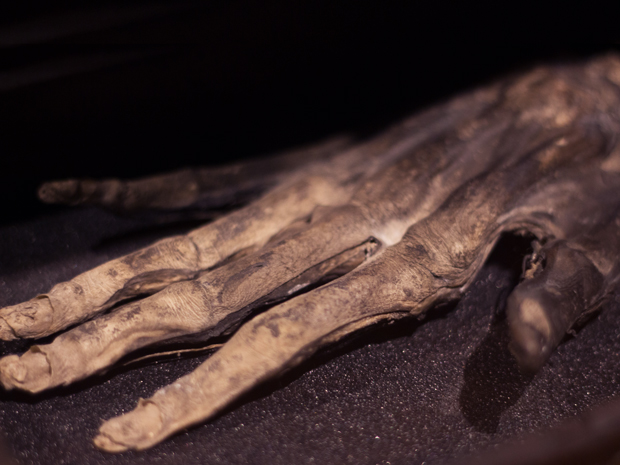 Don’t tell that to the innumerable people who continue to work Hands of Glory into popular culture. The Hand of Glory has surfaced in Hellboy comics, Harry Potter books, Neil Gaiman’s Neverwhere, and numerous movies and TV shows. There are even songs about it from Rage Against the Machine and the Smithereens.

Clearly, the Hand of Glory’s grip on our collective imagination is as strong today as it ever was, and shows no signs of letting go.

MADAME DELPHINE LALAURIE: THE MOST EVIL WOMAN IN NEW ORLEANS

MEMENTO MORI: REMEMBERING THE DEAD AMONG US

THE MUMMY MUSEUM OF GUANAJUATO