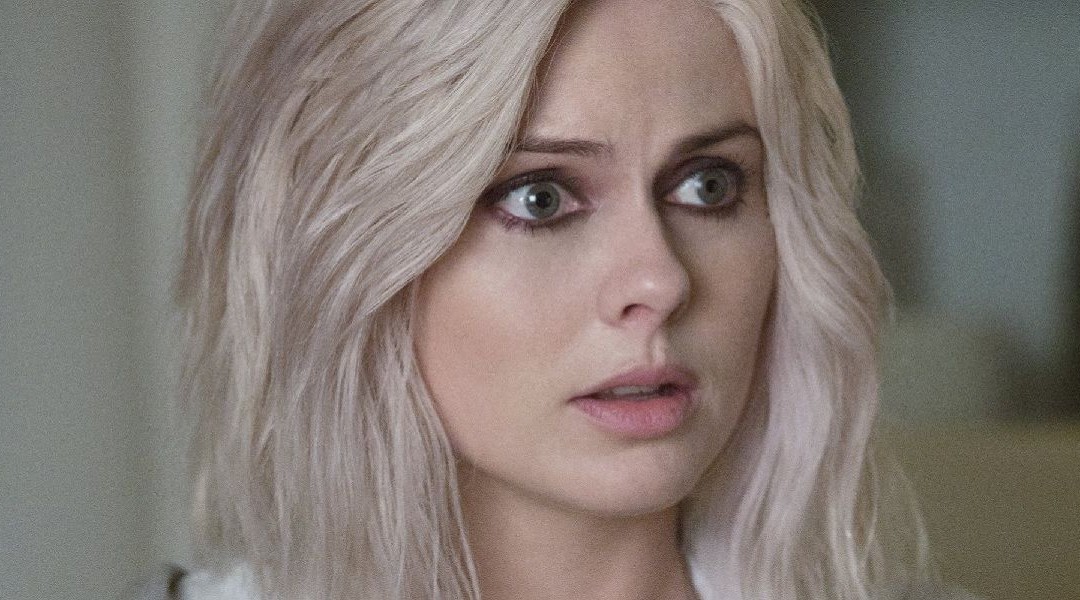 This is the Golden Age of zombie television. Of course there is the raging juggernaut known as The Walking Dead. Syfy’s Z Nation has latched onto me with its verve, wit and creative take on the rules of the genre, but the real outlier is The CW’s iZombie and the emergence of the Pretty Zombie. 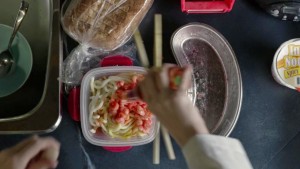 For those who haven’t caught this engrossing horror-romantic dramedy-police procedural show yet, now in its second season, the gist of iZombie (loosely based on the comic series of the same name) it is that plucky Seattle medical resident Olivia “Liv” Moore (lovely Rose McIver) is 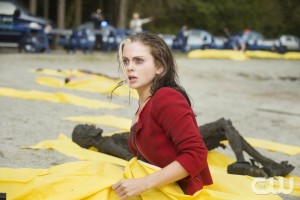 attacked and turned into a zombie at a boat party. She wakes up “dead” onshore, confused and with a powerful craving for brains.

To satisfy her cravings, she cleverly takes a job as medical examiner at the county morgue. With the cooperation of her boss and friend Dr. Ravi Chakrabarti (Rahul Kohli), she avails herself of the brains of murder victims, which she makes more enticing by blending them into increasingly elaborate dishes – a running gag on the show.

As long as she consumes brains on a regular basis, Liv retains her more-or-less human form, memories, personality, life. If she doesn’t get brains, she zombs out, which makes her super strong, violent, dangerous. A life-or-death emergency also seems to temporarily bring out the undead in her. 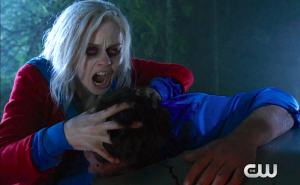 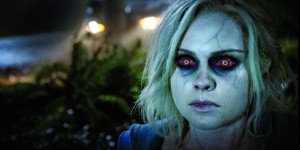 iZombie is a world of stealth zombies, as long as they can get the brains. This appears to be an outbreak rather than an epidemic, pandemic, or apocalypse, and the general public is completely unaware of its existence or the existence of individual zombies. The virus is spread by biting, scratching, exchange of bodily fluids, and is not lingering within everyone as in The Walking Dead.

A key element of the show’s mythology is that when Liv (or any other zombie) consumes a brain, she experiences memories of the dead person, a la Warm Bodies, especially intense memories close to the time of death. The onset of these revelations is indicated by an image of neurons firing and some fuzziness around the memory/vision. In addition, Liv goes through her various trials and tribulations through the filter of the murder victim’s personality: she becomes the victim, to a certain extent, while her body processes the brain. Technically she’s dead, but no one would know apart from her peculiar eating habits, white blond hair, a lingering paleness, and a subtle darkness around her eyes.

Tracing Liv’s ongoing transformation away from even those subtle zombie cues is a fascinating sidelight to the show. Look how lovely and fully human she looks in the image at the top of the page, and below from the season two’s “Real Dead Housewives of Seattle” episode. Liv is the Pretty Zombie. 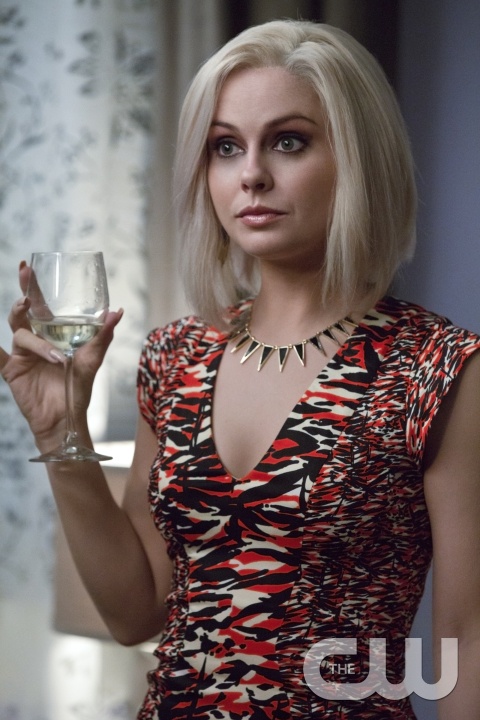 Continuing with iZombie‘s premise — and there’s a lot going on — because she’s a medical examiner in the morgue and in regular contact with the police department, because she eats the brains of murder victims, because she then experiences key memories of the victim, she is the perfect homicide detective! And that becomes her cause — her “One Thing” as she tells her partner in detection, Det. Clive Babineaux (Malcolm Goodwin) — that makes the complicated life of a clandestine zombie worth living. 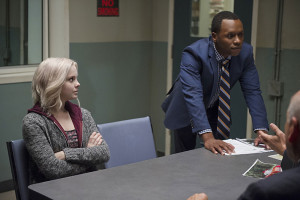 As mentioned, when Liv eats a brain, she “becomes” that person in personality and, often, wardrobe, for the time she is “on” (to use a drug analogy) that brain. Rose McIver is remarkable in her ability to convey the influence of these personalities — Real Housewife, frat bro, method actor, country singer, basketball coach, superhero wannabe, etc — from week to week. Here are some of those looks. 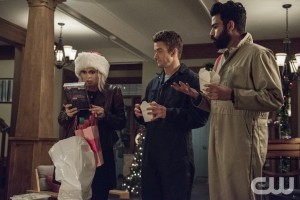 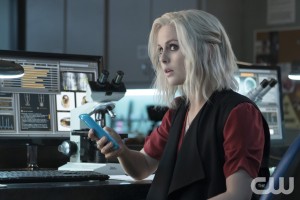 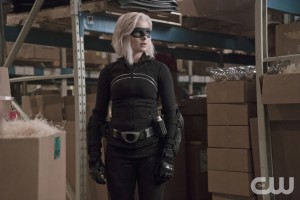 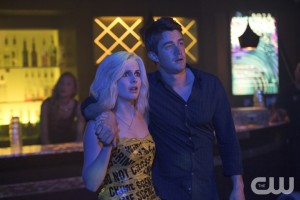 There are overarching story arcs about finding a cure, unscrupulous energy drink executives, the on-off-on-off relationship between Liv and her former fiance Major (Robert Buckley), the zombie who bit her (David Anders) and his brain-peddling organization, complications with friends and family, and on and on.  iZombie is a wild, unpredictable, engaging ride along with the world’s first Pretty Zombie.

Now take a look at the original logo of the show. Notice how the zombie features, including brain, are emphasized. 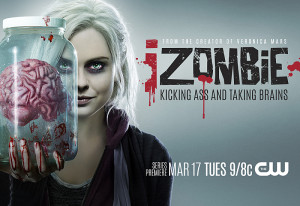 Now look at season two logo: still the dark eyes and blood on hand, but glammier look, no brain, and vampy smile. Besides episodic transformations, Liv is becoming an even more human Pretty Zombie over time. Who knows where she’ll end up. 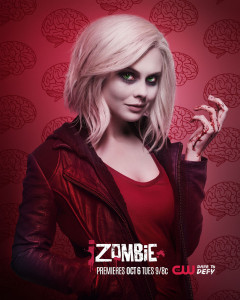 (all images courtesy The CW)