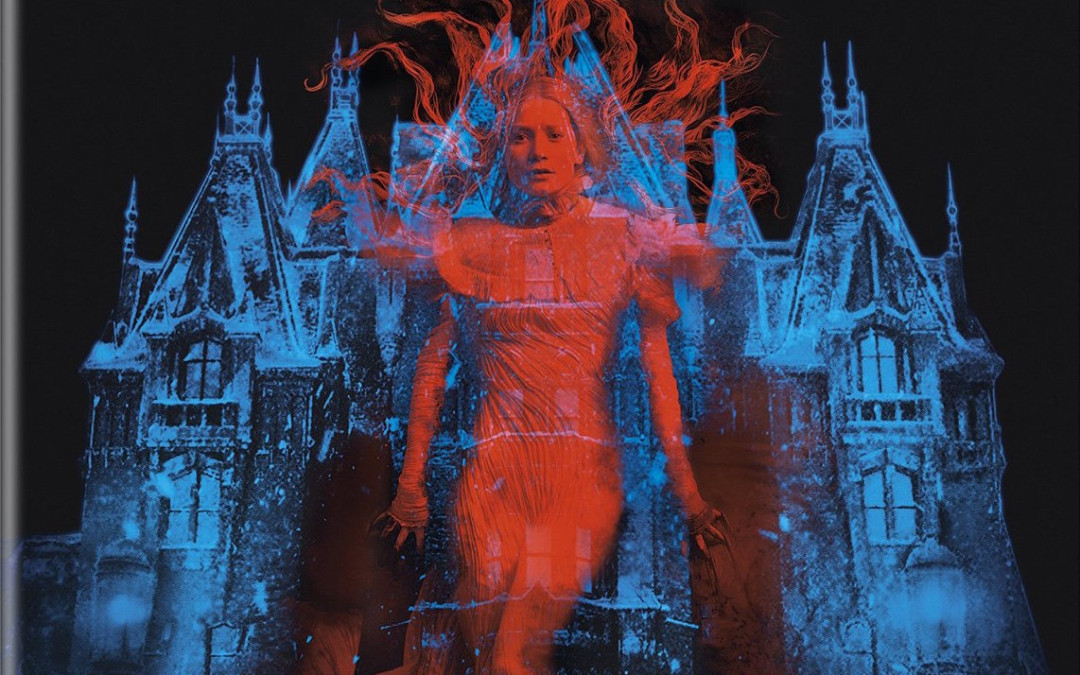 Not many directors can get away with style over substance these days. Unless your name is Guillermo del Toro. Granted, most of his screenplays are filled with as much depth as his production design, sometimes the design itself drives the film. And now, Crimson Peak — his latest visual triumph — is finally on home video for fans to embrace Allerdale Hall in all its HD splendor in a Blu-ray/DVD/Digital HD combo pack from Universal Home Entertainment.

Edith Cushing (Mia Wasikowska) believes that ghosts are real ever since her recently departed mother appeared to warn her, “Beware of Crimson Peak” as a child. All grown up now, she lives a privileged life with her father Carter (Jim Beaver) and has big dreams of one day becoming a published author. She likes writing stories that have ghosts in them, but publishers are looking for mere ghost stories. 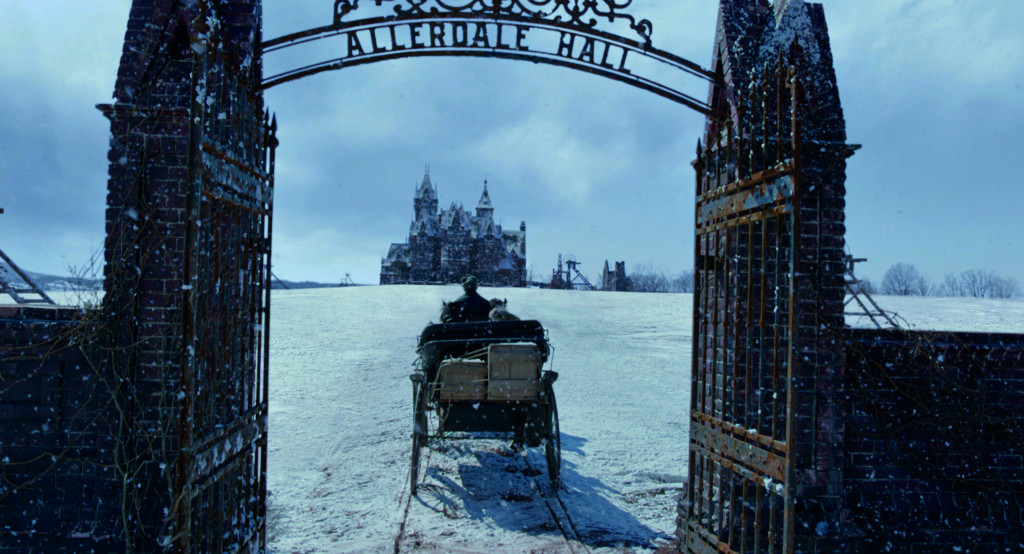 After Edith meets Thomas Sharpe (Tom Hiddleston), he whisks her away to England after the tragic death of her father, to live at the decrepit Allerdale Hall with Tom and his too-close-for-comfort sister Lucille (Jessica Chastain). It won’t be long before the terrifying truth of Crimson Peak comes calling, with Edith caught in a game of cat-and-mouse between the living and the dead.

Universal delivers Crimson Peak on Blu-ray with a jaw-dropping transfer. Even with a multitude of special features, the 50GB disc gives the film plenty of life in its original 1.85:1 aspect ratio. Colors are spectacularly bold with blacks inky with just a touch of intentional crush. Del Toro knows what he’s doing with his visual flair on full display. Detail is exceptional while banding and aliasing are nowhere to be found. 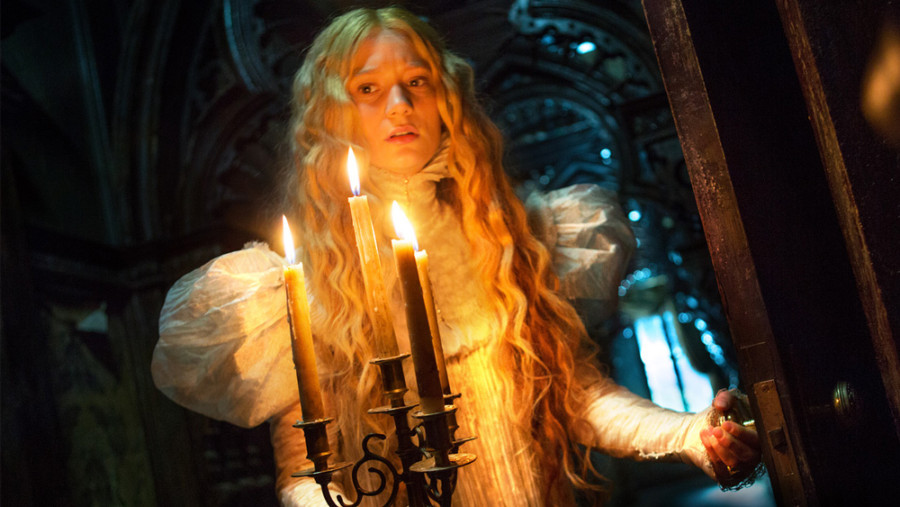 The 7.1 DTS:X track is also an auditory feat. Music and special effects pan from one speaker to the next while dialogue is never drowned out, with prioritization in full effect. Bass keeps the goosebumps rising throughout. Additional audio tracks include DTS Headphone:X 2.0, DVS Dolby Digital, along with Spanish and French 5.1 DTS Surround. Subtitles are available in English, Spanish, and French.

As with all Del Toro pictures, there is a wealth of special features included. While not quite as in depth as his Criterion releases, at least they weren’t skimped over. An audio commentary is included with Del Toro offering way more technical information than most directors. His usual anecdotes are included, along with the expected foul language. Listening to his commentaries is always a treat — and here is no different. The man is one of the most scholared filmmakers working today; do not hesitate to listen.

A collection of “Deleted Scenes” all could have been cut right back in and probably add character moments that would resonate with the naysayers. “The Park” (1:00) offers an additional bit of footage with Charlie Hunnam’s Dr. Alan McMichael joining Edith, Thomas, and Lucille for a lunch in the park. “Thomas’ Presentation” (0:54) reveals that Carter was more impressed with it than in the final cut. “Father Consoles Daughter” (0:45) is blink and you’ll miss it with Carter trying to ease Thomas’s rejection. “Thomas Sees a Ghost” (0:49) is self explanatory, as is “Lucille at the Piano” (0:59). 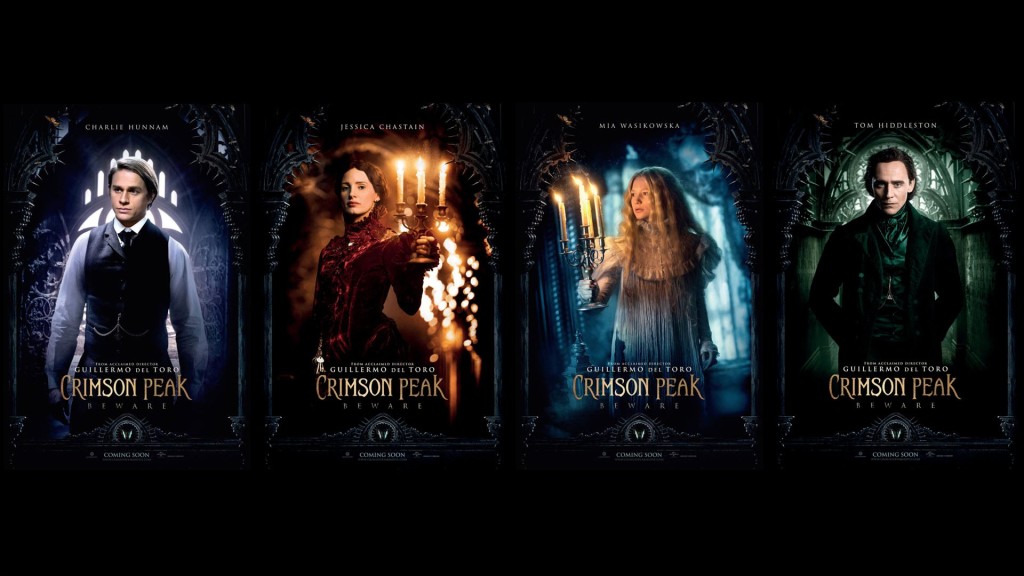 Seven featurettes cover everything you could have wanted to know about the making of Crimson Peak, offering glimpses behind the practical/visual effects to the set design. “I Remember Crimson Peak” (4:06) takes us down “The Gothic Corridor” which acts as a ghost generator for the story, there’s always something spooky waiting for us at the end. “A Primer on Gothic Romance” (5:36) gives Del Toro the chance to explain that the film stems more from a literary aspect and separates itself from gothic horror with romance vs. ghosts and Edith’s dark right of passage.

“The Light & Dark of Crimson Peak” (7:53) is a visual breakdown of Buffalo, New York, versus Allerdale Hall in England through the use of blacks, cyan, amber, and of course, red. “Hand Tailored Gothic” (8:58) gives the costume designs their due, including the names of Edith’s dresses and how Lucille’s clothes mirror the house. “A Living Thing” (12:11) gives a peek at the original model used to set up shots along with how long it took to build: October 2013 to February 2014.

“Beware of Crimson Peak” (7:51) is an up close and personal tour of the set with Hiddleston as our guide. We also get to see Wasikowska performing her own stunt when Lucille pushes Edith over a bannister. And finally, “Crimson Phantoms” (7:02) is a look at the spectral creations and how they used Doug Jones and Hiddleston in full costumes to create the ultra-realistic ghosts that haunt the house.

Crimson Peak was a misunderstood release. Just because it was released for Halloween and features Del Toro’s name on it, doesn’t automatically mean it’s going to be the scariest film of the year — even if the trailers were. It never mislead audiences; I think they just went in with the wrong expectations. As it stands, Crimson Peak is a fantastic fairytale for adults about a young woman trying to find her place in the world, facing danger where she leasts expects it. The cast is amazing even if the house manages to steal the show. Featuring exemplary visual/audio, with a wealth of special features, hopefully Crimson Peak can find the fans it deserves on home video in a Blu-ray package worth a blind buy for those who didn’t catch it in theaters.