AMC’s PREACHER Pilot Debuts at SXSW Creatures from space, heaven, hell, and places yet to be determined. 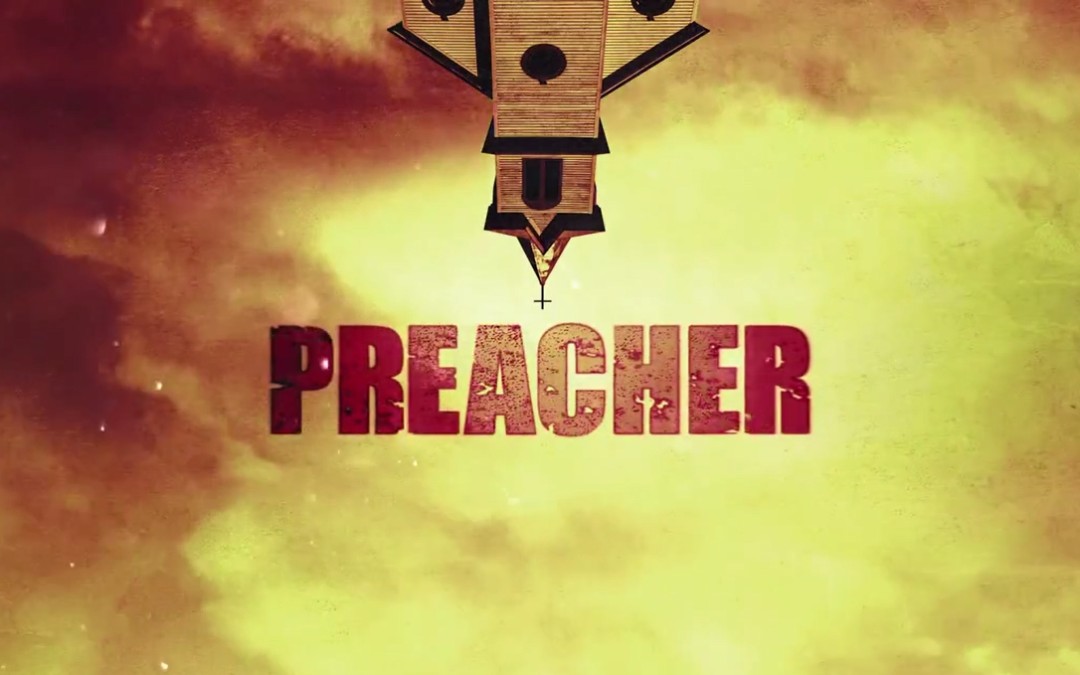 Not being a comic book nerd, I was taken by surprise to learn that the SXSW world premiere of Preacher was based on a comic book. The fans in line at Austin’s Paramount Theater filled me in as we waited for the showing of the pilot for this new AMC episodic. I was about to enter a world of creatures from space, heaven, hell, and places yet to be determined.

Preacher is a Seth Rogen and Evan Goldberg project. They previously worked together on Pineapple Express, This Is The End, and The Interview. This time they have teamed with showrunner Sam Catlin of Breaking Bad.

The story, its cast, and its development provided more surprises. 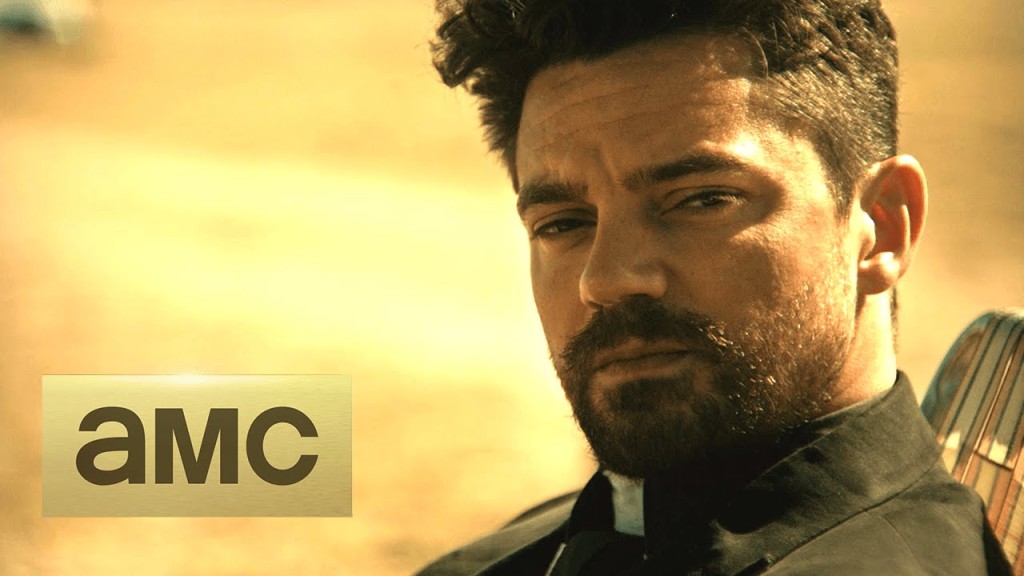 Based on the comic created by Garth Ennis and artist Steve Dillon with covers by Glenn Fabry, the story starts in space and then visits Africa, Russia, and Texas. Along the way, people explode. Its focus is on Jesse Custer, played by Dominic Cooper (Agent Carter, Captain America: The First Avenger). Custer, the bad boy son of a West Texas preacher, returns to his hometown to become its preacher and to keep a promise to his father. His past and a variety of bad things, including a mysterious cosmic force, an ex-girlfriend, and a psychopathic vampire complicate this for him.

Judging from the pilot, this series has great potential. As surreal as the circumstances are, Custer, his ex, Tulip, played by Ruth Negga (Agents of S.H.I.E.L.D., World War Z) and several supporting characters have engaging emotional conflicts and make progress during the story. I’m not yet sure about the vampire, played by Joseph Gilgun. He just may remain nasty.

Violence, lots of it, plays a large part in the story. It’s the first time in a movie that I’ve seen a character inflict a compound fracture.

After the movie, the cast and crew took questions from the audience.

Cooper, who is British, was asked if it was hard to do a West Texas accent. “I watched every Saturday Night Lights. They kept telling me to be more like Coach Taylor.” Cooper paused and looked around at the audience of mostly Texans. “In front of this crowd,” he said, “I’m so embarrassed.” His accent sounded good to me, but I’m from California. 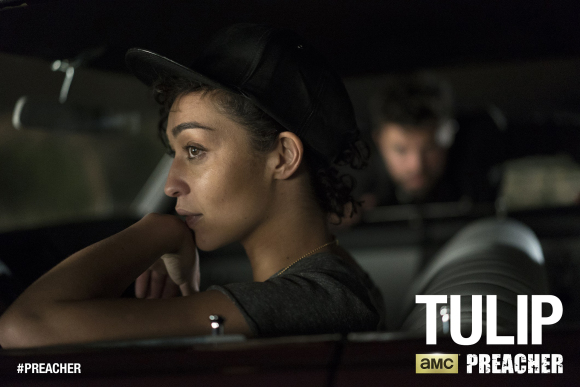 Negga whose character is a killing machine who is nice to children was asked if she added the sweetness or it was in the script. She said that it just seemed natural to her, and added, “I like this role because people seem to think that only boys are capable of extreme violence.” Let’s hear it for the girls!

Gilgun was asked if he enjoyed playing the Irish vagabond vampire named Cassidy. “Who wouldn’t,” he said. ”I get paid for wandering around and being a jerk all day.” He seemed really into it.

Rogen and Goldberg, childhood friends, have been working on this project for a long time.

“We had the first meeting about doing this when we were making Superbad.,” Rogen said. That would have been about ten years ago. “We thought about making it a mini-series, or a trilogy, but when cable TV became so awesome in last few years, that’s when we decided on a series. “ 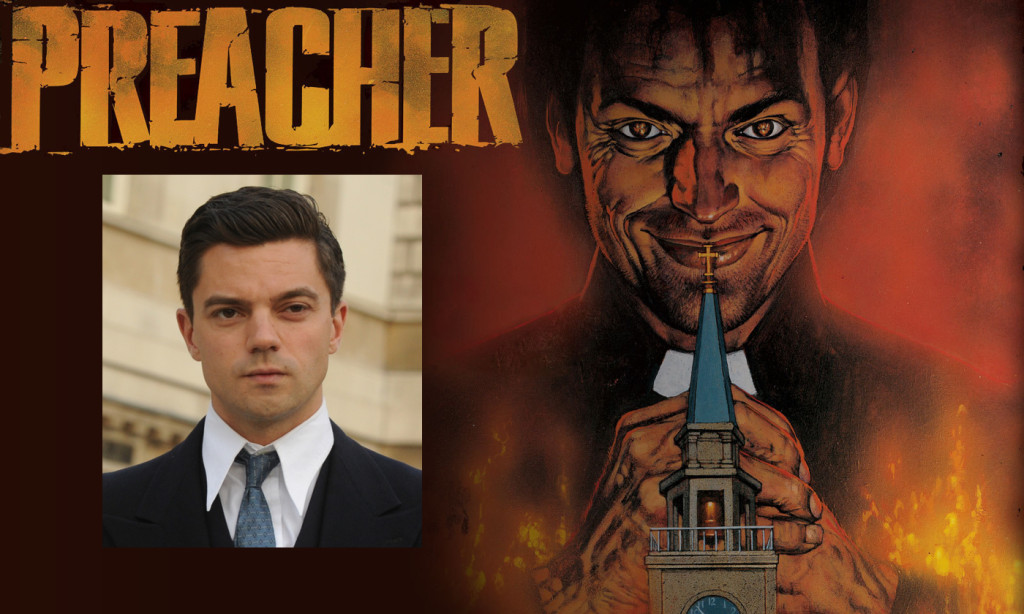 Fans in the audience were concerned that the TV show would stray from the comic book they loved.

Rogen tried to reassure them. “There are things we are changing from the comic book, but the least change is to the characters,” he said. “We did start the story in a different place than in the comic book, so people who weren’t fans would understand, but by the second season you’ll see all your favorite characters.”

Rogen expressed optimism that the show would succeed. He was happy with his cast and about showrunner Sam Catlin. He observed: “Sam from Breaking Bad has a big old brain.”

Preacher will debut this year on AMC. The trailer can be viewed below.