Old South Pittsburg Hospital – When a Ghost Follows You Home After an intense paranormal encounter, Gretchen Upshaw thought she had left the spirits behind 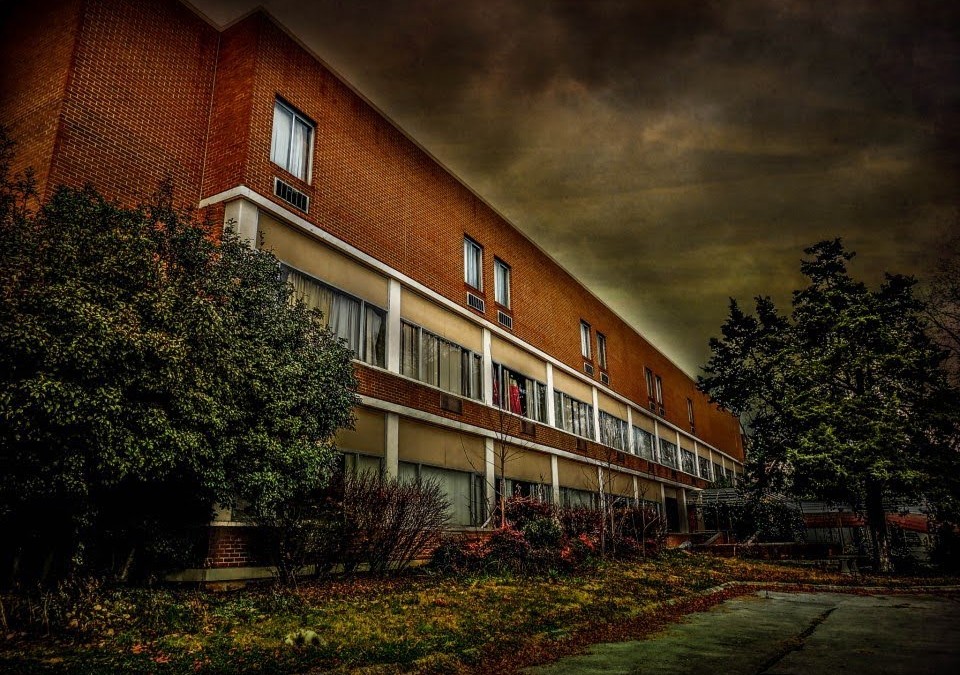 Some say strange things come in threes. I’ve been counting, and I’m well past three. Once I realized that there was no rhyme or reason to my paranormal experiences, I comforted myself with the knowledge that every unique “thing” is an honor. Although perhaps “honor” is stretching it a bit, as this experience that began at Old South Pittsburg Hospital will attest.

I spent Halloween weekend in a small town in Tennessee, leading a ghost hunt at Old South Pittsburg Hospital (OSPH). I work as the General Manager for Ghost City Tours, and we were hosting a paranormal investigation in the former medical facility. OSPH is considered by many to be one of the most haunted abandoned locations in America. It’s impossible to go there and not experience something. And, for many, those “somethings” follow you home.

At OSPH, I experienced all the typical ghost reality show encounters. Only it didn’t take an entire episodic season; my experiences started within the first few minutes of arriving and didn’t stop.

While there, I was physically touched; spoken to by disembodied voices; watched shadow figures move through the darkness; listened to furniture move (while staring at it in its stationary spot); answered phantom door knocks; heard the replicated and mocked sounds of equipment; and watched my partner go into a trance-like state.

As strange as the activity was, the aftermath of what I had the “honor” of experiencing was much more disturbing when I returned home to New Orleans. 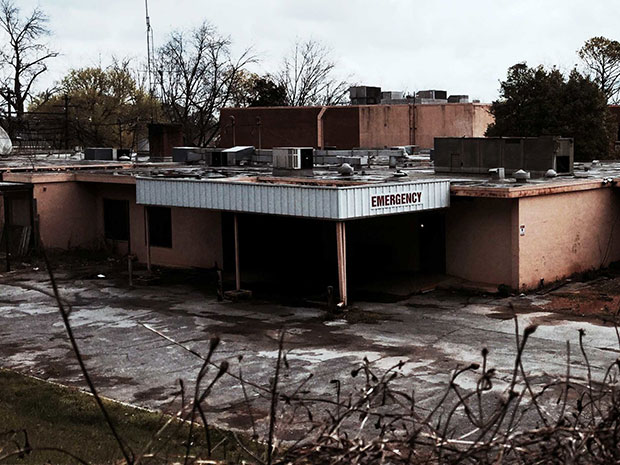 A Man from Tennessee

I live in a house with paranormal activity, and in early February, during Mardi Gras season, that activity had no boundaries. It crossed every line imaginable, making itself present in all areas of my life: waking and dreaming.

The night of February 3, I had a disturbing dream. It was so vivid and clear, filled with visual and audial detail, that I woke up with an overwhelming feeling of helplessness and total confusion.

In the dream, I was walking through a wooded area when I saw a lean-to on my left and a dirt mound on my right, the kind used for dirt bikes or motocross. As I rounded the dirt mound, I saw a young man in motocross boots and leathers on the ground. His body was bent and distorted and his head was swelling rapidly, becoming huge and bulbous. Gasping, I immediately approached him. I could see him breathing and that his eyes were open. As I entered his periphery, he gave me a huge smile. Even in his misshapen state, his smile was warm and sincere, his eyes were a bright greenish-blue, and he seemed in good spirits.

I moved closer and asked, “Hey, how are you?” My instinct told me to get him talking, to try and keep him calm. He was dying, but if I could just spend some time engaging him, maybe he would go peacefully. He replied, speaking slowly through his smile and with a thick accent, “Hey. It’s cool. I’ll be alright.”

How old are you?

He gave me another one of his charming Cheshire Cat grins.

Where are you from?

Aw. My accent. I’m from a small town in Tennessee. I’ve done some bad stuff. I’ve hurt the people that I love and who love me. I’m afraid to go back.

I’m sure you’ve been forgiven. And I’m sure that you are terribly missed. You’re welcome to stay here, but I bet you would be welcomed home, too.

His head was still swelling. His golden hair was falling out of his skull, leaving long, stringy patches on a huge onion-shaped head. His eyes were still bright, but beginning to bulge. He never stopped smiling. I looked at his fractured body, and I smiled back at him. I felt the need to comfort and nurture him. I watched his grin widen, his eyes brighten as he took his final breath.

I awoke with tears in my eyes and a sinking feeling. Grief and confusion swamped my emotions, mingling with helplessness and despair. After a few minutes of gathering my thoughts, I told my partner about my dream. I found myself searching for words to explain to him how real it was and how worried and weepy it made me feel.

The young man from Tennessee’s face was clear as a bell to me. If I had an ounce of artistic talent, I could paint his portrait directly from my dream memory. Who was he? 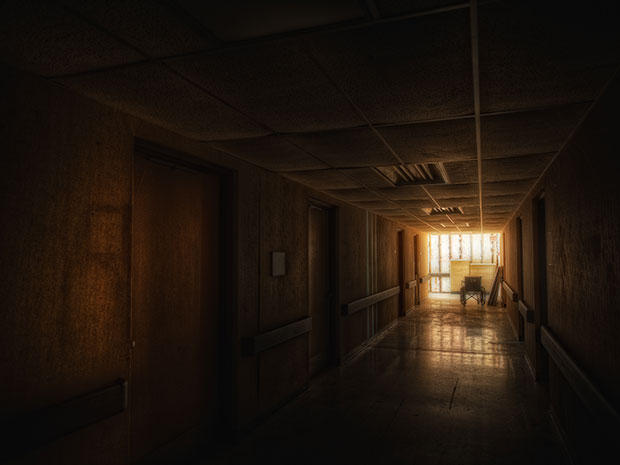 I Call Him Simon

When I got to work the next morning, I tried to push the images from my dream out of my head. After about an hour, my partner sent me an attachment about a young man who had died in a motocross accident in South Pittsburg, Tennessee. I opened it and gasped.

There he was. It was his face. It was his golden hair. It was his smile. Sudden sobs wracked my body, leaving me gasping at my desk. Why had he come to me in my dream? Was this the work of that damn haunted hospital?

Out of respect, I will call the young man Simon. He was 19 years old. He had died in a motocross accident two weeks to the day after we left OSPH. Simon had been arrested for theft a few months prior to the accident, and after doing a bit of research, I discovered that he had a single mom who loved him dearly.

What Simon said in my dream was showing itself to be true in the waking life. But why me? And why now?

My visit to OSPH now seemed to be a part of a bigger intention. My experiences with the paranormal were changing, and I felt a push into the unknown during my everyday life. For days following the dream, I looked for signs or clues to explain why Simon had come to me – had somehow followed me from South Pittsburg to New Orleans.

On February 6, we decided to brave a few of the Mardi Gras parades. I was going to let Simon go and try to enjoy the quintessential New Orleans celebration.

I had my fill of the crowds less than an hour into the festivities. I dropped my partner off at his place and drove back to my house. As I pulled into the driveway, I had a vision of Simon again. Nothing in particular, it was just his face, his bright eyes and his smile that popped into my head. I excused it. It was a pretty traumatic experience, and I acknowledged that it wasn’t going to disappear from my brain anytime soon.

I opened the door to my house to be greeted by 200 pounds of canine (two dogs, not one morbidly obese one) and dropped my beads and provisions on the kitchen table. There was a thickness in the atmosphere, which I have felt when my house is most active. I braced myself and headed to my bedroom to change clothes.

It was unbelievable. What I saw was something that I never would have imagined ever seeing in my life. It was what you see in movies or read about in books. As I crossed the threshold of my bedroom, there was my 6-foot wide, 7-foot tall, 3-door armoire in the middle of my bedroom. The armoire that takes up an entire wall and holds half of my wardrobe had been moved about 4 feet out from the wall to the center of my room.

Gathering my courage, I walked through the house to explore if anything else was off. My house is small. That took about one minute. I went back into my bedroom and swallowed the bile that rose in my throat and began to take pictures. I needed to prove to myself it had happened.

Then it hit me. Simon. Was this him? Was this the sign I had been looking for to explain why he had come to me in my dreams? Or had some malevolent entity followed me home from Old South Pittsburg Hospital?

Moving something this big was a bold statement. It wasn’t a coffee cup or a kitchen chair; it was a huge piece of antique furniture. And not just any piece: It’s my favorite piece of furniture that I own. 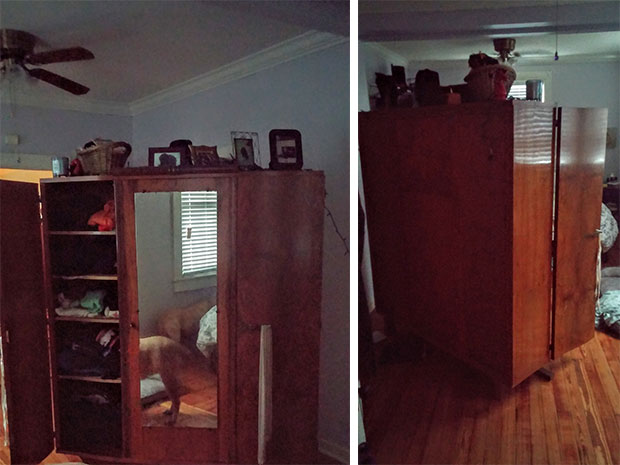 Eventually we moved the armoire back to its home, but I noticed that the ribbon that kept the first and middle doors closed had been undone and was hanging off the left door. I fixed it, and we went on about the evening, cooking dinner with minimal conversation and our ears pricked for anything out of the norm.

After dinner I slowly walked back into my bedroom only to stop dead in my tracks. The ribbon was now untied and hanging on the middle mirrored door. My heart raced. And that unexplainable feeling returned with a vengeance. Fear, anger, and confusion threatened to drown me. Was I going mad? I didn’t touch the ribbon this time; I left it alone.

After calling my partner into the room and pointing, speechless, with tears in my eyes, I went back into the living room and pretended to watch television and not talk about what had just happened. Instead, my mind raced back to Simon, Old South Pittsburg Hospital, and the dancing ribbon.

Reluctantly and eventually, we headed to bed. As I peered over a paperback novel at my armoire, I saw that the final move had been made: My ribbon was put back into its original place and tied in a bow. The game was over.

I was reminded, again, that we are never alone. Our space is always being shared.

6 HAUNTED ASYLUMS YOU CAN ACTUALLY VISIT