Can’t Get Enough Horror? SHUDDER May Be Movie Streaming Service For You Talking with Shudder's Colin Geddes and Sam Zimmerman 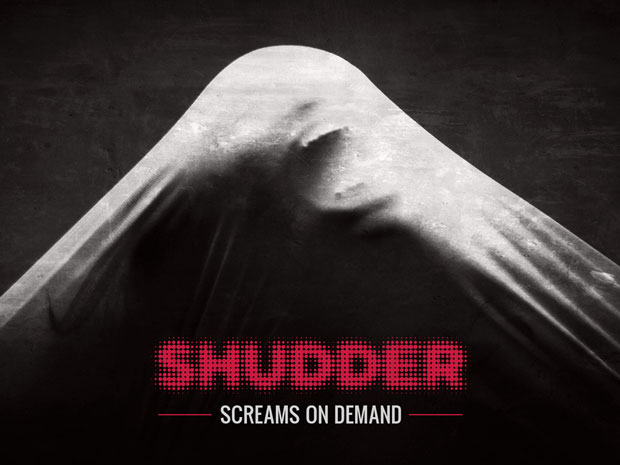 My first scary movie was The Sixth Sense. I remember it as a momentous occasion; horror movies were strictly off-limits as a child, and the trailers I saw in theaters as well as the spooky VHS boxes lining the walls of video stores had always intrigued me.

With M. Night Shyamalan, I experienced, for the first time, that unique thrill that horror fans know and love: the exhilaration of being scared. I loved the suspense, the terror, and the jump scares. I was hooked.

As I grew older, I started watching those scary movies that I longed to see. I devoured psychological thrillers like The Silence of The Lambs and Polanski’s Repulsion. I soaked up body horror flicks that turned my stomach and disturbed my sleep. David Cronenberg’s The Fly still terrifies me to the core, even though I’ve seen it many, many times.

Today, I know what I want when it comes to horror. But like all horror movie buffs, I love a good movie recommendation. That’s why I jumped when I heard about Shudder.

Shudder is a horror streaming service, with a growing collection of nearly 400 movies. Many of Shudder’s titles can’t be found anywhere else. Their site makes it easy to find your next freaky flick, from bloody Italian giallo films to ‘80s slasher movies and the latest twisted chiller. You can browse by title, filter by genre and movie monster type, or search through fun and creepy categories like “Romantic Bloodsuckers” and “Eco-Terror.”

I went straight for the “Body Horror” category. Excision, about a disturbed girl who dreams of becoming a surgeon, immediately caught my eye. From Excision, I found Grace, the story of a vegan mother who brings her baby back from the dead only to find out that her undead kiddo is definitely not a vegan. It was twisted, gross, and disturbing: just what I like. I now have a list 10-deep and growing of movies to watch.

I reached out to the folks at Shudder about trying the service, and they offered to give The Lineup readers a free, 30-day trial. Simply use promo code THELINEUP at checkout on SHUDDER.COM.

And while you wait for the sun to go down, get to know the minds behind the madness. I caught up with Shudder’s Colin Geddes and Sam Zimmerman to talk horror, terror, and what makes Shudder so unique.

What do you look for when you’re putting a horror movie up on the site?

Colin Geddes (CG): There are new films and old films. With the old films, there are classics, films that have stood the test of time, have cult followings, are critically recognized, have strong fan bases. So we pay attention to those. We don’t go for the “oh, it’s so bad it’s good” [films]. Horror films and horror cinema: there’s actually a real craft to it, to be able to balance horror, terror, and often humor. So we look for the films that have done that successfully.

When it comes to newer films, I’m looking for stuff that’s fresh, or taking a new spin on old, classic tropes. I mean right now, as a perfect example, zombie films have just been run into the ground. We’re waiting to see who’s going to turn it around, who’s going to give us a new spin to this, because if I see another zombie comedy or another zombie film … there’s got to be something fresh and unique about it … it’s got to scare me.

So that’s what we look for: stuff that’s fresh and [that] pops, but that’s also smart.

Sam Zimmerman (SZ): We have no room for mediocrity, you know? We don’t want films that just do the same thing, and do it blandly.

And when you consider some of the extreme films we have, like Cannibal Holocaust, there’s a million reasons why we shouldn’t have it … but it just exists in a really interesting cult space. It’s a notorious film, it’s a banned film… it lived with legal dispute for quite some time.

So we’re looking at (A.) Is the movie great? And (B.) What was its context in its release? Was it a notable film in horror history? We really consider quite a lot. We have a lot of fun. 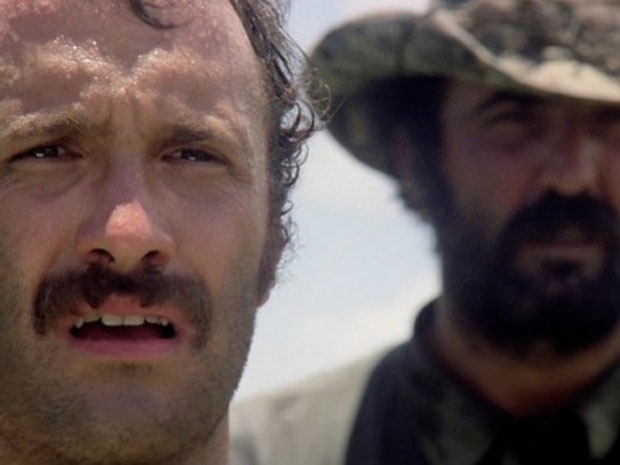 So what, exactly, makes a horror movie scary?

SZ: Oh man, that’s so subjective! That’s what I love about horror: It’s like, the widest genre in the world, because fear and anxiety is such a personal perspective. I mean, there’s a lot that we all share, like the dark, the unknown, the beyond, things we’re afraid we shouldn’t know—I think that’s why paranormal and ghost stories really get to us … but then there’s also your own particular fears.

CG: Sam excels in is guiding people to stuff that’s going to scare them … so for instance, let’s talk about you. What’s your religious background?

I was raised Jewish.

CG: Okay, so we can cut out a lot of Catholic guilt. Do you have any particular phobias?

The “going insane” phobia, is one that really resonates with me.

SZ: Obviously Demon is the movie for her.

Repulsion is actually one of my favorite movies! 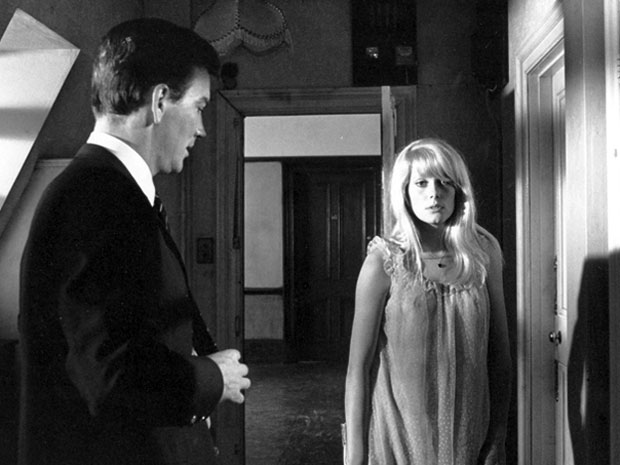 Still from Repulsion via Compton Films

CG: Well there you go! (Laughs) … So one of the interesting things with horror is the definition. Personally for me, I like stuff that is more phantasmagorical, unexplained. But in the realm that people consider horror, there is also terror. Now terror is more reality-based. Terror is about serial killers, home invasions, real stuff. And the outcome of that is always reality-based. However, horror is different, as there’s more of a lingering dread … it has no rules. And that stuff gets under my skin more than something like, say, Hostel.

What are your favorite hidden gems on Shudder?

SZ: We actually just put up a film called Alleluia, which is from the Belgian director Fabrice Du Welz, and it is incredible. It is one of the best movies in the last couple of years … it’s this spellbinding, vicious, dark love story. It’s just so, so good; I love it so much, and I hope people discover it on Shudder. 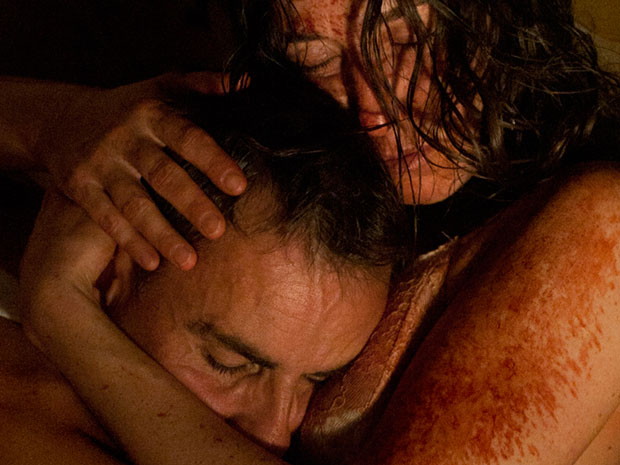 Still from Alleluia via Panique

CG: For me, one of the hidden gems is I Am a Ghost. It’s this great little indie film. It takes the whole concept [of the ghost story] and flips it on its side.

SZ: It’s a really empathetic movie, which I like a lot. You see this girl’s whole world crashing down around her. It’s really interesting and cool.

Has there even been a movie that you guys, even as huge horror fans, couldn’t watch because it was just too disturbing or too scary?

SZ: Not in the sense that I won’t sit down to watch it. There are movies I’ve watched and been like “okay, I never have to confront this again in my life, and I’ll be happy with that.”

SZ: Hm. You know, for a while, it was Cannibal Holocaust, until I re-saw it recently … but actually, The Last House on the Left did that to me as a kid. I saw that very young. I love Wes Craven, but I don’t think I was ready for … what he was doing with that film … it really upset me on a major level. 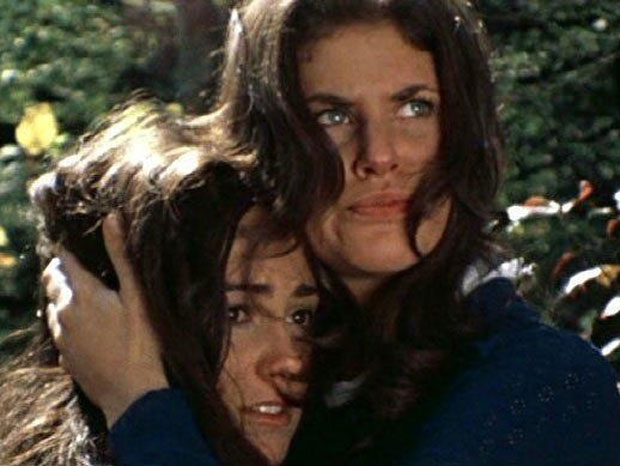 Still from The Last House on the Left via Lobster Enterprises

CG: I kind of agree with Sam about The Last House on the Left. I mean, I love Wes Craven but I don’t know if I want to have to endure that again. Same thing with Henry: Portrait of a Serial Killer. It’s a masterful film, but it is really stark and depressing. I saw it in theaters when it came out, but it’s not really an experience I’d like to go back and revisit … Funny Games by Michael Haneke is another one like that. It really, for lack of a better word, f*cked me up the first time I saw it.

Dying to try out Shudder for yourself? Sign up today on SHUDDER.COM, using our special promo code THELINEUP to get a free, 30-day trial. Your nightmares will never be the same.

15 Horror Movies for People Who Have Seen It All

10 Best Horror Directors That Will Give You Nightmares for Life