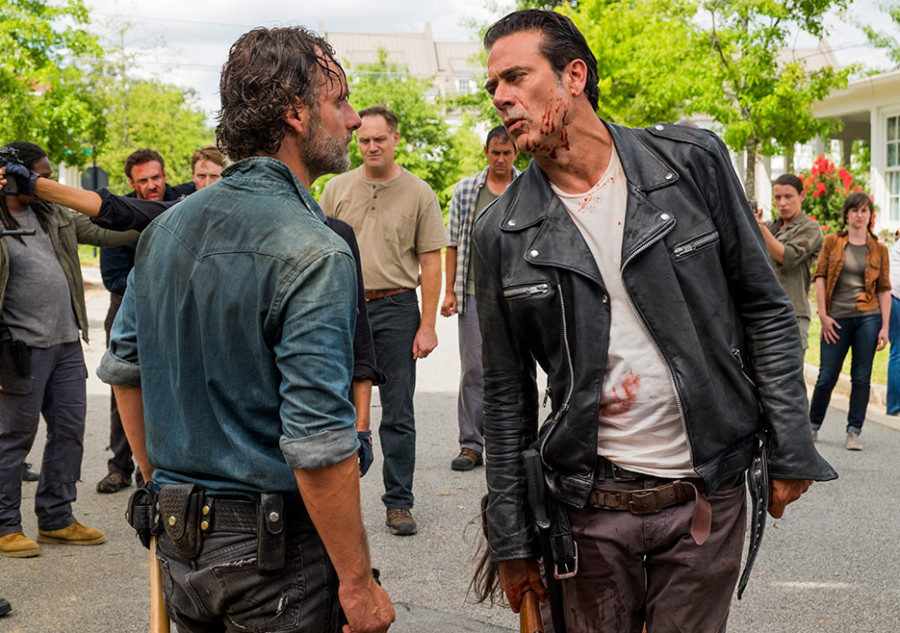 Since season seven’s premiere episode of The Walking Dead – the one in which we witness Negan (Jeffrey Dean Morgan) bash in the heads of two beloved characters, Glenn (Steven Yeun) and Abraham (Michael Cudlitz) – The Walking Dead has been in its own death spiral. For a series that I (and millions of others) have loved to watch, it has been a struggle each week to stay tuned (and ratings have plunged). I have been hoping that things will get better, but each week they get worse.

Now don’t get me wrong; I am still a fan – mostly because I am invested in Rick (the amazing Andrew Lincoln) and Carol (equally amazing Melissa McBride) and also terrific Daryl (Norman Reedus), Morgan (Lennie James), Michonne (Danai Gurira), and the rest. I want to see them move ahead and perhaps find some kind of peace and happiness.

But as a fan of Kiefer Sutherland in 24, I know that dark, tragic dramas like these rarely bring the characters there. His Jack Bauer has about three minutes of normalcy with his family in episode one/season one and then never experiences it again throughout the series. We don’t go to see Hamlet or Othello and expect the titular characters to be waltzing off into the sunset with Ophelia and Desdemona respectively, because tragedies never end that way.

The Walking Dead is in essence an extended TV tragedy, and if that is the case then following Rick since he woke up in the hospital in season one/episode one means that we are inevitably going to see what we don’t wish to see. With that said, the series creator and executive producer Robert Kirkman, the writers, and showrunner Scott Gimple have played around with us with abandon. They seem to believe that they have us hook, line, and sinker, and there is nothing that we can do about it. Alas, they don’t know how close I have been (and other people I know) to tuning out permanently.

So we have been treated to seven difficult to watch episodes leading up to this midseason finale. Being that it is The Walking Dead and we know that we will not see Rick and company again until February, we are usually left with a slam-bang episode that keeps us wanting more. This eighth episode almost gets us there, but just not quite all the way. 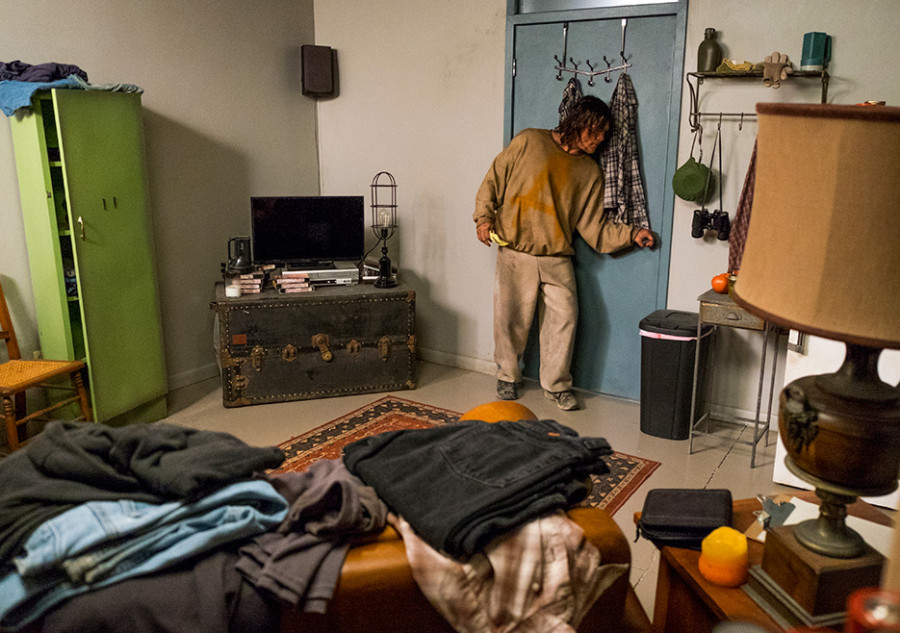 Maggie (Lauren Cohan) increases her chances for leadership at the Hilltop, Rick and Aaron (Ross Marquand ) get to swim in a lake full of walkers in order to gather supplies to please Negan; Michonne takes one of Negan’s women on a ride to the gates of the Sanctuary planning to kill him; Rosita (Christian Serratos in her best performance in the series) takes a shot at Negan with her one bullet; Morgan and Carol get a visit from one of the Kingdom’s soldiers asking to help lead an attack on Negan; and Daryl actually escapes from his jail cell. There is so much going on in this episode in an attempt to bring together all the season’s meandering stories, but while some of it is satisfying it also feels as if Gimple is trying to push too many threads through the eye of a needle.

The problem is that after spending eight episodes establishing just how bad Negan is and how everyone must fear him, I am longing for the Governor or even the Termites. Nothing against Morgan, who has done good work here, but the way the writers have gone about building him up has been more than irritating – did we have to have the threatening scene in the kitchen with Carl (Chandler Riggs), baby Judith, and doomed Olivia (Ann Mahoney)? By also simultaneously breaking Rick down to almost nothing, there has been no hope or anything to really keep us watching. 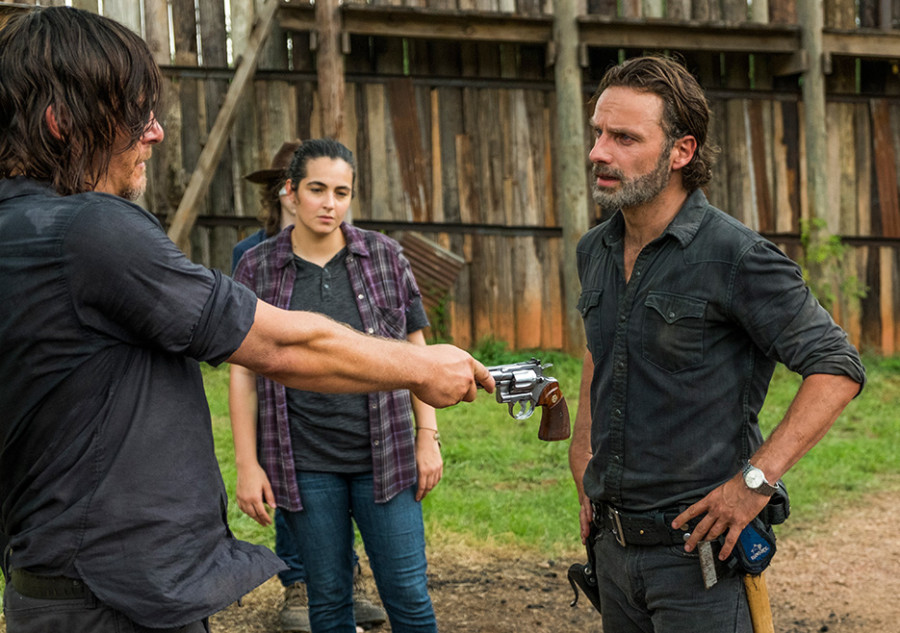 Toward the end of this episode we start getting glimmers of hope. Daryl escapes and reunites with Rick (and even gives him back the gun Negan had taken away from him). Everyone is smiling at the Hilltop, locking arms and hugging in a reunion of sorts, and there is a sense that now Rick has got his spine reinserted in his body and he will be able to get back to what Rick does best – kicking some ass.

If you have read the comics like I have you know what is coming – and I hate to break it to you – but there is a hell of a lot more of Negan in the forecast, and I am talking multiple seasons perhaps; however, I do not think the TV version of The Walking Dead can withstand that as it is written in the comics.

Now, of course, the TV The Walking Dead has certainly veered away from the source material many times. Characters who are still alive in the comics are dead on the series (like Andrea), and Daryl does not even exist in the comics, so there has to be hope that Gimple, Kirkman, and company realize the TV fans need something very different than the readers of the comics.

One thing is very clear after watching these eight episodes of season seven – Negan has to go. The way he is being portrayed may be keeping close to the source material (probably way too close actually), but the patience of the TV viewer is way shorter than the comic book readers. Negan has worn out his welcome, and we can only hope that Kirkman and Gimple realize this and give us a satisfying ending to season seven (unlike the terribly unsatisfying ending to season six).

So we already get that the Kingdom, the Hilltop, and the Alexandrians are all going to have to join forces to confront and defeat Negan. It will not be easy at first getting everyone on board in all the communities (and I fear a long, drawn out process), but from what these people are experiencing there is no other alternative and perhaps a quicker move to resolution will be found.

In this episode Rosita had the passion and spunk to try to kill Negan. After the bullet gets lodged in his barbed-wire covered baseball bat, affectionately called Lucille by the maniac, Negan asks her incredulously, “Did you just try to kill me?” This has to border on the most absurd rhetorical question because either Negan is living in a solipsistic world or all his cards are not in the deck. Yes, Negan, she tried to kill you – almost everyone hates you and wants to kill you, even your own people. 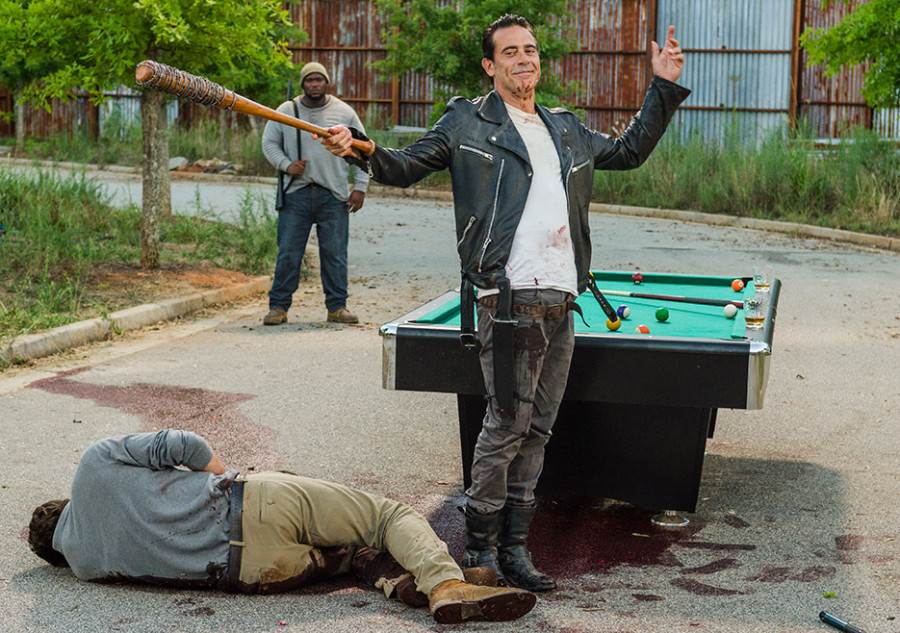 After a not so friendly outdoor game of billiards, Negan guts Spencer (Austin Nichols) for being a sniveling rat and turning on Rick, and then he has one of his people randomly shoot anyone, which turns out to be poor Olivia, who has endured ridicule and abuse from Negan and then gets a bullet in the head. These deaths, while rather inconsequential to the fans, are monumental in giving Rick a slap to the face worthy of Cher in Moonstruck – it is about time Rick snapped out of it!

It is difficult for any series to keep going as long as The Walking Dead has, and the fact that the cast has become so bloated makes it hard to give any of the tertiary characters meaningful arcs. If the impending conflict should do anything (besides remove Negan from the planet) it will probably wipe out many of these extraneous characters and bring us back to the core group that we care about most of all.

The real question is how long can Kirkman, Gimple, and company sustain the story line. Yes, there are copious amounts of comic pages to work with, but I wonder how much of it is truly translatable to the TV series. The more they take stories from the source material (including some verbatim dialogue) the less inclined many of us feel a need to keep watching.

I am cautiously optimistic that the rest of season seven may be much better than the first half. If Rick gets his act together and the others follow, maybe we can have a war that will eventually eradicate the Negan menace. I am not certain Kirkman and Gimple want to give up Negan all that quickly, but if they do not I don’t know if I (and many other viewers judging from what I have been hearing and reading) will be along for the ride. Season six ended with Negan bashing in the head of someone we cared about; here’s hoping that season seven ends with Rick keeping his promise to kill Negan, preferably with that hatchet.