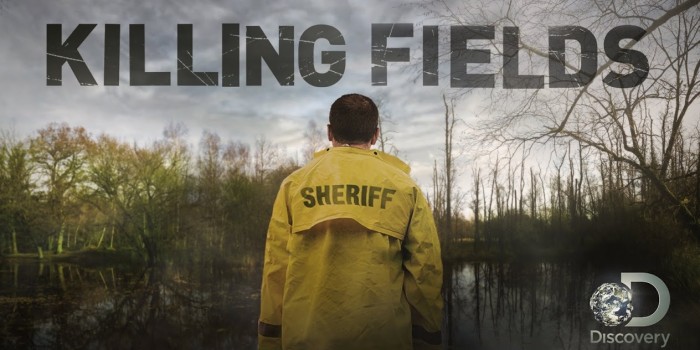 On a riveting episode of After Hours AM/The Criminal Code Radio — Wednesdays 9-11pE with hosts Joel Sturgis, Eric Olsen, and forensic psychologist Dr. Clarissa Cole — we enter the swampy world of cold case murders in Iberville, Louisiana, with Major Ronald “Ronnie” Hebert of Discovery Channel’s KILLING FIELDS. Major Hebert joins us in the 10pE hour – in the 9pE hour we review the week’s True Crime news and try to figure out why people are so mean to each other.

Shot in real time, the series picks up from last season as Rodie, Aubrey, and the team zero in on the killer of Eugenie Boisfontaine. Rodie is more determined than ever to close the case, which has haunted him for nearly two decades. But that isn’t the only case that catches their attention. The Iberville Parish Sheriff’s Office tracks another terrifying case after evidence surfaces in a nearby Parish of a body stuffed inside a barrel.

Rodie believes that this is tied to an unsolved disappearance he worked 26 years ago. Even more compelling – the facts surrounding the barrel are eerily similar to what the prime suspect once admitted in a separate investigation for that missing person’s case. But even with such information, Rodie could never lock him up because the body could not be found… Perhaps until now.

Together, with the guidance of Major Hebert, the team works tirelessly to secure crucial evidence, uncover grisly facts, and pursue new leads – all with one mission in mind: closing these cases and bringing justice to the victims’ families. With the advancement in forensic technology—along with good old-fashioned police work—the team gets closer to capturing the truth that leads them in a cat and mouse chase.  Will Rodie be able to keep good on his word to Eugenie’s mother that he would solve the case?

In charge of the Criminal Investigation Division at the Iberville Parish Sheriff’s Office, Major Ronald “Ronnie” Hebert serves as the bridge between the old guard and the new guard in the office. His skill at working departmental politics allows him to be the respected leader that he is. Known to have a silver tongue, Major Hebert prides himself on his interrogation skills and believes he is capable of obtaining a confession out of anyone. Major Hebert lives in the same area where he grew up, allowing him to develop strong connections throughout the Parish, which are beneficial for his team. He also tends to place his family first, often following his daughter’s traveling softball team.