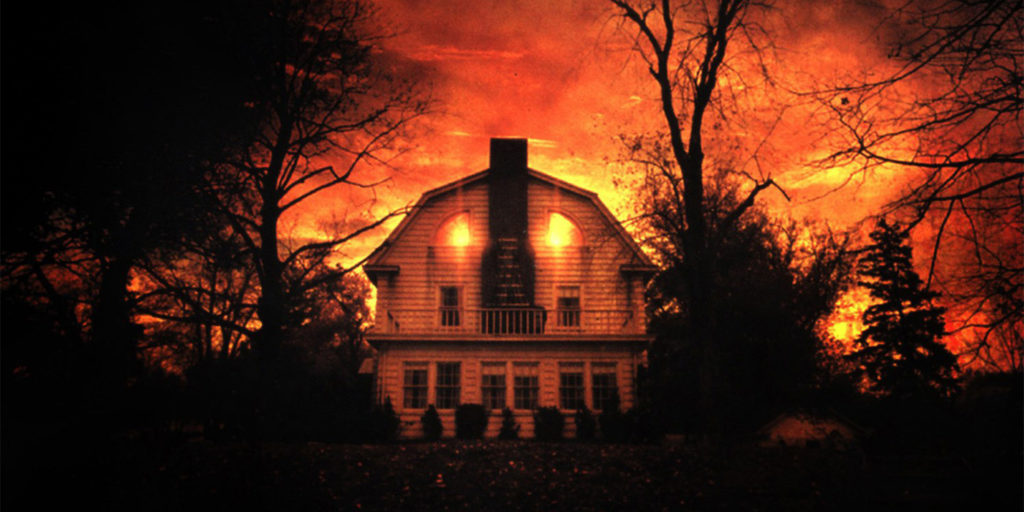 On a best-of-both-worlds edition of After Hours AM/The Criminal Code — True Crime Wednesdays 9-11pE with hosts Joel Sturgis, Eric Olsen, and secret weapon forensic psychologist Dr. Clarissa Cole —  we dive into two families viciously wiped out by murder, the Moores and DeFeos, and their allegedly wildly haunted afterlifes at the Villisca Ax Murder House and the Amityville Horror House. We talk these notorious murders and hauntings at 10pE; at 9pE, Joel and Eric review the week’s oddest True Crime news and chase off dark thoughts. 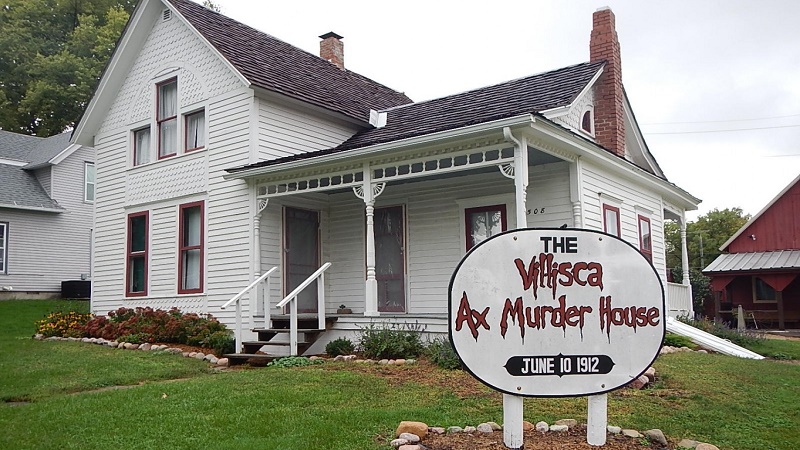 By the turn of the 20th century, small towns lined the railroads that traversed America. Villisca, Iowa was one of these places, the epitome of “small town America”: safe, friendly, and community oriented – a good place to raise a family.

On the evening of June 9, 1912, the Moore family — Josiah (43), Sarah (39), Herman (11), Katherine (10), Boyd (8), Paul (5) — and overnight guests Lena Stillinger (11) and her sister Ina (8) attended a highly anticipated children’s program at the local Presbyterian church. The program ended late, after 9:30 pm. The town of Villisca was dark. There was no moonlight, and a dispute between the municipal power company and city officials had resulted in the streetlights being turned off.

The Stillinger girls, afraid to walk alone through the darkened streets, telephoned home seeking permission to stay with the Moores. The family and their young guests made their way home and settled into bed sometime around 10 pm. When the sun came up Monday morning, a neighbor doing her wash noticed how unusually still the Moore house was. By the time the clock struck 7 am, curiosity turned to concern and she telephoned Ross Moore, Josiah’s brother.

Ross telephoned the house. Getting no answer, he called his brother’s store to find he had not yet arrived at work. Growing more concerned by the minute, Ross made haste to the Moore house. Along with the neighbor, Ross circled the house, calling out to his brother’s family, looking for any signs of life.

At 8:30 Ross pulled out his keys and opened the locked door. Once inside he made his way through the kitchen and parlor toward the downstairs bedroom. Almost immediately, he was confronted by the horrific sight of two bloody and lifeless figures lying in the small single bed in the downstairs sewing room.

Ross stopped and immediately called Villisca marshal Hank Horton, who arrived promptly to investigate. Once inside, Horton methodically went through the tiny house of horrors.

“There’s someone murdered in every bed!” he exclaimed in disbelief. 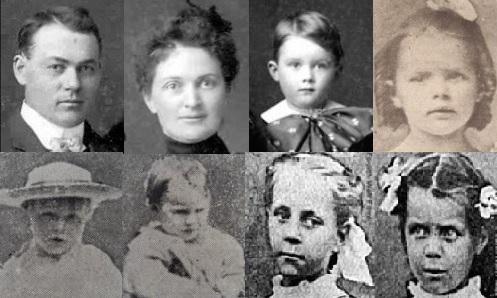 The only clue as to what had befallen the eight victims was a bloody ax placed against the wall of the sewing room. Each victim had been bludgeoned with the blunt end of the ax until no face was recognizable. It was later discovered that at least one of the Moores had been struck with the sharp end as well. The bloodied faces of each victim, and, oddly, every mirror and window in the home, had been covered with items of clothing or blankets.

Word spread like wildfire through the close-knit community, and soon the house was overrun with police, neighbors, townsfolk, and curiosity seekers. Any hope of securing the crime scene was lost and vital potential evidence destroyed in the frenzy of activity.

An outraged and fearful public cried out for justice and a culprit. Authorities sent out posses and bloodhounds, looking for any “stranger” who might have committed such a monstrous crime. When no viable “outsider” suspect was found, it appeared the killer was one of Villisca’s own. Accusations flew like daggers, and a frenzied terror overtook the community. As potential suspects came and went, authorities narrowed the list of suspects down to three.

At the top of the short list was F.F. Jones, a wealthy politician, banker, and business rival of Josiah Moore. Josiah had worked for Jones in his farm implement business, but had quit to start his own venture, taking the lucrative John Deere franchise with him. Local rumors of an affair between Jones’s daughter-in-law Dona and Josiah Moore were rife at the time, further adding to speculation of Jones’s involvement.

The prevailing theory was Jones had orchestrated the hit on Moore. A patsy named William “Blackie” Mansfield was targeted as the man hired by Jones to kill the Moores.

F.F Jones and William Mansfield were indicted for the murders in 1916 but the case was quickly dismissed.

The victims’ families and half the town were convinced Jones had hired Mansfield to kill Josiah Moore and remained steadfast in their quest for justice. A private detective named James Wilkerson led the charge against Jones, determined to close the case once and for all. Jones retaliated by suing Wilkerson for slander. Wilkerson’s attorney argued the slander case was not valid because his accusations were all true! They went to trial and instead of Wilkerson relenting, he turned the tide on his accuser, essentially trying Jones, now a state senator, again for murder. Neither charge made it past the grand jury.

The people of Villisca and the Moore and Stillinger families were devastated, it seemed the eight slain victims would never be avenged. But in 1917 another offering was made to the gods of justice in the form of Reverend Lyn George J. Kelly. Kelly, a visiting Presbyterian minister, had arrived in Villisca just days before the murders. Almost immediately, his odd behavior had raised eyebrows. 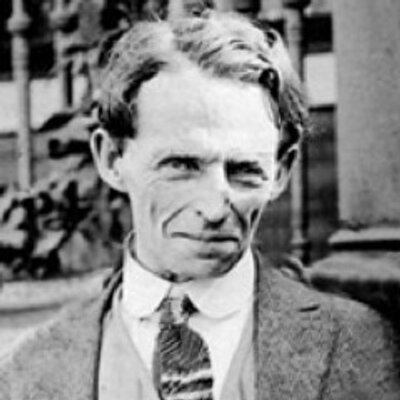 Kelly was a waif of a man, about 5’2”, 119 pounds, schizophrenic, and a possible pedophile who had been arrested for sending obscene materials through the mail. He spent the better part of a year in a mental hospital in 1914. His proclivity for young girls and a witness’s statement that he had known details of the Villisca crime before the bodies had been discovered, led to a criminal investigation in 1917.

Kelly was an outsider, an Englishman, not of the Villisca community. While in custody, he supposedly confessed to the murders three times, each version being slightly different. It is likely these confessions were coerced or beaten out of him, yet vivid details painted a horrific picture, leading many to believe he was somehow involved in the massacre.

According to his confession, the night of the murders, Kelly hadn’t been able to sleep so he had gone for a walk. While walking he heard God’s voice speaking to him, telling him to go forth and “slay utterly.” A dark shadow appeared, leading him to the Moore’s house where God spoke to him again, “Suffer the little children to come unto me.” Kelly said he was in a trance-like state following the directions of the Lord, who led him to the ax by the shed. He picked it up as ordered, went inside and killed Josiah and Sarah. The voice told him to do the same to the four sleeping children in the next room. After, the voice said, “There’s still more to be done,” and he descended the stairs into the sewing room and quickly killed Ina and Lena Stillinger.

Vivid confession notwithstanding, most doubted Kelly had actually committed the murders, stating the obvious fact that he lacked the physical attributes to do such a thing. The first of two trials ended in a hung jury, eleven-to-one for acquittal. The second trial led to an acquittal. Most believed Kelly was deeply mentally disturbed, but doubted he actually committed the crimes.

No one else was ever tried for the murders.

The massacre faded into the memory of the town like the bloodstained walls in the Moore house, whitewashed again and again in an attempt to cover the past. The house remained vacant for a number of years before a series of families passed through. Occasionally an occupant reported something strange, but for the most part the house remained quiet, paranormally speaking.

In 1993, Darwin Linn bought the property with the aim of restoring it, choosing not to forget the horrors of 1912. Linn turned the home into a living museum, opening it up to the outside world for the first time in nearly 100 years. Soon visitors reported strange experiences. It was evident the notorious Villisca Ax Murder House was haunted.

Several television programs have filmed episodes there, including Scariest Places on Earth, Ghost Adventures, and My Ghost Story, as well as an award winning documentary, Villisca: Living with a Mystery by Kelly and Tammy Rundle, featuring commentary by Dr. Ed Epperly, a.k.a. “The Ax Man.” Epperly, THE expert on the Villisca murders and the history surrounding the case, admits that after decades of research he is still baffled by the events.

Reports of startling, sometimes terrifying experiences continue to pour out of the modest house. Dark ominous shadows, unusual cold spots, disembodied voices, a young girl’s muffled cries, children’s laughter, unseen hands rolling a ball, and doors that open and close by themselves are a few of the supernatural claims. Heartbreakingly, spirits of the murdered children seem to linger shyly in the shadows.

The reputation of the crudely but appropriately named “Villisca Ax Murder House” grows with each visit, each inquiry into its painful past. The death of eight innocents live on in the memories of the thousands of souls who make the pilgrimage to Iowa to pay their respects and commune with the spirits of the most haunted house in the United States.

November 13, 1974. Patrons of Amityville sat around drinking at Henry’s Bar, just blocks from 112 Ocean Avenue. At 6:30 p.m., Ronald “Butch” DeFeo, Jr. swung open the door of the bar and shouted: “Please! You’ve got to help me! I think my mother and father are shot!” The young man falls to his knees and begins weeping, surrounded by his startled friends.

Butch’s best friend, Robert “Bobby” Kelske, along with Joey Yeswit, John Altieri, Al Saxton and William Scordmaglia raced back to 112 Ocean Avenue driving Butch’s 1970 Buick Electra 225. Upon arriving, the men found the front door unlocked. Inside, the house was dark and still. Shaggy, the DeFeo family’s sheepdog, began barking as the men entered. The dog was tied up to the inside of the kitchen’s back door.

Bobby Kelske led the group of men up the staircase and to the master bedroom on the left. Switching on the light, the men were met with a horrifying scene. The lifeless bodies of Ronald DeFeo Sr., 43, and his wife Louise DeFeo, 42, lay sprawled out on their bed. A bullet hole and a dried stream of blood were visible on Ronald’s back. Louise’s body was buried beneath a blanket…. 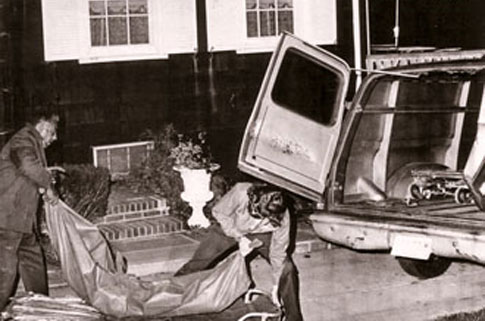 Thirty miles outside of New York City, nestled in the Long Island town of Amityville, stands the house forever linked to the Amityville Horror phenomenon. On November 13, 1974 the estate was the scene of a mass murder. Using a .35 Marlin rifle, 23-year-old Ronald J. DeFeo Jr. murdered his entire family while they were asleep, which included his parents and four siblings.

Thirteen months later, the Lutz Family purchased the 5-bedroom, 3.5 bathroom home at a drastically reduced price of $80,000 (due to the murders) but only lasted 28 days before leaving it. Their spine-tingling tales of paranormal activity is what propelled the legend of the Amityville Horror, “America’s most haunted house,” and spawned a torrent of books, documentaries, and films — the latest being the horror/thriller Amityville: The Awakening, starring Bella Thorne and Jennifer Jason Leigh, which opened last summer 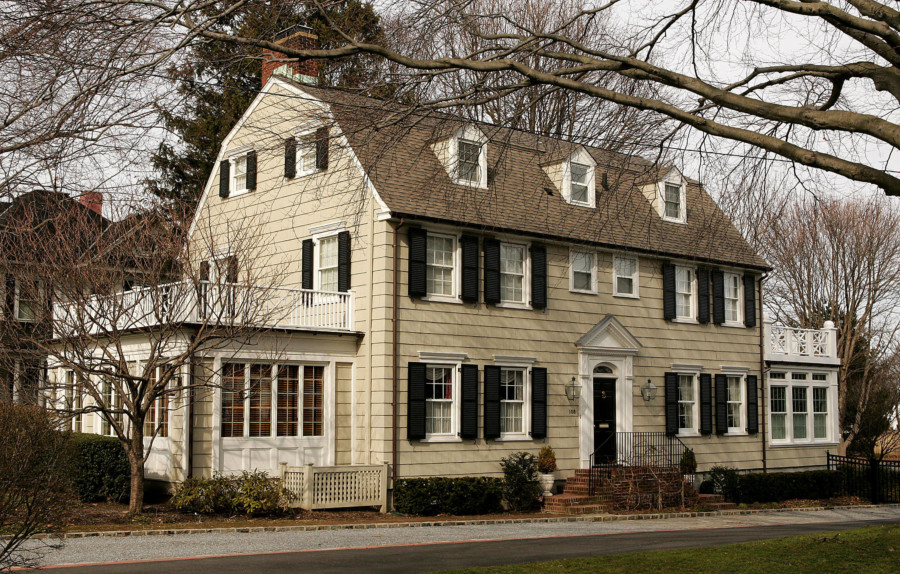 The Amityville House officially sold on February 2017 to an undisclosed owner for $605,000, which was $200,000 less than the original asking price. It had been previously owned by four other families since the murders, one of which had the address changed to 108 Ocean Ave. (The house originally stood at 112 Ocean Ave.