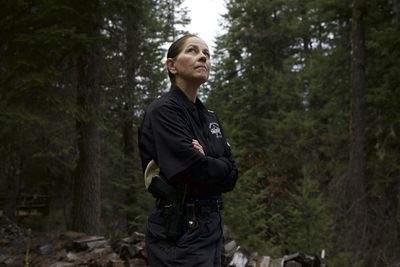 On an intensely dramatic and timely episode of After Hours AM/The Criminal Code — True Crime Wednesdays 9-11pE with hosts Joel Sturgis, Eric Olsen, and secret weapon, forensic psychologist Dr. Clarissa Cole — we explore the horrific Lewis-Clark Valley murders and disappearances of nearly 40 years ago that have been recently reopened and may be solved in the Investigation Discovery documentary special Cold Valley. We talk with Cold Valley star Detective Jackie Nichols and get exclusive analysis of the case from Dr. Clarissa Cole at 10pE; at 9pE, we review the latest True Crime headlines wonder why people do these things.

Cold Valley –– a riveting investigative documentary that follows two women as they work to unravel mysterious disappearances that tormented the Lewis Clark Valley in the 1980s — is coming November 29 and December 6 at 9pE to Investigation Discovery. Between 1979 and 1982, five young people vanished in the small Lewis Clark Valley area along the border between Washington and Idaho. To this day only three of those bodies have been found, and the other two disappearances remain a mystery.

The local police worked for years to find the culprit, but with minimal evidence and no leads, the cases were shelved. Nearly 40 years later, Asotin County Sheriff’s Detective Jackie Nichols feels a personal obligation to revisit these cases and she will leave no stone unturned as she dusts off the case files, tracks down old witnesses, and pursues new leads. Nichols has spent countless hours in the pursuit of truth, and the clues all point to one Person of Interest. She knows his name, but she can’t reveal it until she is sure she has the evidence to prosecute him in a court of law. Nichols has one last chance for justice, and time is running out.

Joining Jackie on this hunt is Gloria Bobertz, a cousin of one of the victims. She has dedicated her life to finding answers, tracing the Person of Interest’s every move in the hopes of revealing that he has committed crimes across the country. Her exhaustive research has unearthed new clues, including a trail of additional dead bodies that appear to follow the suspect from one city to the next. Despite their extensive list of circumstantial evidence, both women know that they need something more concrete to bring him to court. Will Nichols and Bobertz find the direct evidence they are looking for or will all their time and research be for nothing? COLD VALLEY documents the hot pursuit for a killer who has evaded justice for decades.

Jackie Nichols is the only detective working for the Asotin County Sheriff’s Office in Washington. She jokes that she got the job because she’s the “only one who wanted it.” The truth is she’s a remarkable detective with an amazing reputation. In 2015, she convicted a relative of Al Capone for murder and she did it without the victim’s body. Her daily workload includes traffic collisions, animal abuse, injuries caused by animals, fraud, robberies, and thefts. With whatever time she has left, she attempts to solve the Lewis Clark Valley cases. They are never far from her mind; a photo of 12-year-old Christina White hangs on the wall near her desk.

Jackie was born in Boston and grew up in Vermont. She graduated from college with a graphic arts degree. She was a stay-at-home mom, a veterinarian’s technician, and a corrections officer before becoming a detective. She has four children and is married to Ben Nichols, Prosecuting Attorney for Asotin County.

In April of 1979, 12-year-old Christina White went missing from Asotin, Washington. She had just been to the annual county fair, but had telephoned her mother at home to say that she wasn’t feeling well. Her mother agreed to pick her up at the bottom of the hill near the fair, but when she arrived, Christina was nowhere to be found.

A resourceful girl, Christina had hopped on her bike and gone to a friend’s home to ask for a wet washcloth to put on her neck. 25-year-old Lance Voss answered the door (Christina’s friend was out back washing the dogs). He claims that he wet a washcloth and gave it to her. Then Christina took off on her bicycle…never to be seen again.

On June 26th of 1981, 22-year-old Kristen David – an avid bicyclist – went missing from the Lewiston, Washington area. She had been traveling to her summer job at a factory (during the school year, she sometimes worked at the Lewiston Civic Theatre). Several days later, on July 4th, some fishermen near the Red Wolf Crossing Bridge found a floating black plastic bag. Inside of it they found a woman’s torso and a leg. They called the police to the scene, who immediately found more plastic bags containing more body parts. The body was that of Kristen David, who had last been seen cycling down the road, and perhaps stopped to talk to a man in a van – but witnesses couldn’t be sure.

On September 12th, 1982, 21-year-old Kristina Nelson and her 18-year-old stepsister, Brandi Miller left home to go to the nearby Safeway (grocery) store. Kristina had even left a note on her door for her boyfriend, telling him to go inside because she would be right back. But when neither girl showed up by the next morning, Kristina’s boyfriend called the police and reported them both missing. One year later, two sets of skeletal remains were found at the bottom of a steep ravine near Kendrick, Idaho. They were identified as Kristina and Brandi. Their clothing and a piece of severed rope was found nearby.

Also on September 12th, 1982, 35-year-old Steven Pearsall went missing from the Lewiston Civic Theatre, where he had gone to practice his clarinet and do some of his laundry in the theatre’s machines. Pearsall worked at the theatre as a janitor and set-builder. Notably, victims Kristina Nelson and Brandi Miller also worked at the theatre part-time, as they both attended college at Lewis-Clark State.

One more “coincidence” that cannot be ignored is that there was one additional person who worked regularly at the Lewiston Civic Theatre: Lance Voss.  AND, Voss admitted to being the final person to see little 12-year-old Christina White alive.

Click over for the rest of Clarissa’s cogent analysis on The Criminal Code site.