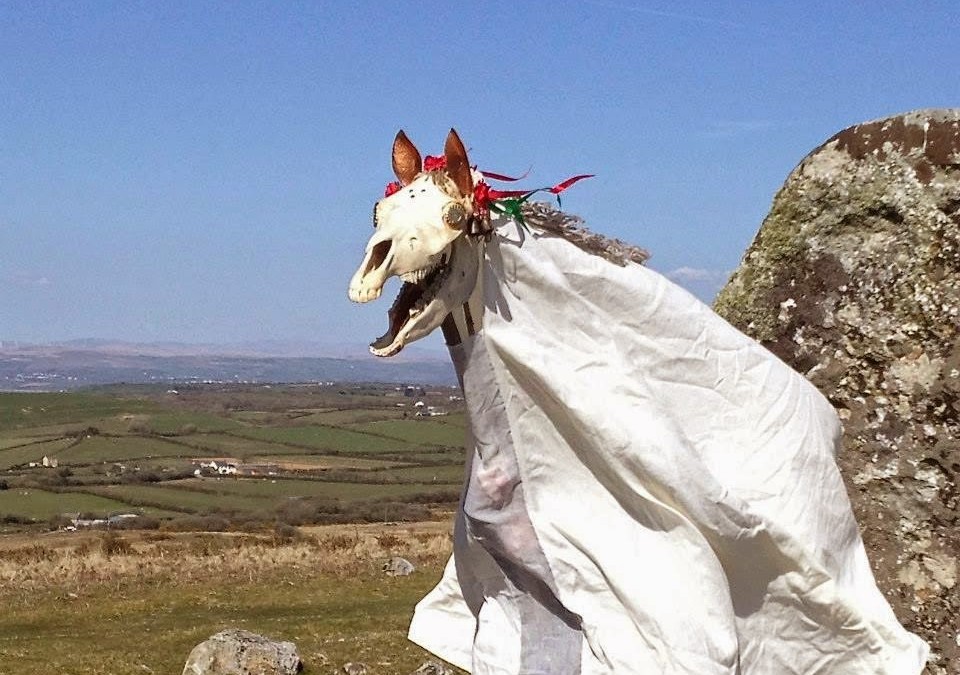 Mari Lwyd (Gray Mare) is a mischievous, rhyme spouting, party animal Christmastide figure in Wales consisting of a horse’s skull with a hinged jaw — all the better to nip you with, my dear — perched atop a pole, and carted around by a man inside a white sheet.

Mari Lwyd and her band of merrymakers take traditional caroling to a rollicking level of festivity, going door to door at houses (or pubs) and engaging in a battle of 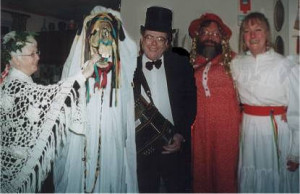 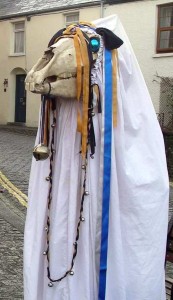 rhyming verses and insults with the inhabitants in an effort to earn their way inside. Whoever stumbles first in the rhyme battle is the “loser,” but Mari Lwyd always ends up being invited in regardless because “she” brings good luck for the coming year by scaring the snot out of any lingering negative spirits.

Once inside, the singing continues, and the Mari Lwyd bands are known for their impressive capacity for food and drink and good-natured flirtation with the ladies. The roving pack of merrymakers might include a Leader, who holds the reins of the horse; a Sergeant; Punch and Judy; among others, all in costume or disguise.

Here’s a translated version of a typical exchange:

The Mari Lwyd party sing:
“Open your doors,
Let us come and play,
It’s cold here in the snow.
At Christmastide

The House-holders reply
“Go away you old monkeys
Your breath stinks
And stop blathering.
It’s Christmastide.”

Outsiders:
“Our mare is very pretty (The Mari Lwyd),
Let her come and play,
Her hair is full of ribbons
At Christmastide.”

House-holders (Giving in)
Instead of freezing,
We’ll lead the Mari,
Inside to amuse us
Tonight is Christmastide.”

Where did this peculiar shenanigans come from? In Celtic Britain the horse was a symbol of power and fertility. Animals that had the power to cross between this 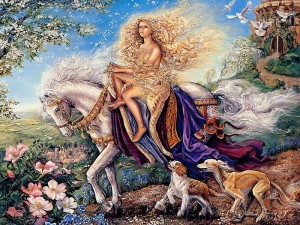 world and the underworld were portrayed as white or gray. For example, Rhiannon, horse goddess and Queen of the Underworld, rode a majestic white horse. In addition, battles of wits between unequal opponents involving trickery and deception allowing the underdog to win are common in the tales of the Mabingion, the earliest recorded prose literature of Britain, compiled from the oral tradition in the 11th and 12th centuries by Welsh writers.

So the Mari Lwyd observance can be seen as a powerhouse of compressed Celtic mythology: with the horse figure in white, the “return” of the horse from the underworld at the doorstep of the new year, and the battle of wits between humans and an otherworldly entity.

As with many pre-Christian traditions, the Church was uncomfortable with Mari Lwyd, and with no obvious way to co-opt it under a Christian/Christmas umbrella, tried to stamp it out, railing from the pulpit against its bawdy rhymes, cheeky comportment, drunkenness, and pagan symbolism. Ironically, by the mid-19th century the practice had dwindled until a Mari Lwyd-hater, the Rev. William Roberts, who write a book, The Religion of the Dark Ages, where he warned against the dangerous nonsense of the Mari and transcribed 20 of the verses commonly sung so that his readers would recognize them and avoid them. Instead, with the verses in print, he provided a script for the revival of the practice!

After dying down again by the mid-20th century, Mari Lwyd has come back with a vengeance over the last few decades, at least in part as a regional cultural response to the globalization of Christmas, in particular the fluffy American Christmas.