The Christmas Witch: Legend of La Befana An Italian Twist on the Feast of the Epiphany

Many of us here in the United States are familiar with The Twelve Days of Christmas, made famous by the catchy song. The Christians among us may know the twelve days as those after December 25th that take us throughThe Feast of the Epiphany – January 6. 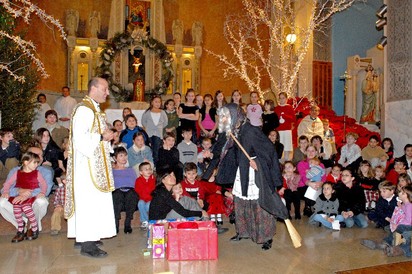 The Feast of the Epiphany is celebrated by Catholics and many Christians as the day the three kings (or wise men) reached the birth place of the baby Jesus. They brought with them wondrous gifts of gold, frankincense, and myrrh. This is one of the reasons we exchange presents on Christmas morning.

In Italy, this holiday is almost as important to their predominately Catholic population as Christmas itself! The Feast of the Epiphany gets a little help from an unlikely character – a Christmas witch known as La Befana. 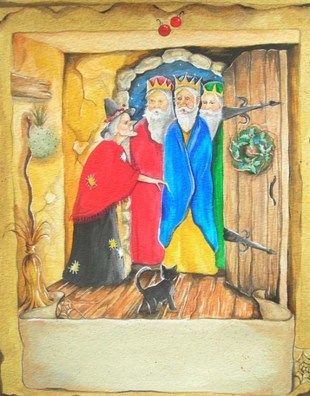 The legend of La Befana began (possibly in Urbania) with an old Italian woman who was a wonderful housekeeper, the best in town some say. Always with a broom in her hand, Befana was known by all in her village.
After that the legend varies. In fact there are many versions of this popular tale.
In the first version, the Befana was approached by three traveling wise men (the biblical magi) who were following a great bright star which would lead them to the new born savior. They stopped to ask for directions hoping Befana would know the way they should proceed. She did not, but gave the weary travelers food and shelter for the night.
In the morning they asked Befana to accompany them on their journey, but she declined, claiming she had too much housework to do. After the wise men left, Befana realized the mistake she had made and set out to find the men and the baby Jesus.
She searched and search but was unsuccessful. Heartbroken, Befana now leaves toys and treats for all the good children on eve of January 5th. The bad kids get lumps of coal in their
stockings. 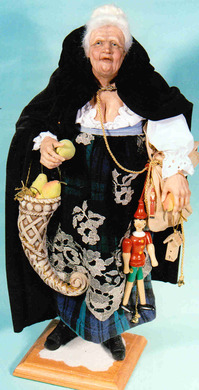 But there some variations to the legend of The Christmas Witch.
In one version, Befana, a loving devoted mother, was overcome with grief at the death of her only child. Her sorrow turned to madness when she heard of the birth of Christ. Befana believed Jesus was her son and made journey to find him. When she final met Jesus, he was touched by her story and gave her a lasting gift. Befana was to be the mother of all children in Italy!
Another slight twist on the first version states that the three kings came to Befana as they searched for baby Jesus, but she was too busy with her housework to help them and turned them away.
Later, Befana noticed the bright star in the sky and knew she had been wrong not to help the magi. She set out with a sack full of gifts and treats, hoping to find the new born king.
Befana never found Jesus or the wise men, but she goes from house to house, stopping at the homes with children. If the child in side has been good, she leaves pieces of chocolate or small gifts in their stockings. If the child has been bad, she leaves the ever dreaded lump of coal.
The story of Befana: The Christmas Witch has many similarities to our western Christmas traditions, right down to the stockings and coal. She is another one of Santa’s helpers and another reason for children to behave and keep the house clean during the holy season. 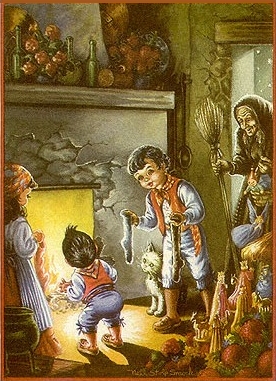 It is said that Befana likes a clean house and will pass by a dirty one. In some cases, Befana will actually clean the house for the homeowner! I’m beginning to like this legend more and more!
In Italy, this is much more than a children’s story. Italians have a huge celebration to mark the Feast of the Epiphany and the coming of La Befana. Tens of thousands of people celebrate this heralded housekeeper with parades, parties, and her very own feast day. Children write letters to the Befana (much like Santa) pleading their case, exclaiming their cleanliness, and imploring her to leave them gifts.
The winter or Christmas break does not end until after January 6, the church’s recognition of the Feast of the Epiphany. Children will end their holiday after today and, like my own kids, begrudgingly go back to school, counting the days until next year.
I personally love the legend of La Befana! I love the story of the three kings, the biblical tie-in to the giving of gifts in a non Santa-heavy way. As a mother I can relate to La Befana, more so than a traveling king. I also love the magical quality of The Christmas Witch as it hearkens back to my favorite holiday, Halloween. 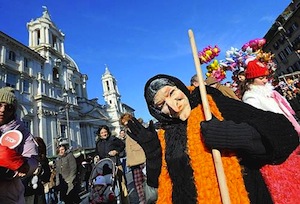 My partially Italian children are more than happy to squeeze one more day of presents out of the holiday. It’s a way for them to refocus on the real meaning of Christmas – the birth of Jesus. It’s hard to keep the commercial out of Christmas, but traditions such as this will certainly help.
This year the Argie children celebrated the end of the Christmas season in true Italian style! They wrote a letter to La Befana (online if you can believe it! I guess she has Internet access.)
They set out offerings to Befana in the form of wine, cheese, crackers, and water (Jack insisted she’d need water on her long journey.) The house was cleaned, prayers were said, and stockings were rehung for a final night. 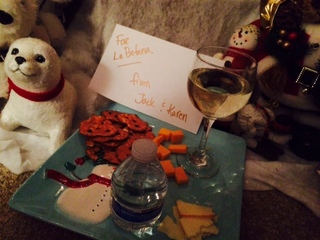 La Befana did not disappoint. In the morning it was clear she had been here. The offering plate (Santa’s cookie plate) was empty, even the water, and the stockings were filled with small gifts for my children. Nothing big, but they were delighted nonetheless.
And now it is done. Another holiday season finished. It is a bittersweet day but a necessary one. I mark the Feast of the Epiphany and the coming of La Befana as the day the Christmas decorations finally come down.
The Haunted Housewife is happy to welcome La Befana into her Christmas traditions. After all, she represents a side of the holiday that has very special meaning to me as a Catholic and as a mother. It could be said that La Befana is herself a haunted housewife, haunted by the regret, haunted by her desire to be with her child, haunted by the spirit of Christmas itself. 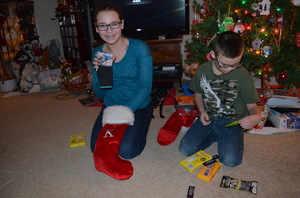 I embrace the end of the holiday with a warm welcome to the Befana. I raise a toast with a glass of wine and a heart filled with joy. Until next year, I wish you all a very happy 2015.