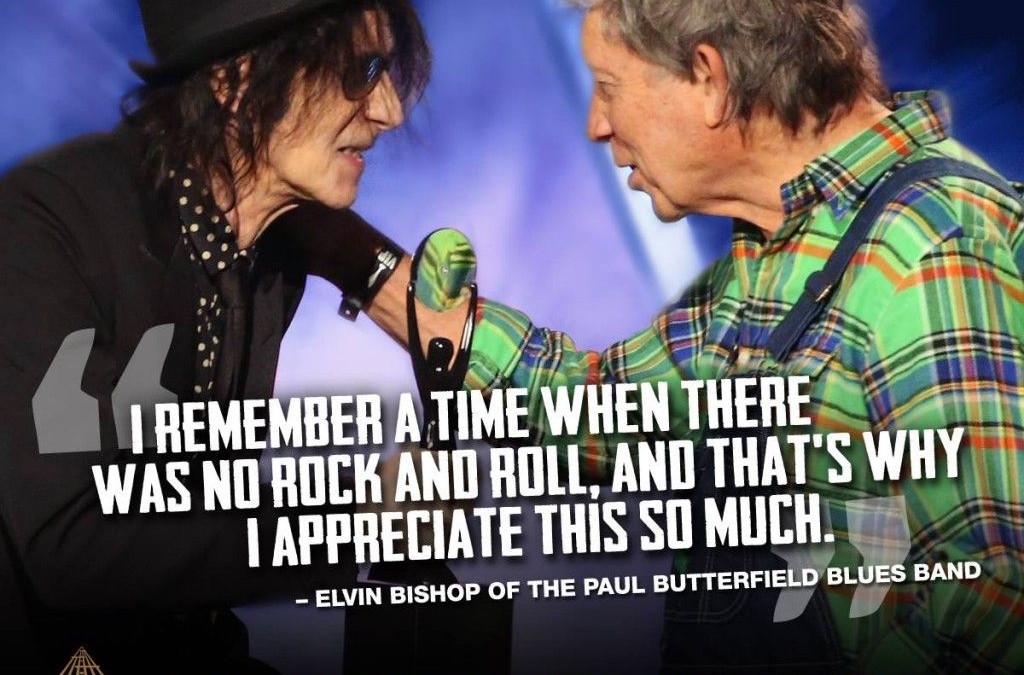 Join After Hours AM Storytellers, with hosts Joel Sturgis and Eric Olsen, live tonight at 9pE as we celebrate the Rock and Roll Hall of Fame Class of 2015 with inductee Elvin Bishop, 44 years of “genuine houserockin’ music” with Alligator Records founder/owner Bruce Iglauer, and one of Alligator’s most exciting recent finds, Florida blues fireball Selwyn Birchwood.

Among the standout acceptance speeches and performances was that of guitarist/singer/songwriter Elvin Bishop, who was inducted for the groundbreaking music he made with The Paul Butterfield Blues Band 50 years ago. Not even close to resting on his laurels, Bishop’s latest solo album — Can’t Even Do Wrong Right, on legendary blues label Alligator Records — has been hailed as one of the best of his long and storied career.

Rolling Stone says it’s “among Bishop’s very best… Impeccable playing by a legendary guitarist…engaging singing and most notably, good spirits… a great showing for a distinguished American player.” In the instant classic title track, Bishop spins a tale of a not-too-smart criminal getting caught by his own foolish missteps. The shaggy dog story, fueled by Bishop’s down-home delivery and deep blues slide guitar, is an affirmation of the Chicago Sun-Times’ ebullient praise: “It’s impossible not to like Bishop. He’s always singing something lowbrow and uplifting.”

In addition to his new album and his Rock Hall induction, Bishop’s 1975 hit “Fooled Around And Fell In Love” came roaring back in the 2014 box-office smash Guardians Of The Galaxy, the soundtrack of which hit #1 on the Billboard album chart, and with the music figuring prominently in the plot of the film.

Wrote the NY Times when Alligator Records celebrated its 40 anniversary in 2011, “Chicago is famous for many things but only Alligator Records has been able to successfully mine one of the city’s most precious treasures–the blues. With muscular, no-frills production, Alligator catches the blues as it melds with soul, rock, gospel, country and zydeco, partying away the pains of love. Alligator is the leading record label for the blues, and has succeeded where the giants have failed.”

Back in 1971, 23-year-old blues fanatic Bruce Iglauer was both frustrated and motivated. As a shipping clerk for Bob Koester’s Chicago-based Delmark Records, Iglauer wanted the label to release an album by his favorite band, Hound Dog Taylor & The HouseRockers. Koester just wasn’t interested, so Iglauer gathered up what little money he had and decided to do it himself. 44 years later Iglauer and his label are still going strong, even in this era or extreme turbulence for the record industry.

Rising meteorically out of Florida, Selwyn Birchwood is a guitar and lap-steel-playing bundle of pure energy. He delivers his original songs with a revival tent preacher’s fervor and a natural storyteller’s charisma made all the more impactful by his raw, unvarnished vocals.

Birchwood plays high-octane blues – rooted, funky, up-to-the-minute – with passion and energy. With a rollicking band behind him, the tall 29 year-old with a trademark Afro roams the stage (often barefoot), ripping out memorable guitar licks with ease.

His ability to win over an audience – any audience – is proven night after night on the bandstand. With his warm, magnetic personality, Birchwood is as down-to-earth as his music is fun, thought-provoking and vital. “There’s nothing I’d rather be doing than playing the blues,” he says. “And I try to convey that with every song and with every performance.”