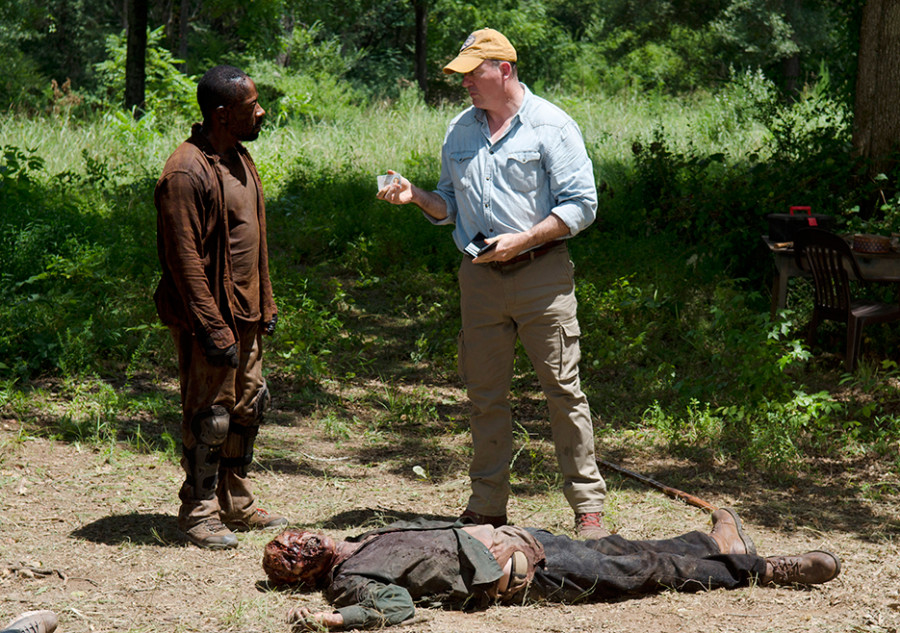 And so it was Morgan’s turn. Extending the Glenn cliffhanger an additional excruciating week, last night’s episode of The Walking Dead, entitled “Here’s Not Here,” is a stand-alone focused entirely on the journey of Morgan (Lennie James) from sometime in the equivalent of Season 3 until he spots the fateful sign by the railroad tracks and heads in the direction of Terminus in what we presume to be the equivalent of Season 4 or 5.

More important than the character’s physical wandering, however, is his transformation from grief-crazed killing machine to aikido-trained man of peace, armed only with a staff, like a shepherd – perhaps a shepherd of men.

Driven mad with grief after the horrific loss of his wife and son, Morgan mutates — not illogically in a kill-or-be-killed world — into a solipsistic scrounger and killer of zombie and man. Steeling himself with repeated verbal and written aphorisms, he follows the logic of the post-apocalypse to its merciless conclusion: the only way to be safe is to kill everything that moves, become the aggressor, “clear” as much territory as possible of all possible threats, i.e., all living things. 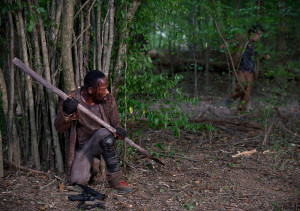 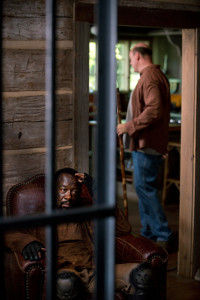 Early in the episode, as he makes his way stealthfully through the woods, Morgan perceives that he is being followed. Without a moment’s thought as to the motives of those following him, he hides behind a tree with his spear and stabs one man in the throat as he walks by, before pinning the other down and strangling him with his bare hands. One can see a momentary flash of recognition, of humanity, in Morgan as he throttles the second man, but he suppresses any instinct toward mercy, which he now sees as weakness or stupidity, and does what he believes he must.

By the time Morgan stumbles upon a remote homestead and instinctively heads toward the goat penned out front, he is a twitchy, paranoid death-dealer with a hair trigger. He is alive, yes, but at the cost of his sanity and humanity. He has become the enemy.

An unseen voice asks him to leave the goat alone; Morgan goes into full stalk mode, but the other man is too wily and quick and knocks Morgan unconscious with his stick. Morgan wakes up in a cell in the man’s home. Large, shambling and bald with a sad, kind face and voice, the man, Eastman, feeds Morgan and tosses him a book, The Art of Peace. Bizarrely, the actor playing Eastman, John Carrol Lynch, played Twisty the Clown in American Horror Story Freak Show, and John Wayne Gacy in the current AMH Hotel. James and Lynch are essentially the only characters in the 90 minute episode and are superb. 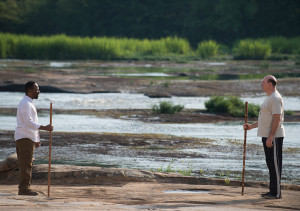 With almost inhuman patience, Eastman, who was a forensic psychiatrist in the before-world, outlasts Morgan (who keeps shouting “Kill me!”) and begins training him in the discipline of aikido, which, impossibly, ridiculously in this world of all-against-all, places life above all else, including the life of one’s opponent. Eastman believes all, well virtually all, humans are redeemable and therefore precious. It was a revolutionary credo when Jesus espoused it 2,000 years ago, is a radical worldview now in our world, and is almost inconceivable in The Walking Dead world. But Eastman makes it clear that it’s the only way to peace, the only way to appease the voice inside one’s head, the voice that Morgan has done everything he can to suppress, the wildly impractical voice of human morality.

And that’s what this episode is about, and maybe what the show is ultimately about: the existential strain between ruthless practicality and morality. It IS practical, logical to proactively clear one’s path of all potential threats. The only way to guarantee survival is by killing all POSSIBLE threats, even before they threaten. This is survival. But is survival enough? At what point does one try to “live” rather than just survive? When is mercy not simply weakness? What is the meaning of justice? What is the value of life?

Ultimately, the show is a tragedy buoyed with hope, just like life.