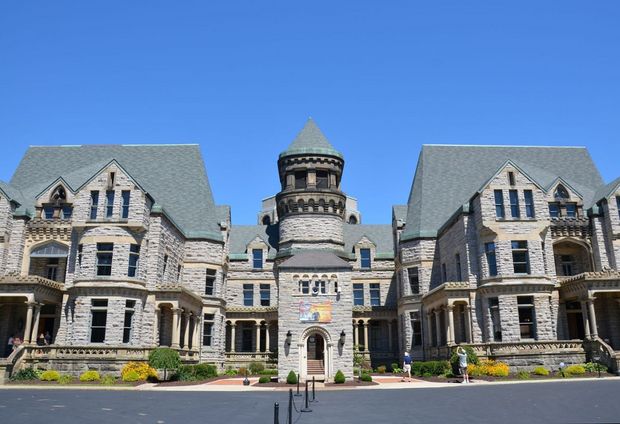 Just one year after its publication, America’s Most Haunted: The Secrets of Famous Paranormal Places by Eric Olsen and Theresa Argie has become a standard in field, chronicling the history, legends, and current paranormal activity of America’s ten most haunted public locations via original research and investigations, interviews, and the paranormal media. Below is an excerpt from the chapter on the Ohio State Reformatory, the most haunted location in the nation!

From its idealistic conception to its ignominious demise and beyond, the Ohio State Reformatory (OSR) at Mansfield has always been an iconic structure. Although it once represented a brighter path for thousands of wayward young men who passed through its corridors of stone and steel, despair and violence play an equal role in its legacy. The cold stares of prisoners long removed from their cages seem to follow visitors as they walk the stark, desolate cell blocks. Decades after their sentences were complete, a number of inmates linger on in the form of Mansfield’s many ghosts.

OSR opened for business amid much local fanfare in September, 1896. On December 31, 1990, it was closed by a federal court order because of “brutalizing and inhumane conditions.” Over 154,000 inmates passed through its gates over the years, but more than 200 never checked out, victims of disease, murder, accidents, and suicide. 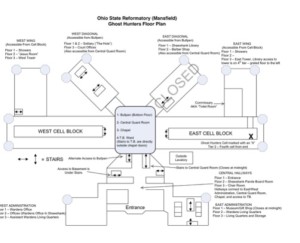 Built with an idealistic eye toward the rehabilitation of young, first-time offenders —t he middle cog in a “graded” state penal system between the juvenile Boys Industrial School and the hardcore Ohio Penitentiary —the reformatory was intended to be much more than just a warehouse for convicts. It was a self-contained city featuring a working farm, a tailor shop, a cannery, a shoe factory, a furniture factory, and a print shop, the whole of which doubtless contributed to the improvement of its more improvable denizens over the decades.

Sadly, within a few decades OSR had gained a reputation as one of the country’s more beleaguered prisons, plagued with overcrowding, violence, disease, and federal civil rights violations, living up to the popular inmate nickname “Dracula’s Castle.”

Not surprisingly, a number of murders and suicides erupted out of these conditions. Most spectacularly, a 22-year-old inmate named Lockhart immolated himself in his cell in order to escape the confines of the reformatory in 1960.

The tumultuous past of the prison includes the murder of two guards, and the killing of the reformatory’s farm boss and family, who were kidnapped and shot to death by vengeful parolees in the middle of a “mad dog” killing spree in 1948. But by far the most perplexing death at the reformatory was that of Helen Glattke, wife of longtime superintendent Arthur Glattke, who died as the result of a gunshot wound in 1950.

Though her death was ruled accidental, questions remain, and her spirit is thought to be one of the most active at the prison.

The visually striking, 250,000 -square -foot stone structure—which boasts the world’s largest freestanding steel cell block—has been the setting of numerous TV and video productions and the feature films The Shawshank Redemption, Air Force One, Harry and Walter Go to New York, Fallen Angels, Tango and Cash and The Dead Matter. 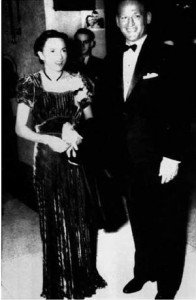 The Tragic and Mysterious Demise of Helen Glattke

Not all resident spirits of the reformatory are former inmates. One of its most famous lived the comfortable, even stylish life of a superintendent’s wife. Perhaps she couldn’t bear to leave, or perhaps she has a story yet to tell.

Arthur Glattke and Helen Bauer met while working on the Ohio gubernatorial campaign of Democrat Martin Davey. Davey won office in 1934 and appointed Glattke — who had been a high school coach and teacher in Toledo—superintendent, or warden, of the Ohio State Reformatory in 1935. He and Helen were married that same year.

At the reformatory, the Glattkes, who had two sons, lived in the front, castle-like portion of the facility, away from the dark realities of the cell blocks, from the time of their marriage until Helen’s death in 1950.

Around 10:15 Sunday morning, November 5, 1950, Mrs. Glattke, a Catholic, was getting ready for church. The official report states that while reaching up to her closet shelf for a jewelry box, she accidentally dislodged a hidden .32-caliber semi-automatic handgun, which fired a bullet into her left lung as it hit the floor.

She died of complications from the injury at Mansfield General Hospital two days later at age 41.

Whispers circulated among inmates and staff that the superintendent had been involved in an extramarital relationship and that there had been a vocal argument about it just the night before. It was rumored that Helen had come home early from work, discovered the indiscretion, and wanted a divorce. Some a 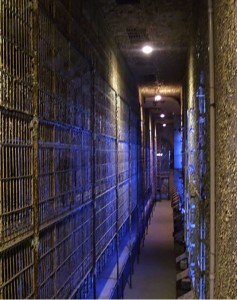 lleged that Arthur had his wife killed to cover up this affair, or to preclude a career-threatening divorce.

There is no evidence — beyond the persistent rumors — that Helen Glattke was murdered, or that her death was anything but an accident. Oddly, no outside investigation was ever conducted, although a number of gun experts have stated it is “very unlikely” that a .32 -caliber semi-automatic pistol could have discharged in the manner stated in the official account.

On February 10, 1959, Arthur Glattke, a large man who had been a star football lineman at Wittenberg University in the 1920s, suffered a heart attack at his office desk and died shortly thereafter at Mansfield General Hospital.

Some believe Arthur was haunted by the spirit of Helen. A ghost thought to be Helen’s has been reported around the Ohio State Reformatory since shortly after her death. Even while the prison was still in operation, employees and visitors claimed to smell her distinctive, rose-scented perfume emanating through the hallways of her former living quarters, and ghost hunters have caught glimpses of her walking through her pink bathroom as she did many times while alive.