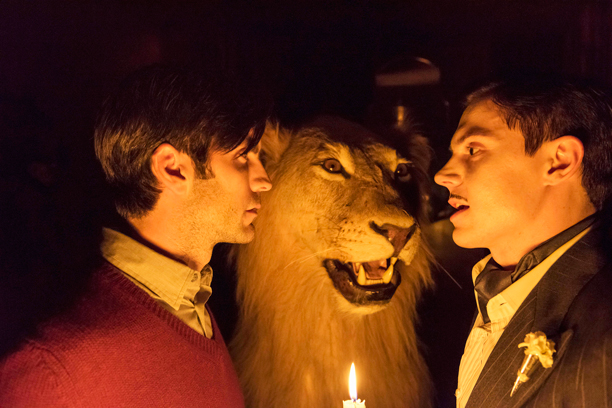 While loving the portentous buildup and lavish settings of the “Ten Commandments Killer” reveal on last night’s American Horror Story Hotel, the actual facts on the ground make my brain swell and leak out my ears.

Lowe threatens Liz Taylor at the bar, demanding to know the identity. She demurs with a threat of her own. A trembling Sally offers to take the sweaty detective 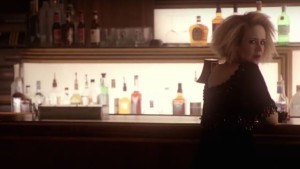 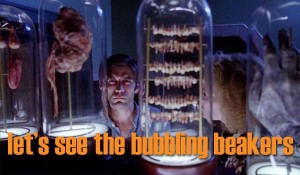 to the room where all will be revealed. It’s John Lowe’s selfsame room 64! The orotund elocutions and Clark Gable moustache of James Patrick March await them there. There’s a creepy secret trophy chamber behind the huge armoire full of animal and human keepsakes upon the walls and in glass cases.

“It’s you, John. It’s always been you!” cries Sally. And now everything makes sense, except that it doesn’t.

She might have added, “And you’ve been investigating yourself all along, you dumbass!” But she didn’t, because she likes him or something.

Lowe has been coming to the Cortez for five years and has ZERO memory of the place or its inhabitants. He has been having cordial dinner dates and days-long chats with March with regularity about injustice, rage, internal equilibriums, arbitrary rules of society, the Great Man theory, and other pleasantries over the entire period and has NO IDEA any of it ever happened. Or the fact that he sadistically killed and mutilated several citizens for their perceived crimes as instant judge, jury, and executioner. Explanation: he was drunk and/or he had some kind of psychotic break after his son disappeared. 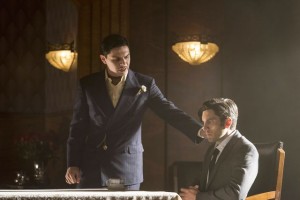 the slightest hint that they had known him for five years or that he was “one of them” in terms of being a deranged killer.

And he’s a detective – for a living. Similarly, no one is his “real life” — not his wife, his fellow police officers, his detective partner, his personal banker — has ever pieced any of this together, even though Lowe mysteriously disappeared for hours and days at a time, over a period of FIVE YEARS.

This is so American Horror Story! What were once thought to be bugs are now clearly features. Few-to-no shows are as meticulously imagined and framed, with wondrous scintillating moments and astonishing performances — Evan Peters as the courtly and philosophical serial killer March is a revelation — but the plot NEVER ends up making sense, as if continuity were a weakness. Can’t they just HIRE someone to review the season scripts and point out the inconsistencies and logical dead ends? We KNOW it’s supposed to be hard to follow, but can’t the show reward the viewers who make the effort with tidy story arcs and logical resolutions?

And what happened to those damned marauding vampire kids?