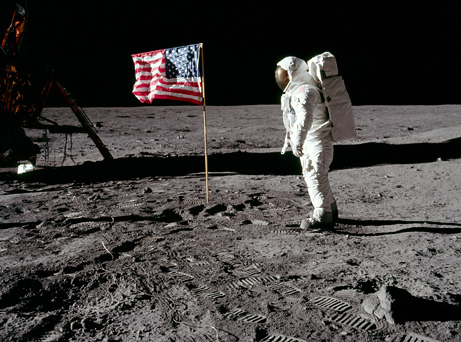 The Moon landing conspiracy theory has been killed again – this time by math. But it won’t stay dead this time either. A 2013 poll indicated 7% of Americans still believed the Moon landings had been faked. Conspiracy theorists are so paranoid about not having the wool pulled over their eyes that they pull the wool over their own eyes, and seem to take perverse, defiant pleasure in doing so. “Ha ha face, I have cut off my own nose to spite you!”

What is particularly perverse about the Moon landing conspiracy theory — actually the Moon non-landing conspiracy theory — is that is displays a double self-contempt: for the technological and scientific capabilities of mankind in general, and for American capabilities in particular. For, obviously, NASA wouldn’t have had to fake the landing if it had been capable of pulling off the real thing.

The theory goes that the U.S. government faked the Moon landings beginning with Apollo 11 in 1969 on a Top Secret movie set in a desperate effort to beat the Russians in the space race, or rather to give the appearance thereof. Before we get to the new math-based conspiracy theory crusher, let’s look at the “evidence” behind the theory, all of which has been debunked previously ad nauseum.

The American flag (see top image) planted by Neil Armstrong appears to be flapping in a breeze that the Moon does not have. But the flapping seen in images and video is all astronaut-caused, first by twisting the flag support rod into the lunar surface, secondly by accidentally bending the horizontal support rod while trying to adjust it. Since there is no air in which to move, the ripples manifest in slow motion.

Who Took the Photo? 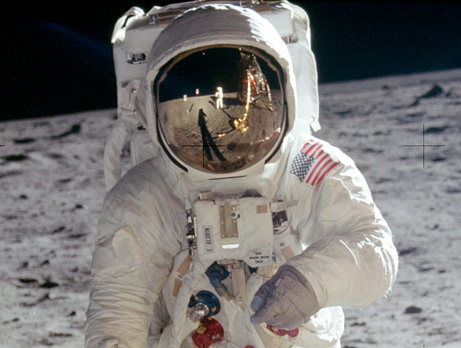 Another perceived issue is the reflection of Armstrong in fellow astronaut Buzz Aldrin’s helmet visor. Since there were only two of them, who took the photo? Cameras were mounted on both astronaut’s chests and in the reflection you can see Armstrong reaching to his chest to take the shot. 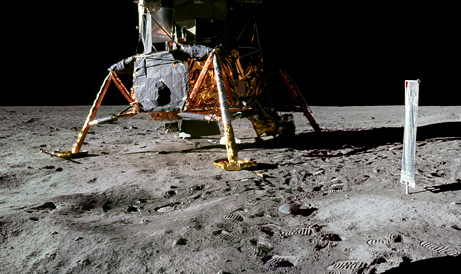 Hey, there’s no crater under the Eagle lunar lander and the dust seems undisturbed! The Eagle’s engines were throttled back just before landing as it eased down, and it did not hover long enough to dig out a crater or kick up much dust.

Where’s the Stuff Left Behind? 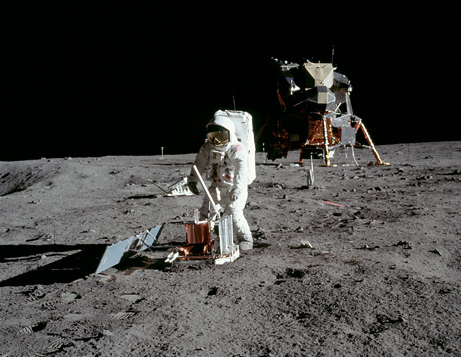 Armstrong and Aldrin left behind part of the Eagle, the U.S. flag, and several other instruments and mementos, including the seismometer Aldrin is adjusting in the above picture – why are none of these object visible in telescope images of the Moon? Because no telescope that yet exists can pick up an object on the Moon smaller than a house.

University of Oxford scientist Dr David Grimes has created a formula that calculates how long a conspiracy can remain undetected based upon how many people are in on the secret, using real conspiracies like the massive NSA spying program revealed by Edward Snowden to provide the calculation numbers. As everyone knows, people are blabber mouths, and the number of people involved in a conspiracy commensurately increases the likelihood that someone will go public. Grimes calculates that, given the number of conspirators involved, 400k NASA employees, that a Moon landing conspiracy could not have lasted more than 3.68 years.

Despite the numbers, Grimes knows a conspiracy theory is hard to kill. “The grim reality is that there appears to be a cohort so ideologically invested in a belief that for whom no reasoning will shift, their convictions impervious to the intrusions of reality,” he said.