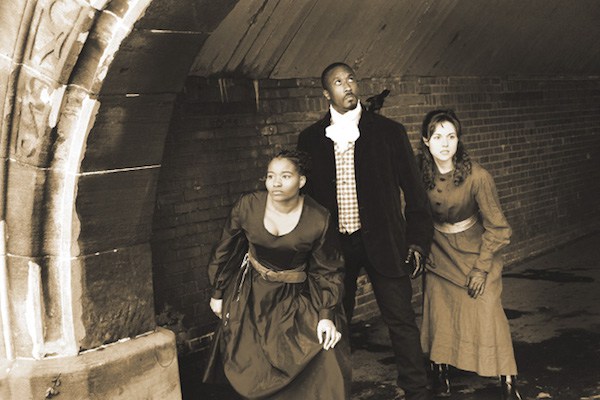 Emily Dickinson: Paranormal Investigator, the new play by Todd Brian Backus, is having its world premiere this month as part of the 2016 FRIGID New York Festival. A founder and Artistic Producer of the PowerOut theater company and a stage director, illustrator, and photographer, Backus was kind enough to answer some of our questions about the show’s “spooky scary literary” premise.

Where did the idea for Emily Dickinson: Paranormal Investigator come from? Obviously people will think of the popular novel Abraham Lincoln, Vampire Hunter and the like, but do you have a particular interest in the paranormal? In Emily Dickinson? In poetry? (Were you by any chance an English major?)

I started gathering poems and stories from Dickinson and Poe and started forming a narrative modeled a little off of the Sherlock Holmes canon. (Who better to build a detective story off of?)

As for the paranormal, I’ve always been interested in ghosts and witchcraft, and have a few friends who practice Wicca, so I’ve tried to be as true to the paranormal of the 1840s as I am to the writers I’m taking a little literary license with. Prior to this project I hadn’t read much of Dickinson or Poe outside of class, but my bookshelves are overflowing with the complete works of Virginia Woolf (including diaries and letters) and I’m working my way through Murakami now, so rest assured, I’m a word nerd.

Does the play comment on the paranormal-themed TV shows that are so popular now?

I put together this story about a 19-year-old Emily Dickinson who is the last line of defense between the everyday and a world of magic, ghosts, and vampires. It had a lot of resonance with the themes of magical girl anime. We make a couple of references in the script and in the staging to Sailor Moon, Card Captor Sakura, and more. It’s something we don’t see as much in the West, but in Japan there’s a more even amount of heroes and heroines championing, to quote Sailor Moon, “Love and Justice!”

It just felt natural to combine these ideas with Emily and Edgar as they work together to combat a curse in the big city. If there’s ever a non-theater adaptation of this, it should definitely be an anime. 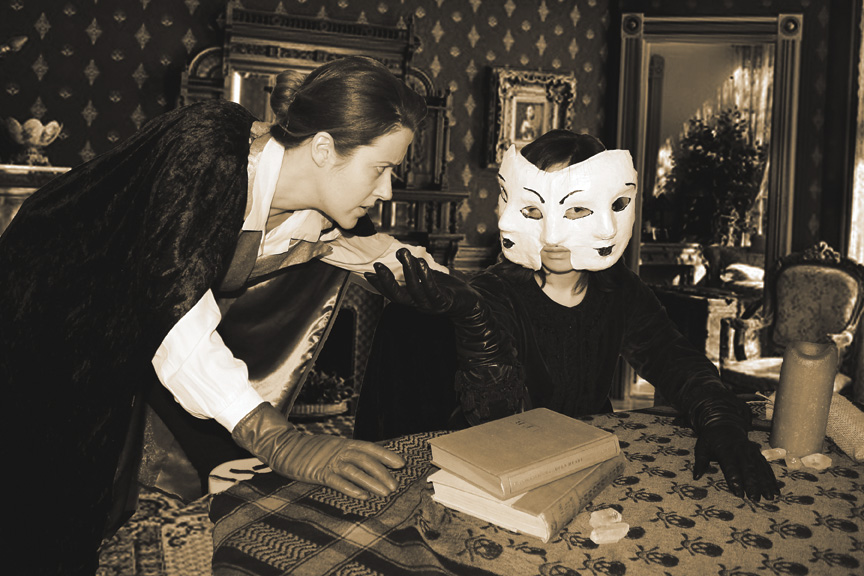 The play teams Emily Dickinson with Edgar Allan Poe. Their lives overlapped but they weren’t exactly contemporaries. What inspired the pairing?

There’s absolutely a lot of resonance between Dickinson’s and Poe’s poetry – if not in their syntax, definitely in their subject matter. They both have a fascination with (and are not altogether fearful of) Death with a capital D. It felt a natural fit that if Emily were battling the paranormal, Edgar would have as well.

We draw on a couple of Poe’s short stories to fill in the backstory of Emily and Edgar, and with their age difference I felt that had they worked together Edgar would have been mentoring Emily in the paranormal arts.

In history they overlapped for about 19 years and I’ve been very careful to set this story in 1849.

Famous spiritualist-fakers The Fox Sisters would seem to fit in very well. But without giving too much away, can you tell me how Whitman and Thoreau made their way into your story? Did either one have an interest in or connection to the paranormal?

Thoreau fits in in an unexpected way that I don’t want to talk about too much right now, but I can tell you a bit about Whitman. While I was trying to find a Moriarty (who was also an American poet) I was at a bit of a standstill. I was collecting poems and biographies from this bookstore, The Green Hand up in Portland, Maine, and I asked the owner one day as she was ringing me up who she thought might make an interesting poet to read up on for this project.

She rattled off a few names real quick and then added, “But if you wanted to be a little weird, Whitman might be your guy.”

So I do a little poking, a little prodding and I find a few things: 1) Walt Whitman is self-described as “The Messiah of American Poetry,” so we’ve got that villainous megalomania on lockdown; 2) Walt Whitman (and you can look this up) is the person Bram Stoker based Dracula’s physique off of. So there was this interesting paranormal/vampire connection and I was really excited about that and started reading up more on him and, well, the rest is history.

Earlier PowerOut productions have dealt with very modern themes relating to internet communication, Twitter and the like. This sounds like a big change in direction. Or are there thematic or artistic similarities in theme, approach, tone?

PowerOut is really exciting to me because it’s helmed by three different director/playwrights and we all work with very different aesthetics. Ben Ferber’s plays often examine internet culture and technology and how they affect our lives; Nora Sørena Casey writes these really beautiful, poetic examinations of flawed people who are trying to just get by, often in situations where they can’t; and, well, this is the first full-length I’ve written and it’s about ghosts, poetry, and Americana. Will that be indicative of all of my writing? I don’t know! I think our differences as playwrights and directors encourage us to push each other to new and exciting directions.

Is the play written partly in verse? How did you approach that challenge?

The play is mostly prose, but snippets of some recognizable poems and many more obscure ones filter in sometimes as a bit of magic and sometimes just because of how the poets’ minds work. It’s been an exciting challenge and I think you’ll find there’s a delightful explanation as to why all of these literary figures are brought together in this particular play.

You’re using the hashtag #spookyscaryliterary which suggests a melding of pop culture with literature. Is bringing those together part of your creative goal?

I think #spookyscaryliterary evokes both of the worlds (and audiences) that I want to bring to this show. It is an exciting action comedy about ghosts and magic but it also is this examination of people very close to, but perhaps not exactly like, the literary figures that we revere in the forms of Dickinson, Poe, and Whitman. I personally think that there’s this mentality that work is either “high art” or “low art” and I think there’s a way to exist in-between and that this sort of piece can do that.

Finally, what do you hope audiences get from the show?

I hope it will be a fun night that brings together people from the comic book world and the literary world (and even those beyond and in-between) and that makes you wonder what might happen if we stopped taking ourselves so seriously.