We had a ripping good time at the Nick Groff Tour event at legendary Ohio State Reformatory in Mansfield over the weekend. For those itching to attend a para-celebrity/ghost hunt event but feeling a bit overwhelmed by the many choices, Nick’s events are a full day of thought-provoking and spooky fun. Slickly run, devoid of attitude, well-paced, interactive, with a clutch of entertaining and varied speakers at iconic haunted-ass locations, AND Nick Groff? You can’t go wrong. 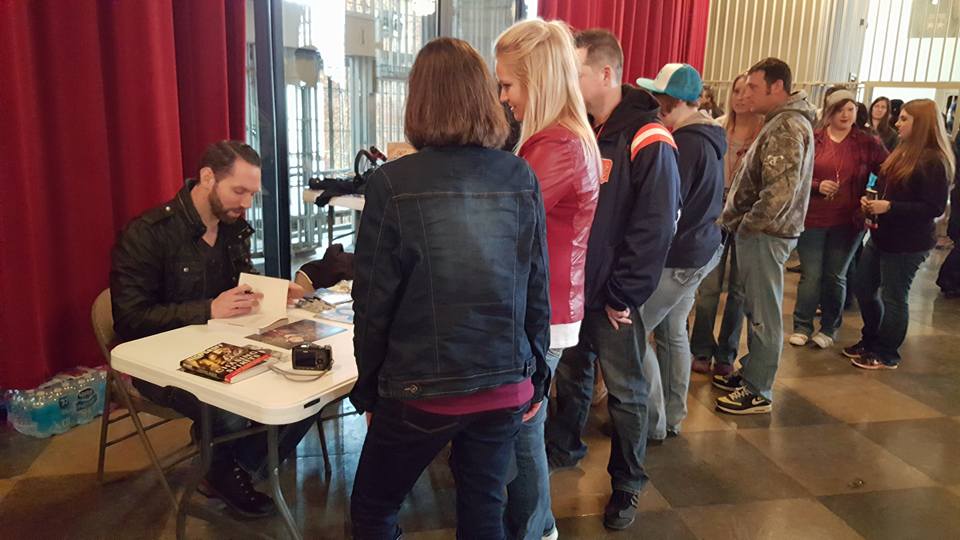 Nick was a driving force behind the original Ghost Adventures documentary and co-star of the series for ten seasons before deciding it was time to head off into fresh paranormal territory under his own direction. Groff exec-produced the intriguing, surprising mini-series Ghost Stalkers, starring veteran investigator and theorist John E.L. Tenney and actor/paranormal neophyte Chad Lindberg. Nick then created his current hit Destination America series, Paranormal Lockdown, starring himself and Katrina Weidman, charming and intrepid young veteran of Paranormal State, Real Fear, and hundreds of investigations.

The challenging precept behind Paranormal Lockdown is that Groff and Weidman spend a full 72 hours locked inside famously haunted locations like Trans-Allegheny Lunatic Asylum, Franklin Castle, and Hinsdale House. The harrowing ordeal requires physical, mental, emotional, and spiritual stamina, and leaves the beleaguered pair drained and vulnerable to influence by whatever entities may be present. 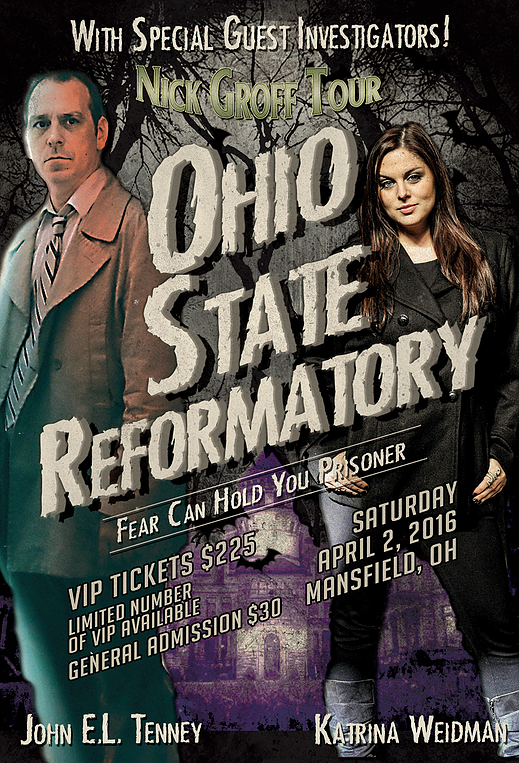 After setting up merchandise tables rimming the central meeting room on the second floor of the Reformatory, squeezed like a fish bowl between two-story-high windows looking out on the massive east and west cell blocks, guests of the Nick Groff Tour streamed in to meet and visit with Groff, Weidman, Tenney, and the hard-charging pair behind the Week in Weird, Planet Weird, and fascinating Traveling Museum of the Paranormal and the Occult, Greg Newkirk and Dana Matthews. Newkirk and Matthews had the Traveling Museum with them and had just appeared on a special episode of Finding Bigfoot, searching for the hairy primate from a paranormal angle. 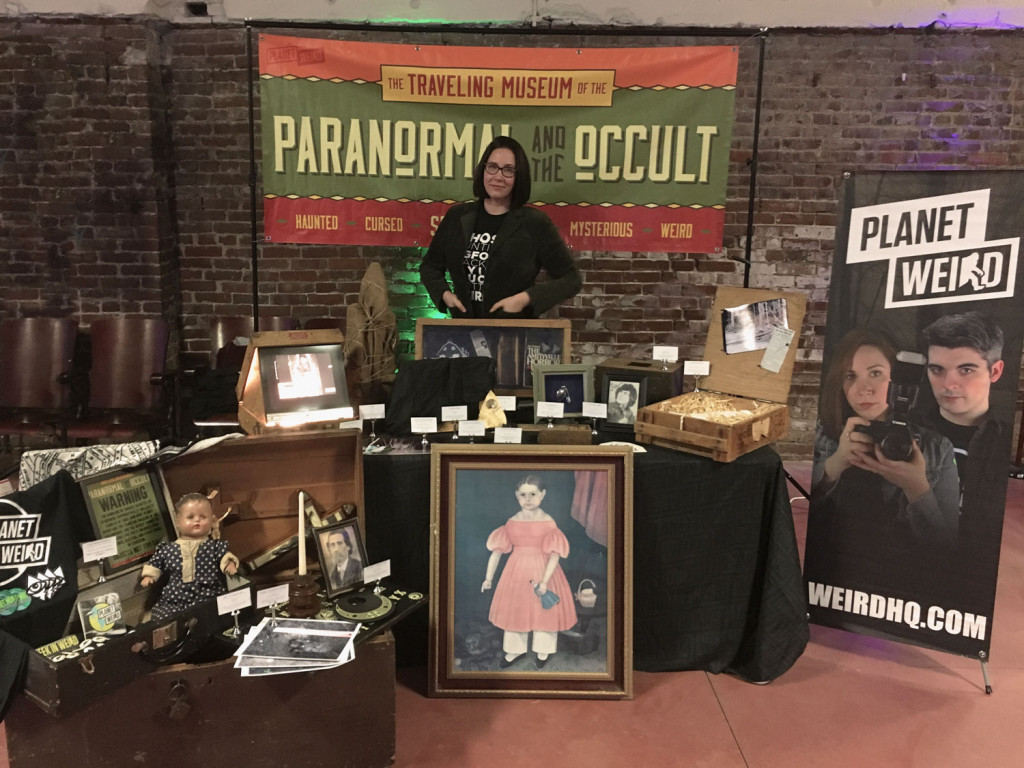 Following the meet-and-greet, Nick Groff Tour guests were treated to a freewheeling and wide ranging Q&A, where Groff, Weidman, Tenney, Newkirk and Matthews answered questions and bantered about such topics as the relationship between religion and the paranormal, Tenney being chased around by an elf (seriously), the bizarre and presumably inhuman Creeper at Trans-Allegheny, protection against paranormal attachment, and the unprecedented weirdness of the Hinsdale House. Newkirk and Matthews admitted they were brought on Finding Bigfoot to allow the show to cover the supernatural angle without the regular team “getting their hands dirty.” A highlight was Groff reminiscing on the earliest (and best) days of Ghost Adventures as the crew was driving around rural Nevada in Zak’s wedding DJ van with “Happy Endings” emblazoned on all sides. The locals weren’t sure if they were looking ghosts or making a porno movie.

After a break and very engaging lecture by “Weirdest Man Alive” Tenney, it was time for photos with the stars, and after dark, the ghost hunt. We had to bag out before the hunt, but having selected the Reformatory as THE most haunted public location in the U.S. for the America’s Most Haunted book, I’ve put in a lot of time poking around the place already.

Here’s an overview of the creepy wonder that is the Ohio State Reformatory from the America’s Most Haunted book:

From its idealistic conception to its ignominious demise and beyond, the Ohio State Reformatory at Mansfield has always been an iconic structure. Although it once represented a brighter path for thousands of wayward young men who passed through its corridors of stone and steel, despair and violence play an equal role in its legacy.

The cold stares of prisoners long removed from their cages seem to follow visitors as they walk the stark, desolate cellblocks. Decades after their sentences were complete, a number of inmates linger on in the form of Mansfield’s many ghosts.

OSR opened for business amid much local fanfare in September, 1896. On December 31, 1990, it was closed by a federal court order due to “brutalizing and inhumane conditions.” Over 154,000 inmates passed through its gates over the years, but more than 200 never checked out, victims to disease, murder, accidents, and suicide.

Built with an idealistic eye toward the rehabilitation of young, first-time offenders ⎯ the middle cog in a “graded” state penal system between the juvenile Boys Industrial School and the hardcore Ohio Penitentiary ⎯ the Reformatory was intended to be much more than just a warehouse for convicts. It was a self-contained city featuring a working farm, a tailor shop, a cannery, a shoe factory, a furniture factory, and a print shop, the whole of which doubtless contributed to the improvement of its more improvable denizens over the decades.

Sadly, within a few decades OSR had gained a reputation as one of the country’s more beleaguered prisons, plagued with overcrowding, violence, disease, and federal civil rights violations, living up to the popular inmate nickname “Dracula‘s Castle.”

Not surprisingly, a number of murders and suicides erupted out of these conditions. Most spectacularly, a 22 year-old inmate named Lockhart immolated himself in his cell in order to escape the confines of the Reformatory in 1960.

The tumultuous past of the prison includes the murder of two guards, and the killing of the Reformatory’s farm boss and family, who were kidnapped and shot to death by vengeful parolees in the middle of a “Mad Dog” killing spree in 1948. But by far the most perplexing death at the Reformatory was that of Helen Glattke, wife of longtime Superintendent Arthur Glattke, who died as the result of a gunshot wound in 1950. Though ruled accidental, questions surround her death and her spirit is thought to be one of the most active at the prison.

The visually striking, 250,000 square foot stone structure ⎯ which boasts the world’s largest freestanding steel cellblock ⎯ has been the setting of numerous TV and video productions, and feature films The Shawshank Redemption, Air Force One, Harry and Walter Go to New York, Fallen Angels, Tango and Cash, and The Dead Matter.

The facility has been operated since 1995 by the non-profit Mansfield Reformatory Preservation Society, whose members work tirelessly to keep this piece of history alive, giving the Reformatory new life as a historical landmark and world-renowned paranormal hot spot.

MRPS has worked to remove debris, replaced roofing, and restored the Superintendent’s Quarters and central guard room between the East and West cellblocks, funded by tour and ghost hunting fees. Paranormal investigators and thrill seekers have flocked to OSR in droves for sold-out public overnight ghost hunts since 1998.

I ran into Ghost Tour Coordinator Scott Sukel at the event, who provided some amazing stories for the AMH book, including this one:

About ten years ago I was showing the last handful of people around on a public ghost hunt at about 4:30 in the morning. The building was dead. They wanted to check out the third floor of West Administration building before heading home.

We went up there and the group scattered to different rooms trying to pick up any last bits of evidence for the evening. I was just standing there in the middle of the hall. The next thing I knew something punched me in the left kidney so hard it put me down on the ground and made a bruise that lasted several weeks.

I’ve never felt anything like it. I tried to pick myself up and brush it off, not letting the guests know exactly what had happened. My priority changed immediately to getting them out of there safely because I didn’t know if this thing was going to lash out at anyone else.

The Toilet Room used to be the first floor of the hospital. When inmates were sick they would get a slip. Every morning guards would line up the inmates with sick slips and walk them down to what is now the Toilet Room. There was a doctor here named Dr. Salts.

According to the book My Thirty Hard Years, 1933-1963 by former Assistant Superintendent Dana W. Allen, the inmates didn’t only go down there because they were actually sick. They would also go down there so they could stand in line with other inmates with whom they wouldn’t normally have contact. That way they could jump them, or pass notes to them, or whatever.

According to Allen, Dr. Salts could pretty much look at you and tell if you were actually sick or if you were down there with ulterior motives. If you weren’t sick, he had this concoction of Epsom salts and castor oil that you would have to drink in front of him. Salts was 6’7” and 350 lbs. That’s about the size of the shadow I’ve seen many times in here.