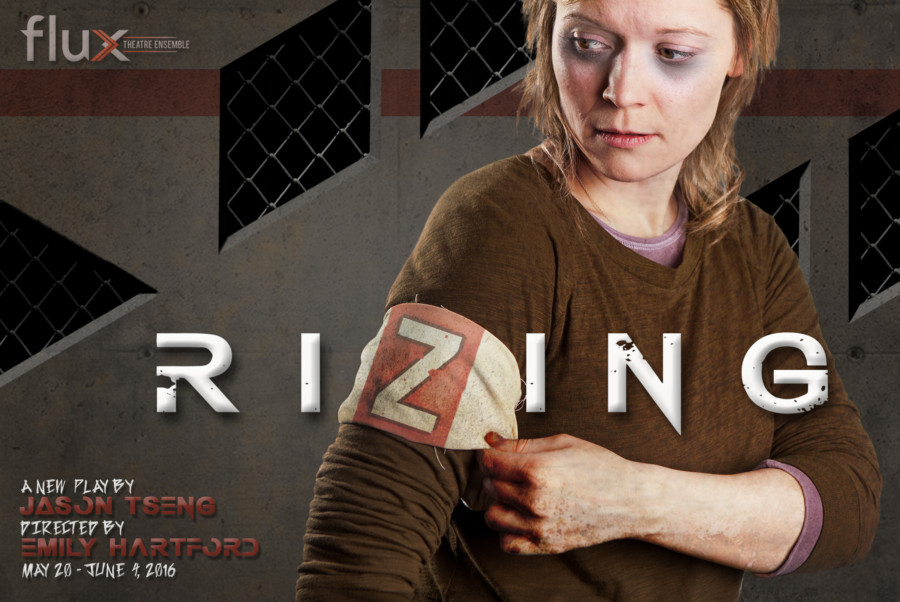 The inexhaustible zombie mythos continues to inspire new stories of the reanimated dead, some with new twists. In Rizing, now in its world premiere by the Flux Theater Ensemble at the Access Theater, playwright Jason Tseng gives us a post-zombie-apocalpyse world, conveniently compressed into a single city, called Shelter. Here medical science has deployed a drug treatment for “zenoplasmosis” that restores the violent, cannibalistic undead to a civil, functional state.

Tseng, director Emily Hartford, and a mostly top-notch cast present a complex picture of a stratified, Brave New World-type society in Rize, where recovering zombies must wear identifying armbands and, absent special permission, keep to a restricted “outer ring” walled off from the inner domain of the “Negs,” who employ them in factories and keep their med levels monitored. 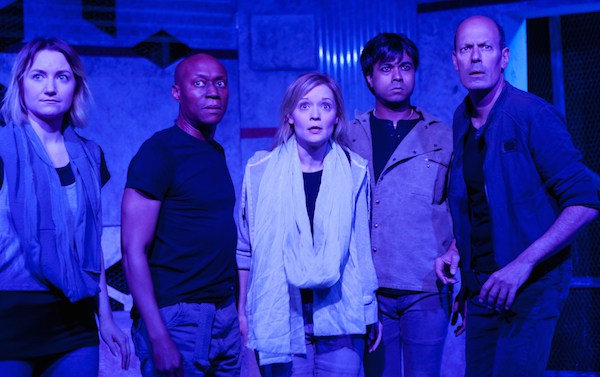 The undead can’t remember their past lives, but they can relate well enough that ex-zombie Mica (Alisha Spielmann, who was so good in the title role of Flux’s Jane the Plain) and Brynne Quillis, a fully alive doctor and medical researcher, have fallen in love and moved in together. (It’s worth noting here that the roles and character names are sex-neutral. The theater company’s freedom to cast as it pleases contrasts tellingly with the story’s themes of discrimination and segregation, which derive from real-world crises around AIDS, immigration, and more.)

Tseng executes his brash premise with equal parts psychological grace and horror-story panache. However, gumming up the good work in the preview I saw were some too-slow scenes, disposable story elements, and a confusing maze of science and mysticism. The production thus took too long to draw its portrait and make its powerful, if obvious, social points about class, discrimination, and assimilation.

Rize held me rapt when, provoked by a threatening confrontation with Dr. Quillis’s father, the General (Arthur Aulisi), who is Shelter’s military commander, Mica “regresses.” Here Spielmann takes zombie portrayal to places it has probably never gone before, after doing the same in a comic mode during the opening scene, which cleverly presents exposition via an undead support-group led by the honest, likable, and vividly real Tulle (Debargo Sanyal).

The pacing was too slow in other places, such as the second scene, which establishes Brynne and Mica’s relationship. The plot thickened pointlessly in a later revelation about a history between the General and Brynne’s new boss Dr. Kestrel Khan (Jessica Angleskhan), Shelter’s Surgeon General and lead researcher – although the scene draws out Aulisi and Angleskhan’s best work.

“I am a person. I am not a monster.” So begins the support group credo, which gives the story its fascination, realized in the remarkable work the actors do. Spielmann and Sanyal are especially good as recovering zombies drawn back towards the “dark side” both by their own essences and by a cabal of ritual-minded, revenge-driven Zealots whose message carries a disturbing truth. Parquet as the noble “Neg” bumping up against a deadly fate, and Daryl Lathon as a onetime radical confined by fate and true love, are acute too.

The too-complicated plot confuses at times, though its twisting recesses also create interesting dramatic sequences creatively finessed by director Hartford with the help of evocative sound, lighting, scenic design, and costuming. Mica’s past and present lovers merge in her drug-heightened awareness. The Zealots, led by Hex (Gavin-Keith Umeh, bursting with comic-book self-assurance), tempt Tulle into their bloody ritual.

Though in some respects there’s just too much here, leading to tangles and slowdowns, there’s a lot to admire as well. Tightening is likely as the production continues through its first week. And anyway, if you can’t go over the top in a zombie epic, where can you?