H.H. Holmes – Maniacally Efficient Master of Murder THE DEVIL IN THE WHITE CITY plagued Chicago at the turn of the 20th century 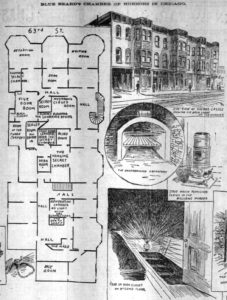 H.H. Holmes (born Herman W. Mudgett) was a master of disguise… well, of deception, really. He needed no fake beard or costume to convince anyone that he truly was what he wanted them to believe. In his life he would be a druggist, a doctor, a barber, a restaurateur, a mortician, a hotelier, and a patent processor – professions that he wasn’t trained or qualified to do. In some ways, he may have disappeared into the annals of history as a prolific con man, and nothing more… that is, if he hadn’t begun killing people… 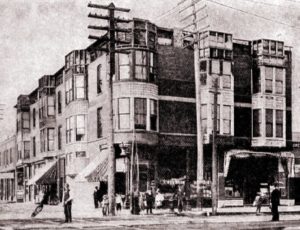 H.H. Holmes’ ultimate claim to fame was the lodging house he designed and built in time for the 1893 Columbian Exhibition in Chicago. While the name on the marquee said, “The World’s Fair Hotel,” it became known simply as, “the Castle.” Inside were airless vaults, sound-proofed rooms, greased chutes down to acid vats, a crematorium, and a dissecting table with surgical tools – just to name a few. After Holmes’ capture, an early edition of the Guinness Book of World Records stated that he was the “most prolific murderer in recent criminal history.” His confirmed body count has since been surpassed (nine), but the untold numbers (100?) indicate that he could very easily still hold that record.  Some have called him “America’s First Serial Killer.”

Raised in a small farming town in New Hampshire, Herman was regularly beaten by his father (unprotected by his submissive mother). He wished for their deaths. He was bullied at school. By age 11, he was dissecting animals (including live ones). He was “very intelligent” in school and teachers thought he’d do well. Unlike many criminals, he didn’t rebel, or drop out. He was compliant until he eventually moved to Chicago as an adult

When Mudgett arrived, he needed a job.  It’s unknown how he heard about the Holtons, but he soon showed up at the door of their Pharmacy. Mr. Holton – the lead druggist and owner – lay dying with prostate cancer. His wife was tending to customers. Mudgett approached and told her that he was “Dr. Henry Howard Holmes,” a druggist who studied at the University of Michigan and asked if she would like some help. Mrs. Holton hired him. Then, after Mr. Holton died, Holmes offered to purchase the pharmacy from her. She agreed. But he failed to make anything other than the initial down-payment. Once legal suit was filed for the rest of the money, Mrs. Holton mysteriously vanished.  H.H. Holmes (sole business proprietor and druggist) was born. 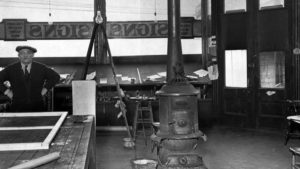 Soon after Mrs. Holton disappeared, H.H. Holmes met and married Myrta Belknap (after knowing her for less than two months). It is thought that H.H. may have actually loved her (in his way). He tried to divorce his first wife (Mrs. Mudgett, still in New Hampshire), but the court dismissed it and he wasn’t allowed. Yet, Myrta never seemed to learn of this.  Nevertheless, their relationship disintegrated when she became pregnant with his child. Holmes abruptly shipped the pregnant Myrta off to live with her parents.

Shortly after she left, Holmes sought to build his hotel and secured a lease across from his store. It was around 160ft by 50ft (3 stories). It contained a walk-in bank vault with a gas jet introduced – the on/off valve installed in Holmes’ bedroom. 51 rooms in all, several were normal. Many were not. Some were airtight with asbestos lined steel plates. Others were soundproofed. Many were rigged with gas jets that went to a control panel in Holmes’ room. All had peepholes (looking in), and could be locked only from the outside. There were sliding panels inside closets (from adjacent rooms), trap doors, and greased chutes that led to the cellar.

But the Columbian Exhibition (where Holmes planned to have his ‘fun’) wasn’t for some time yet. So Holmes rented out the normal rooms, and took up with one of his employees – a married woman named Julia.  Her husband divorced her once he learned of the affair, and she soon became pregnant. Holmes agreed to marry her – only if she had an abortion though – that he would perform himself. He soon sold her disarticulated skeleton to a local medical college for the sum of $200. 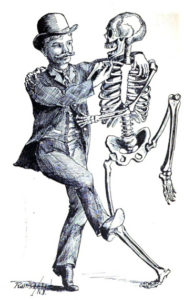 About a year later he met another striking blonde woman named Emeline, who he proposed to as well.  Though he told her to introduce him as “Robert Phelps” to her family, out-of-state. She did so, and even wrote up some wedding invitations to send to them announcing the marriage of “Emeline and Robert.” She was the first victim placed into Holmes’ custom-made bank vault turned gas chamber. And he masturbated several times while listening to her die. The marriage announcements – written in her hand – were sent out the day after her death… and LaSalle medical school acquired another skeleton from Holmes a few weeks later. 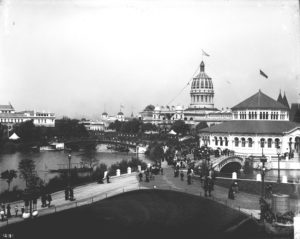 In 1893 (the year of the Exhibition), Holmes met Minnie Williams – heiress to a considerable fortune. The only problem was her sister, Nannie.  He promptly invited her from Texas to see the Fair.  At some point, he took her to “see the Castle” and she was never seen again. Minnie was next. He’d already convinced her to sign over her assets, you see. 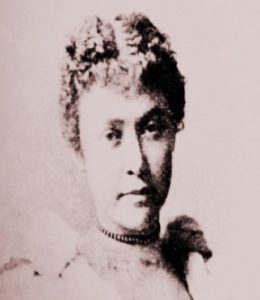 After Minnie and her sister, Holmes focused on the Colombian Exhibition. This time period was likely to be the most prolific of Holmes’ murderous career. It was said that he prowled the fair grounds looking for groups of women. He’d easily engage them in conversation, and invariably he’d end up offering them a room (for free) in the Castle. Then he’d get to know them while walking them back to the ‘hotel.’ If the women told him that they were meeting people at the Exhibition, or had relatives in the area, Holmes would put them in a normal room. However, if no one was expecting the women and they’d traveled from distant locales, they were checked into one of the ‘special’ rooms – never to check out again.

Interestingly, there was one person in Holmes’ life that was consistent – that he hadn’t exhibited any violence toward in all the years he’d known him. In fact, he was Holmes’ one steadfast companion: Benjamin Pitezel. By most accounts, Pitezel was a bit “slow” and absolutely loyal to Holmes. When the Castle partially burned (for insurance money), Pitezel was there. It seemed that he was Holmes’ only true partner in crime. Nevertheless, their insurance scams were ill-fated and the investigators had begun to sniff around…so Holmes needed to evolve again. 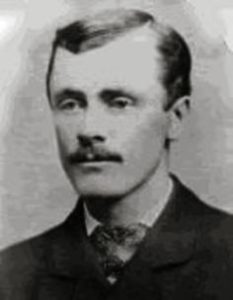 This time Holmes courted and took a new wife named Georgiana Yolk. He told her his name was “H.M.Howard.” Putting some distance between himself and the Castle, Holmes and Georgiana moved all over the country committing insurance fraud – usually with Ben Pitezel in tow (and with Georgiana in the dark about the shady business). Yet, try as he might,  some of Holmes’ scams still caught up with him and he did a short stint in jail.

Ever plotting, this is when Holmes came up with yet another plan. He entrusted his cellmate, Marion Hedgepeth with the sinister idea and asked him if he knew a crooked lawyer.

Together they would fake Ben Pitezel’s death for the insurance money. 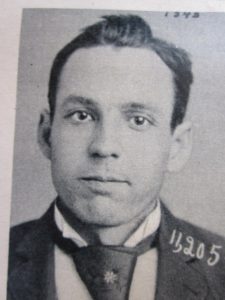 Ben Pitezel sent for his wife, Carrie, and their children. He told them about the con that he and Holmes were planning to commit. Assured of his safety, Pitezel told his family that he’d have to “hide out” for a bit while Holmes found a substitute corpse. Holmes would then disfigure it, Pitezel’s wife Carrie would identify the body, and the insurance adjusters would release the money ($10,000). While she was nervous, Carrie agreed to go along with the plan. 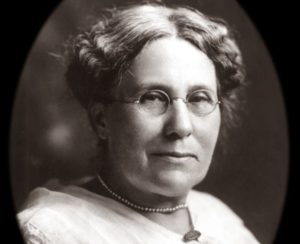 The only problem was that Holmes had no intention of finding a substitute corpse. He needed the insurance money and the adjusters were on to him. So, he killed Ben Pitezel instead. Then he separated Carrie and her children (taking the kids with him) in order to cause confusion and prevent Carrie from going to the police. She never saw any of her kids again.

In theory, Holmes would’ve gotten away with this last terrible crime… if hadn’t gotten cheap. He’d promised some of the insurance proceeds to the lawyer ($2500) and gave some to Carrie (several hundred). He’d promised $500 to Marion Hedgepeth (his ex-cellmate), but figured he’d keep that for himself instead.

It proved to be Holmes’ undoing.  Hedgepeth – himself a thief – wrote a letter to investigators and Holmes was finally apprehended.

Holmes, the sinister master-fiend was taken down by a petty criminal because he hadn’t kept his word… perhaps a fitting end, don’t you think? 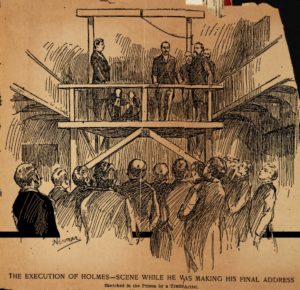 A Times Sketch of Holmes’ Hanging

Nature vs. Nurture – Is there such a thing as a “bad seed?”