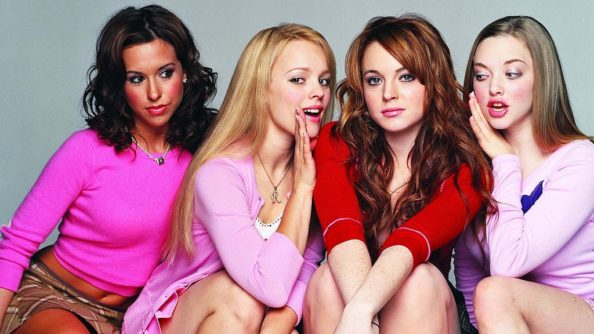 In the wave of recent events with a Playmate of the Year publicly body-shaming an unsuspecting woman, I’ve been acutely reminded of how quickly bullying, especially cyber bullying, can cross the criminal line – how “innocently” a person can go from an insecure heckler to a felon. In this day and age, it’s an even grayer area, whose boundaries most of us can blur in a heartbeat with the tools of technology.

In a time where social media is king, it’s incredibly easy to point a finger and laugh – especially when most of us sit chained to a desk, staring at a monitor all day. It’s a break in the humdrum; a release of the tension of the stress our society feeds on. It’s a moment where we get to sit back, breathe, and revel in the misery of others. Some of us do it privately, sneaking a look at the most recent trending story and snickering into our coffees. Others of us do it more publicly, taking to Twitter, Snapchat, or Facebook to share the latest gossip about a celebrity who looks perfect on the red carpet, but can’t fight his way out of a wet paper bag in real life.

And, honestly, there is nothing wrong with this.

Other mental health experts may disagree with me, but I’ve yet to meet one who is a saint themselves.  Let’s face it: it’s basic human nature to try to bolster ourselves up every now and then by comparing ourselves to others who may be having an unfortunate moment.  When we look at the tabloids in the super market, it’s a reminder that those beacons of shining perfection that we see on screen aren’t so perfect after all.  This is all good and fine, in it’s way, because celebrities have put themselves out there for public consumption. It’s their job. In fact, they have helped craft the flawless persona that we see splashed across magazine covers and ads. Thus, they’re also a target for some ridicule.  It doesn’t make the slander/libel right (paparazzi should be banned from everyplace on planet earth!) yet it’s somewhat understandable…the “Have-Nots” have always made fun of the “Haves.”

BUT – when this judgment and ridicule extends to the unsuspecting, regular, everyday citizen?  When it’s proclaimed from the rooftops in a public forum for thousands (or millions) to see? That’s cyber bullying and seems decidedly different.

For example, when 15-year-old Tovanna Holton’s “friends” took Snapchat video of her in the shower and posted it (June of 2016). The teens allegedly used the images to bully and shame Tovanna in front of “everyone at school” (not to mention the rest of Snapchat’s users). When Tovanna learned of it, she came home, found her mother’s handgun, locked herself in the family bathroom and shot herself.

When Tyler Clementi’s roommate rigged a webcam to spy on Clementi kissing another man in the privacy of his dorm room and posted it on Twitter (September, 2010), Clementi made his way to the nearby George Washington Bridge. He then leaped over 600 feet to his death in the waters below.

These cases feel different than the typical celebrity gossip rags because they focus on two non-celebrity people in positions of extreme vulnerability. In both Tovanna Holton and Tyler Clementi’s cases, they had every expectation of privacy. Tovanna was naked in a shower, and Tyler was in his dorm room – his home. They were not paparazzi shots taken on the street. They weren’t crew members snapping a pic on set. They were unsuspecting people who had no idea their most private moments were being captured and broadcast. They were violated in the most personal and malicious of ways. The images were taken surreptitiously, and done so only to harm, the very definition of cyber bullying.

This, of course, is immoral. It’s unethical. And, if you ask me, it’s just downright evil.  While I understand bullying in an academic sense, it’s not something that I understand from a personal perspective. I’ve simply never been able to put myself in a bully’s shoes.  The reason for this, I think, is because I was mercilessly bullied throughout grade school and junior high. I had very few friends, and those I did have were bullied too. In fact, if the internet had existed while I was growing up, I may not have made it.

I shudder to think about what it would have been like if those bullies had had access to me day and night via the web… So, when the Internet took a very ugly turn recently, I felt it more than usual.

For those of you who may not already know, in July Playboy’s Playmate of the Year posted this to her Snapchat: 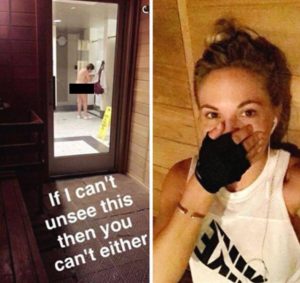 That’s right. A celebrity took a photo of an unsuspecting older woman at her gym as she readied for the shower, captioned it, and posted it to her followers… all one million of them. She used her considerable social gravitas to shame an average citizen for everyone’s amusement.

This marks the first time (in my memory) that a famous individual has used their clout to publicly bully a member of John Q Public. Honestly, I can’t even imagine what the victim must be feeling, but let’s suffice it to say that the emotions could be stronger than my childhood, Tovanna Holton’s and Tyler Clementi’s combined.  Dani Mathers used her loudspeaker of a social platform to proclaim her disdain to the world – a world that was listening and following.

It probably goes without saying that what all of the perpetrators did in these cases is illegal. Specifically it violates the Video Voyeurism Prevention Act, which prohibits: “knowingly videotaping, photographing, filming, recording by any means, or broadcasting an image of a private area of an individual, without that individual’s consent, under circumstances in which that individual has a reasonable expectation of privacy.” It is punishable by fines of up to $100,000 and/or up to a year in prison. 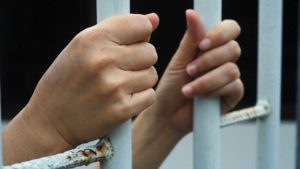 But it isn’t necessarily that detail that’s the most salient for me in all this.

It’s the fact that a terrifying line was crossed wherein a bona fide star found it acceptable to mock an average person who was just living their life. There was no realization in Dani Mathers’ mind that with great success comes great responsibility. And, in that way, I strongly feel that no punishment is too harsh.

Tovanna Holton and Tyler Clementi never got their justice (not real justice, anyway). They lost their lives due to the public humiliation they should never have had to endure.

This should be our wake-up call where we stand up and demand that something be done – that a message be sent!

After all, if Dani Mathers proved anything this week, it’s that no one is safe from cyber bullying.

Not even you, sitting at your computer right now…