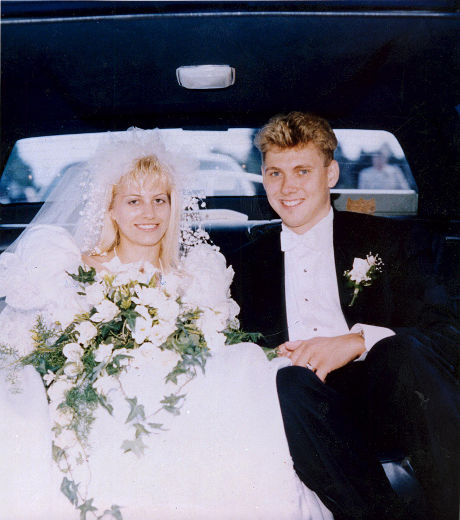 Bernardo and Homolka were made for each other. In fact, looking at photos of them, one might be tempted to call them “Ken and Barbie.” In their wedding photos, Karla Homolka’s perfect blond hair and almost lazy-happy eyes speak to the fact that she’s truly found her soulmate. Paul Bernardo looks almost as ebullient, holding her close and grinning in the back of a limo… all of this knowing that shortly before their nuptials, the couple had raped and murdered Karla’s little sister, and videotaped the entire thing.

The couple met in 1987 in Toronto, Canada. Paul had just graduated from the University and was working as an accountant with Price Waterhouse. Homolka worked in a veterinary clinic.  By 1990, they were engaged and planning to marry the following year.

There was just one tiny wrinkle in their relationship: Karla was not a virgin.

Paul was adamant that he wanted to marry a virgin. But Karla knew what she wanted, so she agreed to “make up for it” by subjecting herself to increasingly sadistic sex with Bernardo. In fact, Paul Bernardo had a bit of a reputation. He’d actually been questioned by police regarding a string of rapes that had occurred in prior years near his hometown and DNA was taken – but nothing had come of it. Yet, Karla was unfazed. She was willing to do whatever it took to keep Paul by her side; up to, and including, being his “sex slave.”

Now, you’d think that most men might be pretty happy with this arrangement – but not Bernardo.  He decided that since he simply wasn’t able to take Karla’s virginity, that he’d be happy with taking her 15-year-old sister’s virginity instead.

Far from being upset by this, Karla Homolka agreed and told him that she’d ready her sister as a “Christmas Present.”

So on the evening of December 23rd 1990, Karla approached her sister, Tammy Lyn, with a celebratory drink – spiked with Halcion (a powerful veterinary sedative). Tammy Lyn was quickly knocked out, and Karla proceeded to videotape while Paul Bernardo viciously raped the unconscious teen. Then, after he finished, Karla herself raped her own sister while holding a rag soaked in halothane over Tammy Lyn’s face. The goal was to take Tammy Lyn’s virginity without her even knowing (while their parents slept in the bedroom upstairs). But, at some point during the ordeal, Tammy Lyn vomited due to the combination of caustic chemicals and alcohol in her body, she aspirated, and died.

Bernardo and Homolka cleaned up, and called an ambulance in the morning.  Astonishingly, the Homolka family – and the medical examiner! – thought it to be a “tragic accident” caused by drinking too much and choking on her own vomit.

Later that year, the lovebirds moved to Port Dalhousie, on the other side of Lake Ontario from Toronto. Bernardo quit his job with Price Waterhouse to concentrate on smuggling cigarettes into the United States. Interestingly, a string of unsolved rapes soon popped up in St. Catherines – a town neighboring Port Dalhousie. Additionally, Paul was again becoming restless. So on the night of June 15th, 1991, he found and kidnapped a 14-year-old girl named  Leslie Mahaffy (who’d been accidentally locked out of her house by her parents). He brought her home to Karla, and they repeatedly raped the young girl. The next day they killed her and cut up her body with a power saw. Lastly, they encased her remains in concrete blocks and dumped them in Lake Gibson.

Two weeks later, a couple out canoeing found the concrete blocks, and reported it to police. The very same day, in a lavish ceremony in Niagara Falls, Bernardo and Homolka were married. The newlyweds spent their honeymoon in Hawaii – where another string of unsolved rapes occurred. 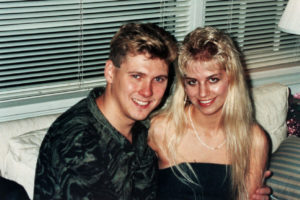 The following year, in April of 1992, Karla Homolka approached 14-year-old Kirsten French in a Catholic church parking lot and asked her for directions while Bernardo snuck up behind her and abducted her.  They took her home with them and raped/tortured her for two straight days.  Her body was found dumped in a ditch.

At last, in January of 1993, their rock solid alliance crumbled when Paul Bernardo went after his wife with a screwdriver.

Homolka went to live with her surviving sister, and Paul was released on bail…shortly. You see, the DNA tests that were submitted two years earlier had finally yielded results – proving that he was the rapist in all of the unsolved cases. Since the police now suspected Bernardo of the murders too, they approached Homolka. Police knew that she’d make a good witness against Bernardo – but didn’t really suspect that she was an accomplice. They offered her a plea deal of 12-years-flat.

Only later did the videotapes surface showing Holmolka’s full (and very eager) participation in the rapes and murders.

The Canadian Press – outraged by the police’s bungling, called the plea bargain with Homolka, “The Deal with the Devil.”

The relationship between Bernardo and Homolka certainly qualifies as a “Deadly Duo.”  t’s tempting to say that neither one of them would’ve gone on to commit crimes, if they hadn’t found each other… that their particular pathologies ignited into a heinous conflagration when they met. And, in some pairs, that may be correct.   But, contrary to what some believe about Bernardo and Homolka, this just isn’t the case.

Let’s not forget, Paul Bernardo was an unrepentant serial rapist by the time he got together with Karla Homolka. There was a string of unsolved sexual assaults in his wake (which continued throughout his relationship and marriage to Homolka). Additionally, Bernardo began making demands and putting conditions on the relationship almost as soon as his and Karla’s first date! Bernardo was specific in the type of sex he wanted – and when – with Homolka. He then made it clear that he wouldn’t marry her because she wasn’t a virgin.

Perhaps Karla Homolka’s most tragic mistake was that she didn’t break up with him right then and there.

In fact, when Paul Bernardo was later subjected to psychological testing, it was found that he garnered a score of 30-35 out of 40 on the Psychopathy Checklist-Revised (PCL-R)…and that’s a very high score.  It’s so rare that I’ve rarely seen it in my own forensic practice, even though I’ve done/supervised literally thousands of PCL-Rs on as many criminals. It was so notable that the creator of the PCL-R (Dr. Robert Hare), once stated about Bernardo, “[He] was a cold-blooded predator lacking in remorse. He is a perfect example of a psychopath (Kaihla & Wood, 1996).”

But if Paul Bernardo’s pathology was one of a cruel, manipulative psychopath, Karla Homolka’s pathology was of a decidedly different –  and much more complicated – type. Many of her doctors (all male, I might add), seemed to say that Homolka had a “learned helplessness” in her relationship with abusive spouse, Bernardo. They painted her as endlessly people-pleasing and scared of him, to the point of complying with all of his wishes. But this explanation rings frightfully hollow when compared to the facts of the crimes. Would a terrified woman relentlessly pursue Bernardo, and then offer up her young sister as a “prize” just so he would agree to marry her? Would a battered wife lure in young victims only to participate eagerly in their rapes and tortures? Would she rape them on her own, without Bernardo – without his urging?

I don’t think so.

Karla Homolka wasn’t “people-pleasing.”  She wasn’t “helpless.” Homolka was intrigued by sexual violence. Far from being put off by Bernardo’s having been questioned in the rape cases, Homolka merely seemed more keen to make him “hers.” Homolka also evidenced a disturbing propensity to seek romantic attachment as a way to characterize herself. It seemed that, without a partner, Homolka ceased to exist.  She was willing to hang onto a romantic relationship no matter what the cost. This pattern was repeated when Homolka got to prison and began a romantic relationship with a female inmate named Lynda Veronneau (convicted of Robbery).

She clung to this relationship until a more compelling one came along – a penpal relationship with a male convicted murderer that Homolka crossed paths with in jail.  Thus, it seemed that Karla Homolka was fast on her way toward personal destruction once more, aligning herself with those on the dangerous fringe of society…and yet…

After Karla Homolka paroled, she quickly reinvented herself through a romantic relationship once again. But this time she married her lawyer’s brother (Thierry Bordelais), and gave birth to their two sons and a daughter. They (reportedly) currently live in a small town in Quebec, and Homolka has had no further contact with the law.

So was Homolka the devil, or was she just all-too-happy to associate with him in order to define herself?