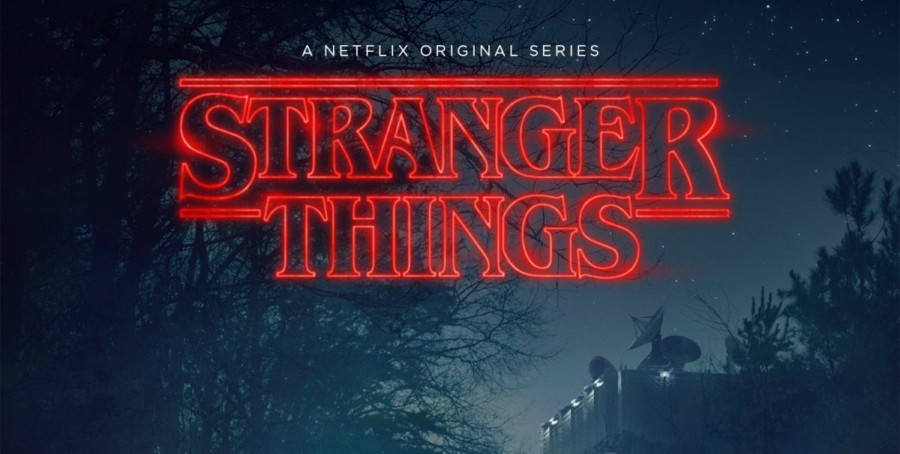 If you were looking for something new and yet oddly familiar to watch on TV this summer, Netflix’s original series Stranger Things should have been on your agenda. The series’ debuted all of the first season’s eight episodes on July 15, 2016, and they are available now for your binge watching delight.

Combining familiar tropes from E.T. the Extra Terrestrial, Lost, and Twin Peaks, showrunners Matt and Ross Duffer have made certain that Stranger Things also cuts its own unique path through the dark and stormy night of the mind, revealing and concealing things alternately to delight, confuse, and scare the crap out of the viewer. 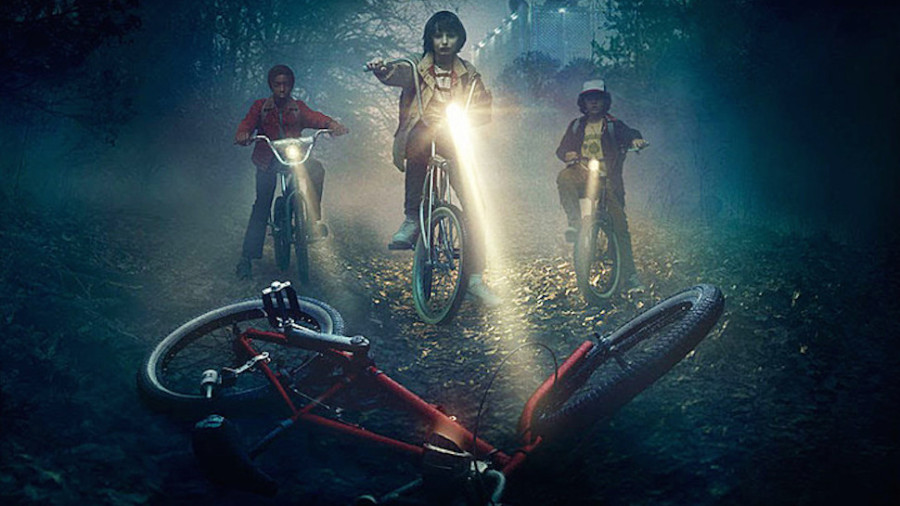 The story drops us in the 1980s small town of Hawkins, Indiana, which is like a postcard to the Cheers theme song – everyone knows your name and then some. Here young friends Mike (Finn Wolfhard), Dustin (Gaten Matazzaro), Caleb (Lucas McLaughlin), and Will (Noah Schnapp) play Dungeons and Dragons in Mike’s basement even on a school night. Their close friendship is quickly established, but Mike’s mother (Cara Buono) breaks up the proceedings because it is getting late.

The other boys leave Mike’s house on their bikes (I was hoping one of them would have a basket on it like Elliot’s in E.T.), but it quickly becomes that dark and stormy night and Will separates from the others and finds himself stuck in a scary situation in the woods not far from home. 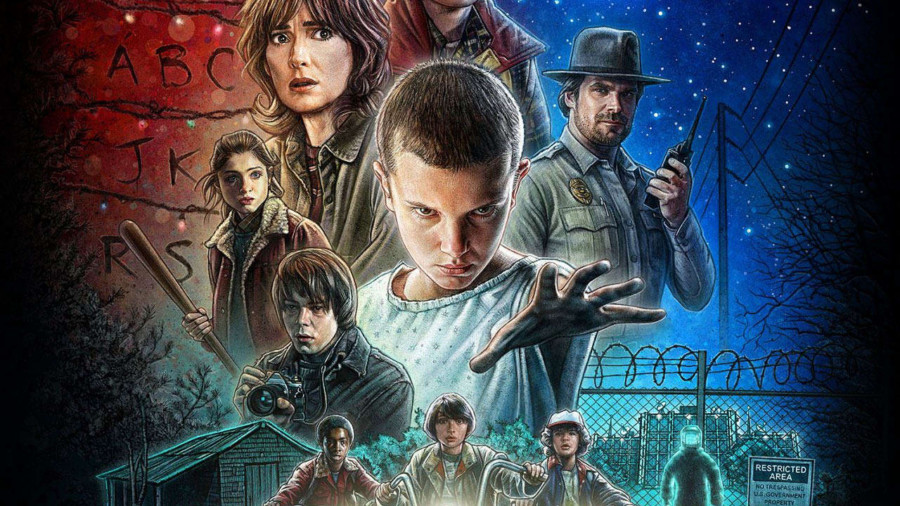 The next day Will’s mother Joyce (Winona Ryder in her best performance in years) and his older brother Jonathan (Charlie Heaton) discover that Will never came home the night before. This causes the hysterical Joyce to go to the police, where she has to beg the hungover and weary Chief Jim Hopper (David Harbour) to help her find her missing son.

This is the basic premise of the series – taking us on a search for the missing Will Byers (becoming an obsession akin to the Laura Palmer mystery in Twin Peaks). Along the way we encounter many quirky characters in this small town, including the boys’ geeky but earnest science teacher Mr. Clarke (Randall P. Havens). 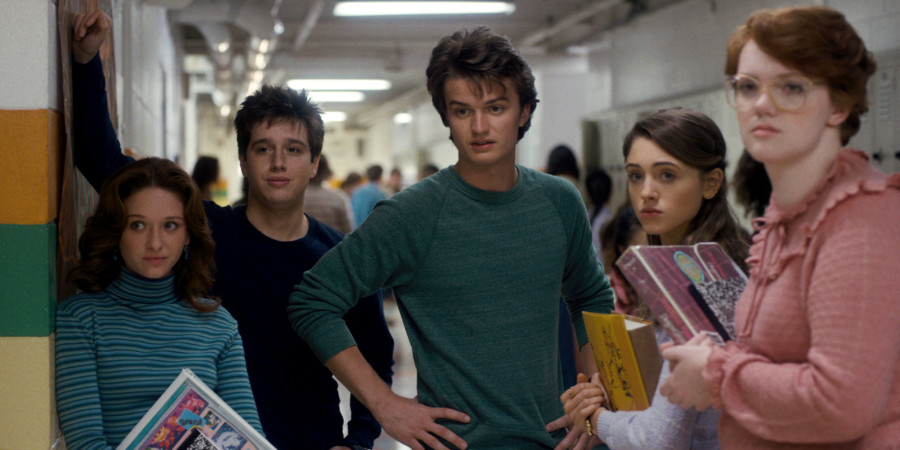 As search parties comb the woods for Will, we get what at first seems to be an unconnected story of a young girl known as 11 (a fantastic Milly Bobby Brown) who runs around with a shaved head in a hospital gown with the number 11 tattooed on her left arm. This girl who barely speaks encounters the boys in the rainy woods, and soon she is being hidden in Mike’s basement because some very bad people are after her.

Those bad people seem to be government agents and scientists who are searching the woods, Will’s house (where they find a strange substance in the garage), and other locations. Led by the sinister looking Dr. Martin Brenner (Matthew Modine), it appears that they are not only after 11 but also on the trail of whatever took Will and apparently other people. 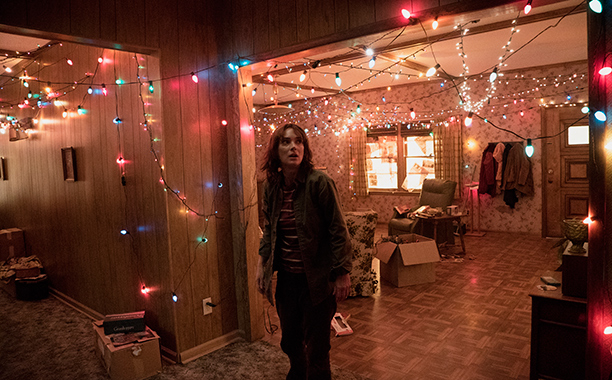 It is difficult to go any further as to not reveal spoilers, but there are many little delightful and scary twists and turns throughout. There is also a most annoying subplot involving Mike’s teenage sister Nancy (Natalie Dyer) and her hot in the pants suitor Steve (Joe Keery) that is only notable because the much better for her Jonathan likes her too and they figure into the main storyline in later episodes. The intimate scenes between Nancy and Steve are cringe worthy when you’re watching the show with a 7 year old boy who wants to know “Why are they kissing like that?”

Overall, Stranger Things is gloomy, bright, inventive, and draws the viewer in and won’t let go. It invokes elements of some our favorite 80s films (when Mike shows 11 his Star Wars toys I couldn’t help thinking of Elliot doing the same thing with E.T.) and, while the 80s seem now to be a more innocent and idyll era, it also was a time that Jason Voorhees, Freddy Kruger, and Michael Myers reigned supreme in the eerie forests and dark suburban alleys of our worst nightmares, so all was not well either.

The extremely good news is that a second season of Stranger Things is forthcoming in the summer 2017 (thank you, Netflix), so you do have time to catch up on all the weird happenings in Hawkins, Indiana well before then.

It is highly recommended not to watch this show alone, and you must be warned, once you watch episode one you will be unable to resist heading right into the subsequent episodes. One thing is for certain – after Stranger Things, binge watching will never be the same!