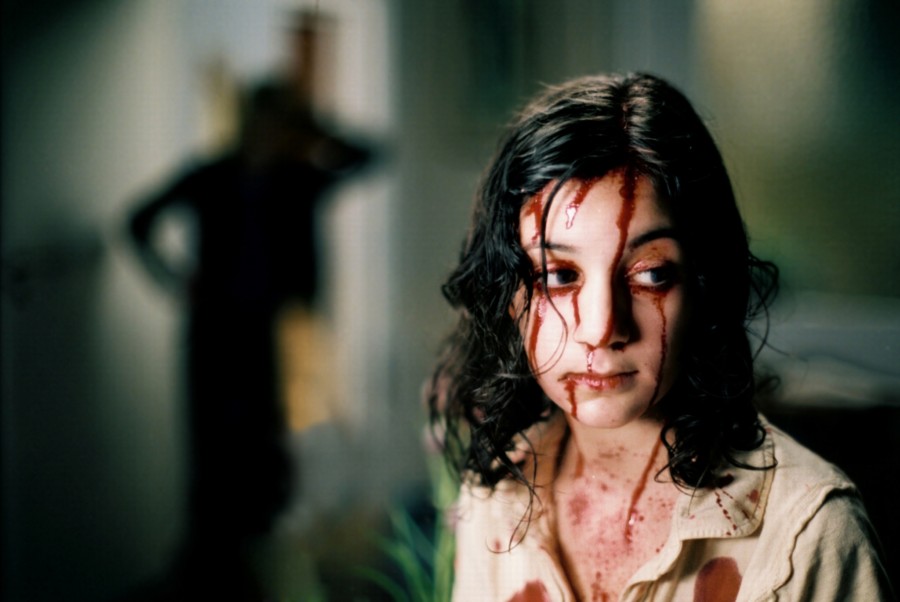 The horror genre serves up all kinds of scares. There are silly spooktastics like Drag Me to Hell and Tucker and Dale vs. Evil; pitch-black laugh riots like Attack the Block and Shaun of the Dead; and twisted mind-benders like The Cabin in the Woods and Pan’s Labyrinth. Each one is a killer flick. But this list is reserved for those scary movies that still haunt our dreams years after we’ve seen them. From killer kiddie vampires and spooky estates to undead ghouls and forests of pure evil, here are the best scary movies of the last quarter century. Sleep tight.

Still from Let the Right One In via Magnet Releasing

Children are creepy. Especially when their instincts are to bite into your jugular and suck out the blood. Tomas Alfredson’s Swedish gem centers on Oskar, a bullied loner who befriends a porcelain-faced vampire named Eli. Their budding friendship is a beautiful thing—albeit a gory one.

In 1994, this haunting little indie hit the silver screen and horror was never the same. Not only did the film’s “is-this-real?” PR hoax heavily impact today’s viral marketing model, it also triggered a wave of found-footage movies and proved that all one needs to make a killer horror flick is a handheld camera and a great idea. Our camping gear has collected dust ever since.

Still from I Saw the Devil via Magnet Releasing

Anyone who doesn’t consider Kim Jee-woon’s unflinching vision of vengeance a horror flick should just watch this. About a man out to avenge the murder of his wife, I Saw the Devil is a brutal watch. If ever there were a director who deserved the top honor for Best Revenge Flick—currently held by Park Chan-wook for Oldboy, of course—it’s this guy.

Still from The Strangers via Rogue Pictures

Liv Tyler and Scott Speedman star in one of the most terrifying films of 2008, and it doesn’t use a booming score or a ton of gore to achieve its goal. Rather, as the on-screen couple fights for their lives against a group of masked peeping toms, writer/director Bryan Bertino utilizes the sound of silence to scare the living daylights out of us. It’s highly effective.

Still from You’re Next via Lions Gate Films

This subgenre trailblazer about a dinner party from hell has a lot going for it. The cast, which includes indie film frequenters Joe Swanberg and Amy Seimetz, is on point; Simon Barrett’s story takes a killer feministic turn midway through; and mumblegore director Adam Wingard merges a home invasion nail-biter with the dysfunctional family drama to thrilling effect.

Oren Peli’s paralyzing directorial debut introduced audiences to a new way of consuming supernatural movies. Through a series of security cams and handhelds, we’re invited to spy on the doomed horror stars and once and for all find out what happens when the lights go out. Now we wish we didn’t know.

Still from The Babadook via Causeway Films

Leave your gimmicks at the door, please. Good old-fashioned scares propelled director Jennifer Kent to icon status with her dark Aussie fairy tale. About a mother, her son, and the monster that lives in his closet, The Babadook was an insta-classic when it premiered at Sundance in 2014. And to think, this is just Kent’s debut.

We’re not saying Danny Boyle invented the breakneck-speed zombie. But we are saying his cardio-inclined ragers win when it comes to scaring us out of our seats. With an atmospheric setting, crazy visuals, and a supreme score courtesy of John Murphy, 28 Days Later is an apocalyptic gem in a saturated subgenre. Making it to the closing credits is a workout in itself.

Google “most disturbing films of all time,” and odds are Takashi Miike’s 1999 atmospheric mail-order bride horror makes an appearance. And for good reason. About a widowed filmmaker who handpicks his wife from a lineup of leading lovelies, the tale quickly flips from wedded bliss to visceral nightmare complete with needles and piano wire.

Still from The Witch

Still from The Descent via Lionsgate Films

Writer/director Neil Marshall traps a group of spelunkers in an underground cave and then drops a bunch of rocks on them while launching a herd of subterranean humanoids at them. We had to take a few five-minute breathers during this one—usually in a wide-open, brightly lit space. And that is how you know you’re watching a premier horror picture.

British director Ben Wheatley helms this marital drama-meets-crime thriller-meets-occult horror. Kill List tells the tale of a British soldier who attempts to re-enter the contract killing business, only to discover the dark world around him is more sinister than he imagined.

Still from Scream via Dimension Films

Wes Craven is a master of teen scream films, and this one starring Neve Campbell as a high schooler on the run from the ghost-faced murderer of her mother just may be our favorite. Thanks to writer Kevin Williamson’s cleverly self-aware screenplay, and to the movie’s terrifying 13-minute opener, Scream still sends shivers down our spine.

Black Swan is a transcendent head-trip that spirals around a ballerina on the brink of breakdown. In the words of the film’s cracked protagonist Nina Sayers, “It was perfect.” Or in our words, “pretty damn close.”

Still from It Follows via Northern Lights Films

Yes, It Follows has been talked about to death. But it’s hard to find fault with David Robert Mitchell’s modern cautionary tale about the horrors of sexual encounters—from its perfect scream queen in Maika Monroe to its wicked synth-heavy Disasterpeace soundtrack.

16. Silence of the Lambs

Still from Silence of the Lambs via Orion Pictures

Still from The Ring via DreamWorks

We can thank director Gore Verbinski for helping J-horror cross the Pacific; his remake of Hideo Nakata’s Ringu is the first to translate the subgenre for American audiences. About a journalist investigating the sinister origins of a cursed videotape, it’s one of those we still have trouble getting through without hitting pause.

David Fincher has a dark side, and it shines in this disturbing horror crime thriller. Seven follows a pair of detectives as they track down a sicko murdering urbanites living in sin, and culminates in one of the most horrific scenes ever shot. All we have to say is “What’s in the box?”

Producer Guillermo del Toro and director J. A. Bayona’s El Orfanato is a Spanish Gothic horror that, at first blush, looks familiar. But with a nuanced approach and a standout performance from lead actress Belén Rueda, the filmmakers have crafted an eerily atmospheric masterpiece about a mother who plays hide-and-seek with child ghosts in hopes of finding her missing son.

Still from The Others via Cruise/Wagner Productions and Dimension Films

In his first English-language film, Alejandro Amenabar puts Nicole Kidman in a haunted country house on an island in the English Channel and then sends a wave of chills down our spine. The Others is about a widow, her sickly children, and the troubled souls roaming through their sprawling mansion. It’s also a ghost story that doubles as a portrait of grief, and possesses one twist ending tease that still satisfies all these years later.

The Witch: The Movie That Terrified Stephen King