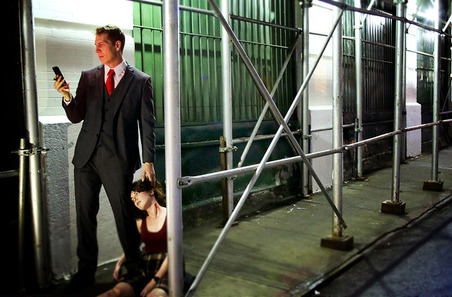 Whether this new stage adaptation of Bram Stoker’s Dracula will be your cup of blood – er, tea – might depend on your willingness to accept a large dose of camp mingled with straight storytelling.

Devised by playwright Patricia Lynn and director Geordie Broadwater, this hybrid or mutant entertainment is told in old-style cinematic fashion, but updated story-wise to the present day, while hewing largely to the plot of the original novel. I found its curiosities just right for the Halloween season.

Count Dracula himself appears seldom. Tom Schwans brings the first campy element as the vampire’s first incarnation: long-haired, thickly accented, he reels the upright young real estate lawyer Jonathan Harker (Jordan Reeves) into his evil scheme to purchase properties in the U.S. and take over what was, at the time of the novel’s publication, still literally a fairly new country. 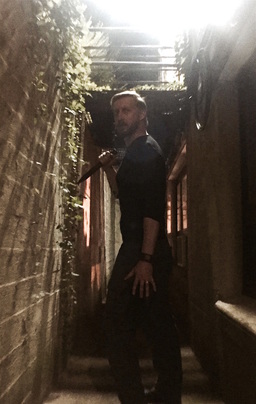 mpire doesn’t appear again until near the end, now clean-cut and accent-free thanks to Harker’s forced tutelage, and thus now truly scary rather than over-the-top freaky. In the meantime we get to know Mina, who is determined to find out what’s happened to Jonathan; her best friend Lucy (Kate Consamus), a globe-trotting social climber whose transformation into an undead fiend is the production’s most acutely entertaining strand; and Lucy’s fiancé Jack Seward (Jordan Kaplan), a medical examiner turned psychiatrist.

Seward’s new patient Renfield is the show’s biggest camp element. Played to the hilt by Lauren Lubow, this frustrated minion of the Master is a creepy-funny cross between an evil Garbo and a shrunken Lady Gaga. While her importance to the plot takes a while to become clear, she’s a garishly entertaining creation (except for when her lines get lost in her over-the-top accent). The phrase “chewing the scenery” takes on surprising new meaning as Renfield grows more and more desperate to join the ranks of Dracula’s undead.

Familiarity with the plot of the novel will help in following the story’s twists, but the script and the direction do a good job of keeping us engaged between surprises and revelations. Quick pacing, short fast-changing scenes, and clever, cinematic staging help keep things interesting. (Example: look out for a “ceiling shot” of Renfield in her hospital bed.)

We don’t come to care a whole lot about these characters, with the partial exception of Mina. In one nod to modern sensibilities, she inches toward the possibility of becoming the heroine; in another, near its end the story touches on the power structure of male-female relationships. But sympathetic characters aren’t usually the point of old-fashioned horror stories, and though it’s filled with smartphones and laptops, this ghoulish tale retains a 19th-century ring. To its benefit.