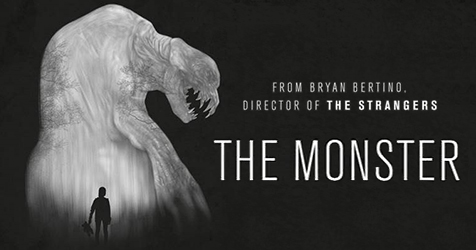 Two films coming out this fall have the word monster in the title. Coincidentally, they both also deal with child/parent relationships. While one is a big studio effort, The Monster, is an entirely different beast. Writer/director Bryan Bertino’s film is a stripped down creature feature filled with practical effects and strong female performances. Zoe Kazan and Ella Ballentine play off each other fantastically, even if their characters may hate each other for most of the runtime. While I may have despised Bertino’s breakout feature — 2008’s unintentionally hilarious borefest The Strangers — there’s plenty to love for horror fans and they even have the opportunity to choose between a darkened theater or at home via DirecTV.

The Monster is as straightforward and minimalist as they come. Kathy (Kazan) has an estranged relationship with her daughter Lizzy (Ballentine) thanks to her alcoholism. But fate makes the two put their strengths to the ultimate test after Kathy hits something while driving. With a surprisingly working cell phone, Kathy makes Lizzy call for help. Now, they get to sit stranded in the middle of the road, in the rain, while a monster lurks in the woods. Kathy and Lizzy are in for the night from hell as they battle not just a ruthless killing machine, but each other as well.

Leave it to Kazan to make even a horrible mother likeable. I’m sure that’s how she scored the lead because it takes a lot of skill to make that possible. Not even Emily Blunt was able to pull that off in The Girl on the Train — although, her character is far different from Kazan’s. A horror movie always needs characters to root for. Especially when there’s only two key players. When you’re in every scene, you can’t have the audience hoping you bite the big one. There wouldn’t be any reason to watch, unless they were to go out in spectacular fashion by the end. As it is, Bertino keeps things reasonably tight — even if the film’s 91 minutes start to feel padded out. Thankfully by the end, we’re treated to enough shock tactics and practical effects to keep us riveted through the finale.

The Monster may not be a new horror classic, but it does harken back to a more simpler time for horror movies that don’t rely on a pretty cast of dead teenagers walking. The creature is never a product of a computer which makes it a far more frightening entity. It may be seen in the light a few too many times, keeping your imagination from having to do the heavy lifting, but it could have been trimmed in that aspect a bit too. Sometimes what you don’t see is scarier. However, anyone interested in The Monster will likely have a good time. It’s a way better entry than Lights Out, and many will find what’s lurking in these woods scarier than the Blair Witch. It may not be an instant classic, but it gets the job done.