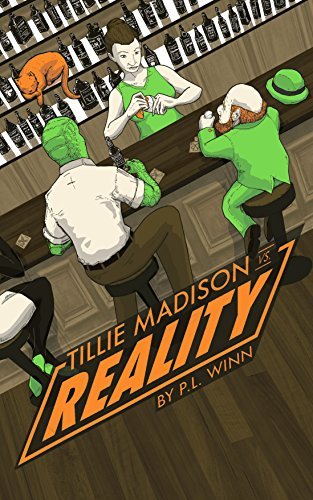 Talking monsters, leprechauns, multi-dimensional creatures, the Reality Defense Agency, and novelist P.L.Winn’s rollicking new TILLIE MADISON VS REALITY on After Hours AM/America’s Most Haunted Radio – Thursdays 9-11pE with hosts Joel Sturgis and Eric Olsen. P.L. will join us in the 10pE hour; at 9pE, Joel and Eric will review the week’s hot and freaky paranormal news and regale listeners with witty banter.

P.L. Winn’s first book, Tillie Madison vs Reality, is a glimpse into a world just slightly around the corner from this one. Magic, monsters, and minor gods are all just part of a day’s work at the Reality Defense Agency. What’s new for agent Tillie Madison is being stalked in her dreams. Now she faces something a bit bigger than a chupacabra or a drunken leprechaun, and it wants her dead. If she gives in, at least she won’t have to deal with her coworkers, or explain to her mother why she’s not currently dating anybody.

Tillie Madison has a partner whose first memory is from the 1800s, but doesn’t look old enough to drink. She’s got a boss who doesn’t seem to like her. She’s got coworkers who range from apathetic to sexist. She’s got minor gods in her Skype contact list, and is trying to figure out whether her partner’s priest knows anything useful, or if she’s just another peddler of false hope. The jury may be out for a while on that last one, but there are many more stories to be told about Tillie Madison and her life with the RDA.

Early Amazon customer reviews say, “This book has pulled me in to its world. Almost like ours, but just one step to the weird. The author’s writing subtly reminds me of people like Robert Aspirin and Douglas Adams.” Also, “This story is a well-paced, solidly-written page-turner. Compelling characters in a unique setting make for a thoroughly entertaining read.”

After a childhood spent in two countries and three states, but mostly in San Diego, P.L. now lives in Dallas, Texas. P.L. writes books and dreams of a life just slightly to the left of this one, where everything strange is somehow true. Tillie Madison vs Reality is P.L.’s first book, but work has already begun on Tillie Madison vs Luck.