Talking Parkland Shooting and Gun Violence with Maureen Washock of Moms Demand Action on After Hours AM/The Criminal Code Is this a watershed moment? 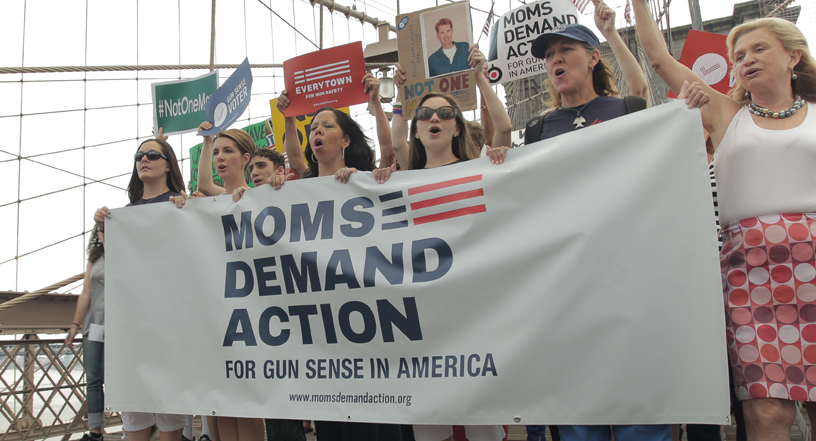 On a momentous episode of After Hours AM/The Criminal Code — True Crime 9-11pE Wednesdays with hosts Joel Sturgis, Eric Olsen, and Dr. Clarissa Cole — we talk guns, again. In the midst of a potential watershed moment — one week after 17 students and adults were killed at Marjory Stoneman Douglas High School in Parkland, Florida by a former student with an AR-15 — we welcome Maureen Washock, Ohio Volunteer Chapter Leader of Moms Demand Action For Gun Sense in America to talk about this moment in history and the organization’s efforts to bring “common-sense reforms” to our gun laws and policies. We talk with Maureen at 10pE; at 9pE Joel and Eric review the week’s True Crime headlines.

Moms Demand Action for Gun Sense in America was created to demand action from state and federal legislators, companies, and educational institutions to establish common-sense gun reforms in an effort to protect children — and all citizens — from gun violence.

Moms Demand Action was founded by stay-at-home mom Shannon Watts on December 15, 2012, in response to the devastating shooting at Sandy Hook Elementary School. The organization quickly flourished into a leading force for gun violence prevention, with chapters in all 50 states and a grassroots network of moms that has advocated for change at the local, state and national level. In December 2013, Moms Demand Action partnered with Mayors Against Illegal Guns to unite a nationwide movement of millions of Americans working together to end the epidemic of gun violence that affects every community.

Nonpartisan, Moms Demand Action supports the 2nd Amendment, but they believe common-sense solutions can help decrease the escalating epidemic of gun violence that kills children every day. Whether the gun violence happens in urban Chicago, suburban Virginia, or rural Texas, Moms Demand Action demands new and stronger gun laws and policies. Their nonpartisan grassroots movement has grown to include a chapter in every state across the country, educating, motivating, and mobilizing supporters to take action that will result in stronger laws and policies to save lives.

This is a public health crisis: seven American children or teens are shot and killed every day.

MDA believes the gun lobby has dominated the conversation about gun violence for too long. They will no longer stand by and let elected officials, corporate leaders and other influential voices turn their back on sensible gun laws and policies. They are organizing to apply pressure that will result in stronger, sensible gun laws and policies that will protect children and families.

The United States has a gun violence crisis. For every two people injured with a gun, one is killed. We must do more to keep guns out of the hands of people with dangerous histories and enact strong, commonsense gun laws, which go hand in hand with the Second Amendment

2) Myth: Federal law prohibits ALL domestic abusers from having guns.

Fact: Federal law prohibits abusers convicted of felony and misdemeanor domestic violence crimes and those subject to domestic violence restraining orders from having guns. However, federal law generally does not cover abusive dating partners. This is often called the “boyfriend loophole.” Federal law also does not cover convicted stalkers nor does it require that offenders turn in the guns they already have.

Legislation to close some of these loopholes is pending before Congress. States are also recognizing that more must be done to keep guns out of the hands of domestic abusers. Since 2012, 25 states plus the District of Columbia have strengthened their laws to keep guns away from domestic abusers.

Fact: While no single law can prevent all gun violence, research shows that strong gun laws do work. Data from states that require background checks on all handgun sales show there is 48 percent less gun trafficking in their cities. Further, evidence shows that Chicago is subject to the consequences of other states’ weak gun laws. A study found that 60 percent of guns recovered from crime scenes in Chicago came from out of state, particularly from states with weak gun laws, like Indiana and Mississippi.

Fact: According to research by Everytown for Gun Safety, when it comes to unintentional shootings by children, toddlers (ages 2 to 4) are at the greatest risk of shooting themselves with an unsecured gun. Every year, nearly 300 children age 17 and under gain access to a gun and unintentionally shoot themselves or someone else, and nearly 500 more die by suicide with a gun. Many of these deaths are entirely preventable with responsible gun storage.

Moms Demand Action for Gun Sense in America has developed the Be SMART gun safety program to help parents and other adults prevent child gun deaths and injuries. The campaign encourages parents and gun owners to follow these simple steps:

Smart adults can protect vulnerable kids by storing guns locked, unloaded and separately from ammunition, and by taking steps to ensure children never get unauthorized access to unsecured guns.

5) Myth: “Concealed Carry Reciprocity” will create a national standard for who can carry concealed guns in public.

Fact: “Concealed Carry Reciprocity” does not create a national standard for who can carry loaded, concealed guns in public. Rather, it forces states to recognize standards from every other state, making the weakest standard the law of the land, allowing criminals and other people who pose a danger to public safety to carry loaded, concealed guns across the country. Find out more about the dangers of “Concealed Carry Reciprocity” here.

Fact: Silencers actually make hunting more dangerous; widely available ear protection works better to protect hearing. It’s not public health that would benefit from the sale of silencers, but the silencer market, which is one of the fastest-growing markets in the firearm industry. Find out more about the dangers of proposed gun silencer legislation here.

7) Myth: Criminals will always find a way to get their hands on a gun.

Until 2007, Missouri required that a person pass a background check before buying a handgun. After repealing this requirement, Missouri saw a significant increase in illegal gun trafficking and a 25 percent increase in gun homicides.

Fact: There is no evidence that shooters target these areas. Everytown for Gun Safety research has shown that just 10 percent of mass shootings since 2009 have taken place in so-called “gun-free zones.” In fact, the vast majority of mass shootings—63 percent—took place entirely in private homes.

Everytown’s analysis reaffirmed that we should focus on gun violence prevention policies that address the circumstances underlying mass shootings, including:

Fact: That’s why we fight so hard to keep guns out of the hands of people with dangerous histories. We are not anti-gun, we’re pro-gun safety. We know that commonsense laws to keep people such as domestic abusers and violent criminals from having guns can save lives.