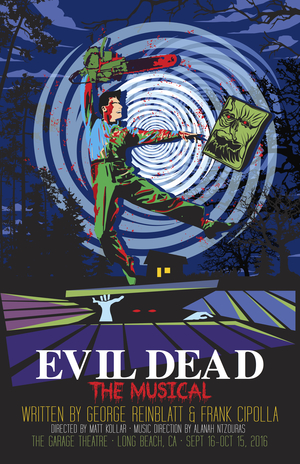 The 1980s are cool again, as evidenced by the popularity of Stranger Things. But there was something from the 1980s even stranger: the Evil Dead trilogy. The films starring Bruce Campbell as Ash (The Evil Dead, Evil Dead II, and Army of Darkness) set the bar for campy horror. Can something be stranger yet? Yes. Evil Dead The Musical.

The musical, at The Garage Theatre in the Los Angeles suburb of Long Beach, incorporated story lines from all three films into a sensitive, nuanced theatrical experience. Just kidding. It was gory, loud, and outrageous, but in a fun way. Written by George Reinblatt and Frank Cipolla and directed by Matt Kollar, Evil Dead The Musical will leave you drenched in blood (not the real stuff).

The Garage Theatre, not actually in a garage anymore but in a converted retail space, is a black box theater with great community support. It has no stage, proscenium arch, or permanent seating. The play happens around and sometimes amongst the audience. The ambiance this evoked, the story, and a remarkably talented cast created a memorable opening night. 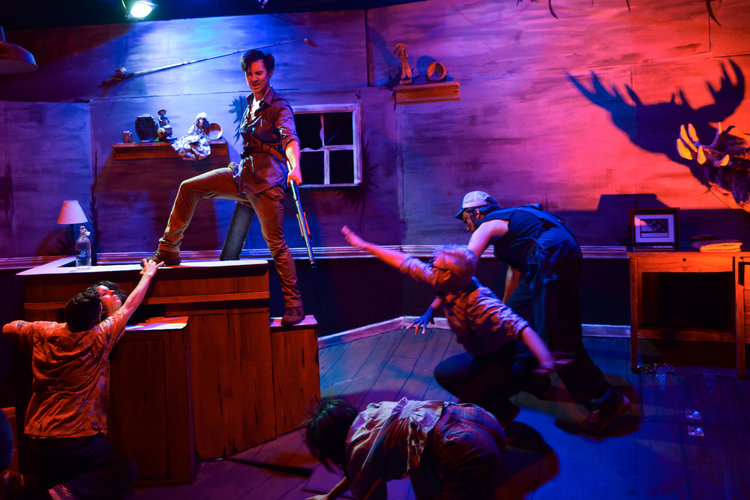 Evil Dead The Musical – The Ambiance

As the door opened for the audience to enter the theater, fog came out, followed by an evil dead character we’ll call Dead Bimbo. She teased the audience as they came to the box office, and danced on “the bridge” (the location of an important plot point).

As we waited for the play to begin, Dead Bimbo continued to spar with the audience, getting some to dance with her. She also brought around a basket of cookies and was helpful to an audience member who needed the men’s room. “Come with me,” she rasped. “I’ll show you where the poo-poo room is.” She then followed the gentleman in, emerging moments later, with a disappointed, “He kicked me out.”

As for the space itself, befitting a black box theater, its interior was painted black. There were only two rows of seats so no one was more than about 20 feet from the action, and well within blood splatter range. The musical group was off to one side, all made up as zombies. (I’m assuming they weren’t real zombies.)

The music and songs are a kind of light rock/Sondheim amalgam. As the teens drive to the cabin in the woods, pictured below, the lyrics go something like, “A cabin in the woods. We’re five college students on our way to an old abandoned cabin in the woods. What could go wrong?” My favorite song was “Look Who’s Evil Now,” sung by the formerly innocent Cheryl. The one stylistic exception is a duet between Ash and Scott which gets into a Gilbert and Sullivan light opera mode.

Although I didn’t leave humming anything, the music is fun and adds to the craziness. 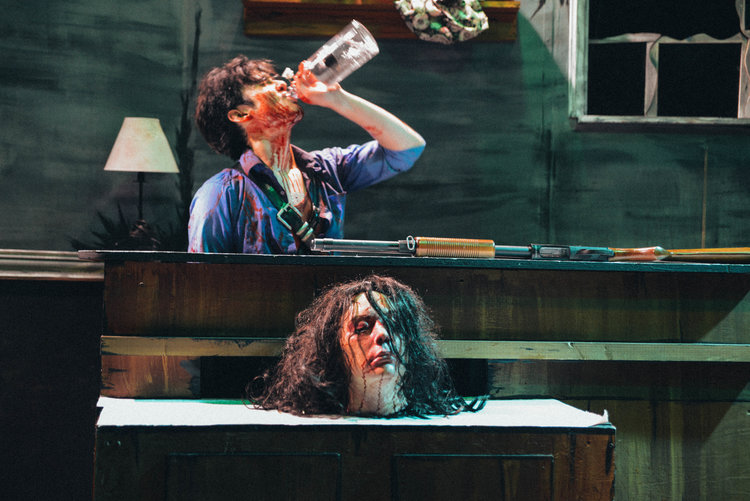 Evil Dead The Musical – The Story

You should watch the trilogy before seeing the play. I had watched Army of Darkness a few months ago and I re-watched the other two films the night before I ventured to the musical. Before the show, I started a conversation with a couple of gentlemen who had never seen an Evil Dead film. They were there because they come to see everything at The Garage. At intermission, I found myself explaining several of the jokes to them, because the humor was satirical in nature.

Amazingly, the play manages to incorporate elements of all three films into a story at least as coherent as the originals.

If you’re an Evil Dead fan, you’ll see all your favorites: the demon in the cellar, Ash’s obnoxious friend, Annie the archaeologist’s daughter, the hillbilly who lives in Michigan, and S-Mart employees. In a clever bit of stage management, S-Mart employees come out between scenes to mop up the splattered blood.

Oh, yeah, splattered blood. You are asked at the box office if you would like a poncho. I declined, and managed not to get splattered till late in the second act when Annie’s heart exploded unexpectedly. They got me. 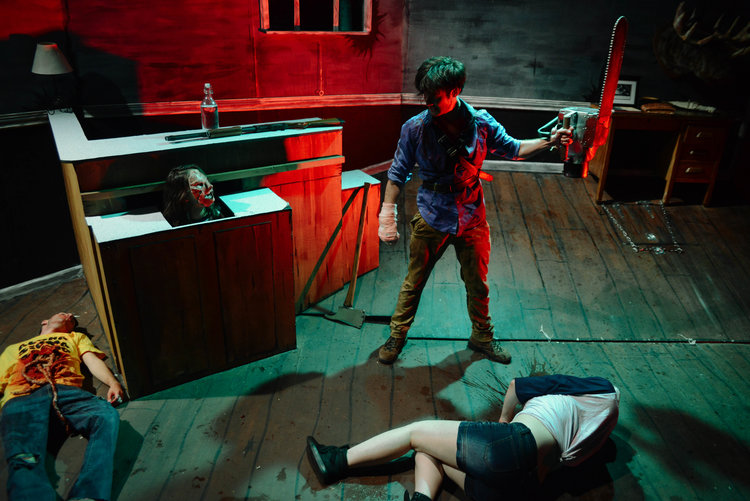 Evil Dead The Musical – The Cast

The casting of Steven G. Frankenfield as Ash is perfect. He looks almost exactly like a young Bruce Campbell and his delivery of classic lines like “Give me some sugar” is perfect.

Nori Tecoscy plays one of the college girls who arrive at the cabin in the woods at the beginning and returns later as Annie. She does such a good job that I didn’t realize it was the same actress in both parts until I noticed it in the program.

My favorite performance is offered up by Jazzy Jones as Ash’s sister Cheryl. Locked in the cellar, she keeps popping up to deliver some of the worst puns in theatrical history. (Disclaimer: I really don’t know that much about theatrical history, but the puns were really good.)

The only downside to the evening was that when singing, Jazzy’s voice was overpowered by the music. Let’s hope they work that out on future nights.

You, too, can get splattered with blood as you laugh at a head being cut in two by a chainsaw. Evil Dead The Musical runs on select dates through October 15 at The Garage Theatre, in Long Beach, California. Tickets are available online, at the box office 30 minutes prior to each night’s performance, or by calling (866) 811-4111