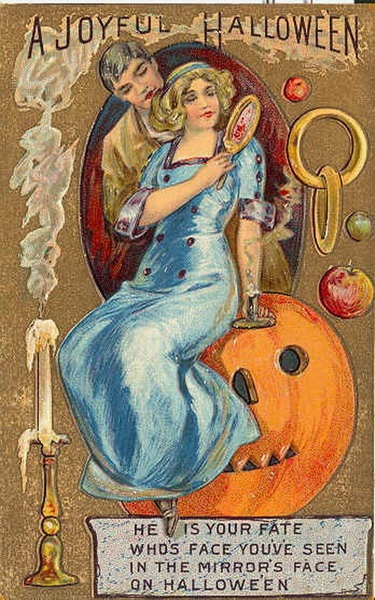 Though it’s still very summery in much of the country, with the opening of a number of haunted attractions, costumes and candy overflowing shelves in stores, and spooky programming easing onto screens big and small, the Halloween season is upon us. Amidst the noisy, colorful pop cultural extravaganza that is contemporary Halloween in America, an element central to the extended history of Halloween — all the way back to the pre-Christian Celtic celebration of Samhain — has virtually been lost: the art of divination. 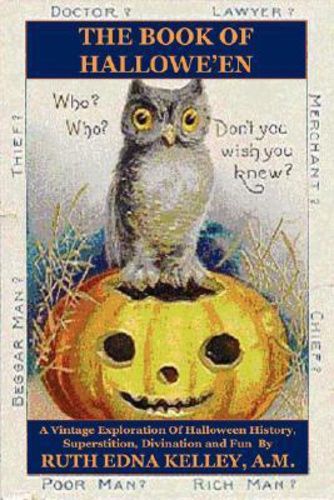 So central were rites and customs of divination — especially regarding matters of the heart — to the celebration of Halloween that the cover of The Book of Hallowe’en, Ruth Edna Kelley’s classic history of the holiday published in 1919, depicts an owl perched on a jack-o-lantern asking, “Who? Who? Don’t you wish you knew? Doctor, lawyer, merchant, chief? Rich man, poor man, beggar man, thief?” In fact, until the second half of the 20th century when Halloween became primarily a children’s costume pageant and sugar stockpiling safari through the neighborhood, celebration of Halloween was MOSTLY about games and rituals offering hints of the future, especially among unattached young people yearning for clues as to their future mates. 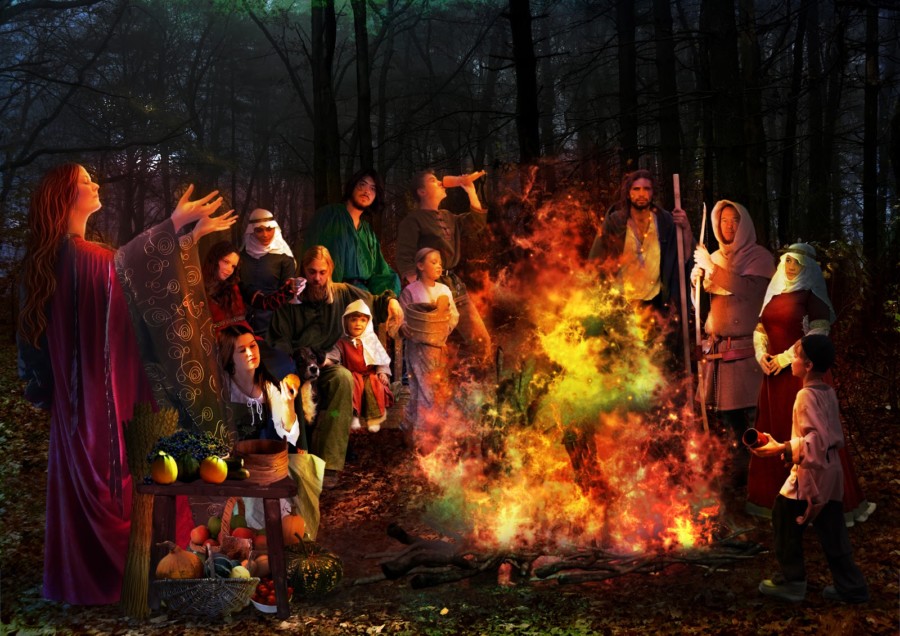 In ancient Celtic times, Samhain (“summer’s end”) was celebrated on November 1 and was considered the beginning of the new year, always a time for prognostication. The sacred fire of the old year was extinguished. A new fire was lit in the altar, sparks were passed on to light ceremonial hilltop fires. In Ireland — where perhaps the veil between worlds has always been thinnest — the altar was on the hill of Ward in Meath, where sacrifices, especially black sheep, were burned in the new fire. From the death struggles of the creatures, omens for the year ahead were gleaned. 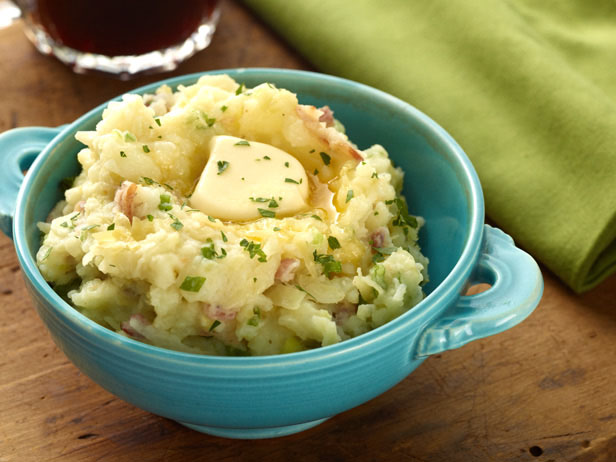 Thousands of years later, as related in Kelley’s 1919 book, an Irish Halloween divination ritual involved a meal of colcannon, mashed potatoes, parsnips, and chopped onions. A ring was buried in the colcannon and the one who found it would be married within the year, or if already married, would have particularly good luck. Also buried in the dish might be a coin (wealth), a thimble (spinsterhood), or a doll (children). A variation on the theme found a ring and a nut baked in a cake. The ring meant impending marriage, the nut indicated that its finder would marry a widow or widower. If the nut was withered, no marriage was prophesied. 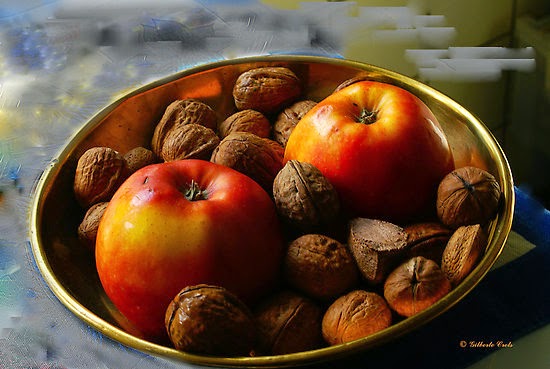 Another Irish nut test involved burning three nutshells, named for a girl and two sweethearts. If one of the sweetheart shells burns at the same rate as the girl’s, that love would be compatible with and faithful to her – not sure what they did if all three shells burned together. Or, a girl might melt lead in a spoon and pour it into cold water. The shape each blob took in the water suggested the occupation of the future husband of the girl, which was usually a very subjective undertaking.

On the male side of the soothsaying aisle, hemp seed was sown across three furrows with the sower repeating, “Hemp seed, I saw thee, hemp seed, I saw thee; and her that is to be my true love, come after me and draw thee.” Looking back over his shoulder, he might see the apparition of his future wife gathering hemp.

More elaborate still, a party of twelve could learn their fortune by gathering a clod of earth from a churchyard and setting twelve candles — one for each in the party — in the clod. The fortune of each would be like that of the candle lit in their name: steady, wavering, or soon eclipsed by darkness. If one was really committed, on Halloween one could go out “alone and unperceived” to a south-running brook, dip a shirtsleeve in it, bring it home and hang it by the fire to dry. If lucky, one might catch a glimpse of a destined mate come to turn the shirt to dry the other side before midnight. 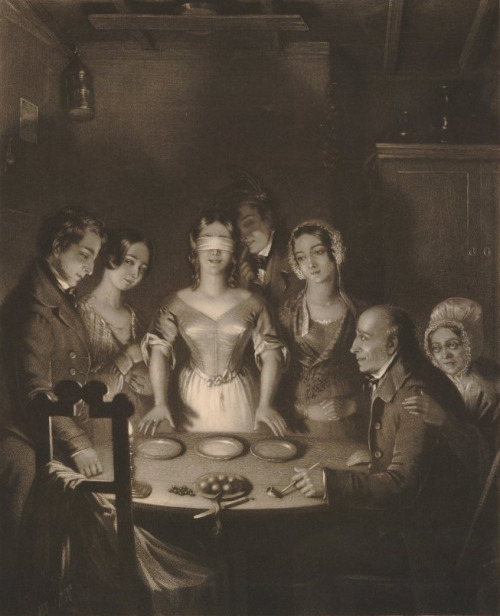 Similar prognosticating shenanigans in 18th century Scotland was described by Robert Burns.The single and unengaged went out hand in hand and blindfolded to the cabbage patch. They pulled the first stalk they came upon, brought it back to the house and were unbandaged. The size and shape of the stalk indicated the appearance of the future husband or wife. This ritual was thought to be particularly effective if the cabbage was stolen from the garden of an unmarried person, which seems like adding insult to injury.

The English, in turn, had a thing for the walnut tree:

Sometimes the stakes were even higher than marriage or good fortune. On the Isle of Man, in the Irish Sea between England and Ireland, the curious filled a thimble with salt and poured it carefully into a little pile on a plate. If the heap was found fallen over by morning, the person it represented was doomed to die within the year.

Finally we come to a vestige of Halloween divination we might actually recognize: bobbing for apples, with pursuit of the apple symbolizing the often slippery pursuit of love.

The rosy apple’s bobbing
Upon the mimic sea-
‘Tis tricksy and elusive,
And glides away from me.

One moment it is dreaming
Beneath the candle’s glare,
Then over wave and eddy
It glances here and there.

And when at last I capture
The prize with joy aglow,
I sigh, may I this sunshine
Of golden rapture know

When I essay together
In all her witchery
Love’s sweetest rosy apple
On Love’s uncertain sea.

Recall that in It’s the Great Pumpkin, Charlie Brown, first aired in 1966, the kids bob for apples at their Halloween party. 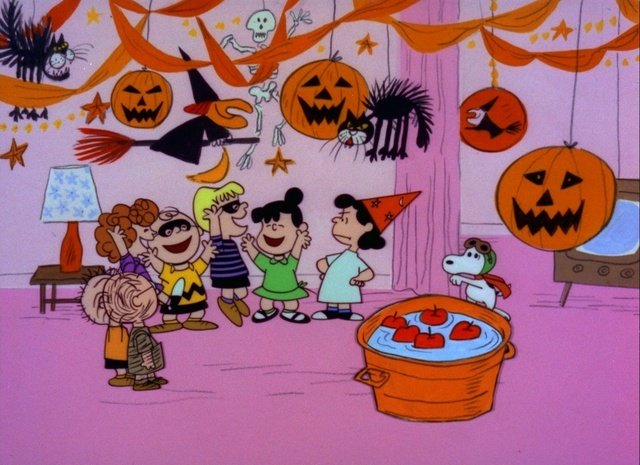 Apple seeds were used in yet another test: a pair of seeds named for two potential lovers are stuck on the the brow or eyelids. The one that stays stuck longer represents the true lover. Women also would pare apples and throw the peels over their shoulders in the hope that the peels would land in the shape of their future husband’s initials. Most of these traditions migrated with immigrants from the British Isles to America between the 17th and 19th centuries.

Another divination tradition, mirror tests, were still going strong in the early 20th century. A girl who sat before a mirror at midnight on Halloween combing her hair and eating an apple would see the face of her true love reflected in the glass. Another mirror rite, popular in the American South well into the 20th century, involved a girl holding a hand mirror and stepping backward from the doorway into the yard, saying, “Round and round, O stars so Fair! Ye travel and search out everywhere. I pray you, sweet stars, now show to me, This night who my future husband shall be!”

Why did divination fall by the wayside as a key component of Halloween celebration in America by the mid-20th century? Perhaps it was too “real.” Gaining an insight into the future may sound beguiling, but it can also be scary as hell – as in real world scary, not Halloween scary. Halloween has become more about artifice, becoming someone or something else by wearing a costume for the evening, watching a scary movie or TV show for vicarious thrills, decorating lavishly using the symbols of the season. And of course, the treats. But divination has real-life implications, and reminds us that not too long ago, spirits interfering with the lives of the living and witches casting damaging spells on the crops or stealing a baby or two were very real, terrifying concerns. It’s much easier if it’s all pretend.